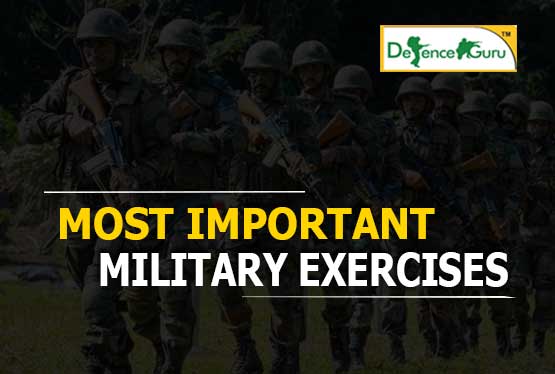 Indian Armed Forces is subdivided into 3 wings namely Indian Army, Indian Navy and Indian Air Force. Today’s article is all about military exercises of the above mentioned 3 branches. So let’s get started.

Defence exercise/ military exercise/ war games refers to the ‘technique of using military resources in training or performing drills of military operations; testing the quickness and real time capabilities of warfare; and adopting strategies without undergoing actual combat. The military exercise is a measure to test the performance of the armed forces without engaging in the battlefield.”  The given definition means that military exercises deal with how you react and what strategies you make to tackle real life problems or real life wars. These exercises aim to know the power of your military abilities.

IMPORTANCE: The importance of Defence exercises are listed below:

Sri Lanka SLINEX- It was started in 2005; was primarily held biannually; from 2018 onwards it has been converted into an annual event.

Frances VARUNA- It started in 1983 between the Armies of India and France. These exercises were later named as Varuna in 2001.

Oman NASEEMAL- BAHR- It is a bi- annual, bilateral exercise between the 2 Navies. It started in 1993. It literally means ‘sea breeze’.

Singapore SIMBEX- It is an annual exercise between the Navies of Singapore and India since 1944. It stands for Singapore India Maritime Bilateral Exercise (SIMBEX).

MISCELLANEOUS EXERCISE: There are some miscellaneous military exercise which are equally important hence take a note of them:

With this the complete detail of Military exercises in Indian armed Forces gets covered. Being a Defence aspirant it’s your task to study them well. Good luck!