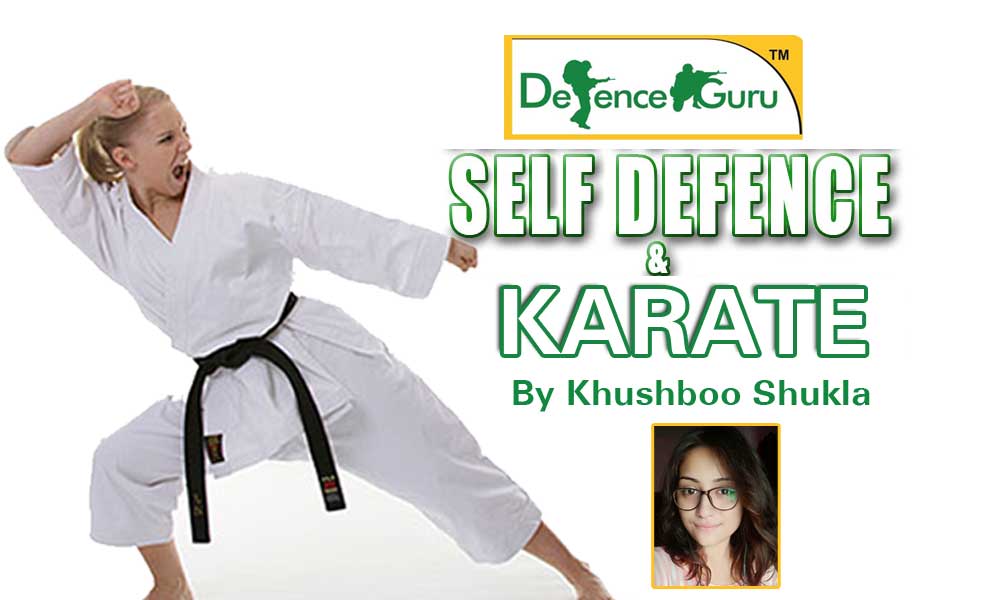 SELF DEFENCE - KARATE - The Martial Art by Khushboo Shukla

This article is for all the fans of Jackie Chan, Bruce Lee, Jaitley and Ninja Turtles.

Firstly let us know What is martial arts?
Martial Arts is an "Art of Combat" or an "Art of Waging War" .It comprises of a set of intricate movements that can be used for offensive or defensive purposes. Most historians believe that Martial Arts first originated in India. During 11th and 12th century AD, there was a popular form of Martial Arts known as Kalaripayattu prevalent in the southern states of India.

Bodhidharma, a famous Buddhist monk, learnt this art in India and when he went to China to propagate Buddhism, he introduced the art of fighting to the Chinese. Later ,by incorporating certain changes in the Kalaripayattu way of fighting ,they gave birth to a new form of Martial Arts known as Shaolin Kung Fu . With the change in time this got divided in various types because need of protecting one self made nearly every culture on thisÂ  Earth to develop its own form of Self Defence and thus giving various forms of Martial Arts. From this came One of the most popular forms of Martial Art thatÂ  is Karate. Karate is said to have originated on the Islands of Okinawa in Japan,thousands of years ago. Since weapons were banned in okinawa,so, the okinawa people developed strong hand fighting techniques.

Now, I am going to talk about Karate as a Self Defence Martial Art because that is what it is .In a world,Â  where we are exposed more and more to the dangers of crime, it is important to know a few self defence moves because no one knows when they might end up in a situation where they have to use them. Through Karate, I have developed the speed to react when someone throws a punch and I have learnt how to get out of grabs and holds. Â

What do I like most about Karate training? I enjoy ,each of its lesson I go to, I am guaranteed to learn something new and no Karate lesson is ever the same.Kicks like Jump Knee Strike, Back Snap Kick, Side Thrust Kick, Flying Side Kick and many more! All Instructors are awesome. They give their own time each week to teach which is really inspiring. Like when we lose hope and strength he always says- "Defeat is a state of mind, no one is ever defeated, until Defeat has been accepted as a reality!"

when we ask to teach something new he replies-" It's not important how many techniques you learn ,but it how many ways you can use one single technique."

Now, I am going to talk about the importance of Karate. Martial Arts increases a lots of things in one's life even if he is an aged.

1-Becoming active and healthy.
2-Gaining self confidence and self respect.
3-By learning offend and defendÂ  which increases the inner potential of the martial artist, motivation gets increased and helps in performing good and movingÂ  forward in every other aspect of life to Grab opportunities.
4- By this focusing power ,responsibility and teamwork will increase.
5-Group Fight teaches usÂ  teamwork.

Self defence is most important for women in India,as they are considered to be the weaker section of Indian society,And are easily targeted .The cases of gender violence are increasingÂ  out of which many cases go unreported. So Self Defence for women has become a necessity more than ever. Rape, molestation,kidnapping and harassment are the most common forms of crime against women in India. The mindset of people, including the victim and the spectators is to ignore and just let it go. But,we, as the responsible citizens of an independent country, should realise that these instances of harassment can fly up into the other heinous crimes against Women, and that is when the importance of learning Self Defence techniques for women is felt.

Women should be aware of the strategies to be adopted on the different adverse circumstances.Women should take precautions to be away from Danger.They may -

1-Note down the number of the cab while travelling alone
2-Enroll themselves for Self Defence classes and learn techniques to physically fight
3-Opt for training in basic Karate,Kick Boxing,Israeli krav Maga and traditional stick fighting.

Self Defence is the Need of the hour, not only for women but also for every individual being so that during any casualty one must be able to safeguard oneself, as it's said "God Helps them, those who help themselves "