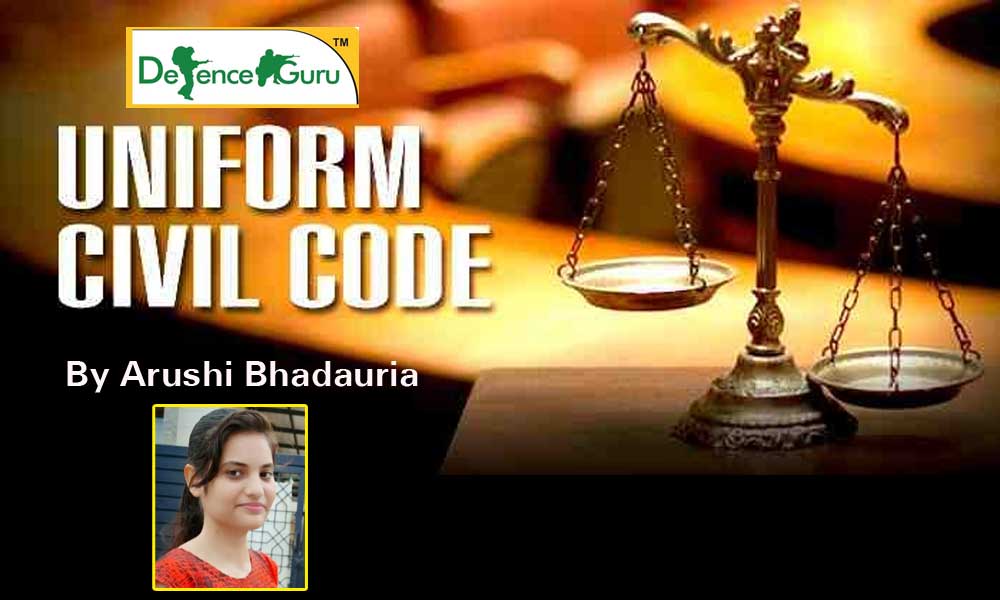 Uniform Civil Code means that only one law is applicable for all the citizens in a country. It is inshrined our constitution under Article 44 of the Directive Principles of State Policy in the Indian constitution.

While constructing the constitution, some intellectual thought that there should be Uniform Civil Code for Indian citizens of every religion. Marriage, succession and adoption comes within its boundaries. It means that only one law will be applicable for all religions concerning marriage, divorce and succession of property. But in present time, people of all religions solve their concerned issues under their own personal law.

When and Why did the need for UCC arise?

When Britishers came into India, they found that here Hindus,Muslims,Sikhs,Christians and people of different religions have different laws related to their religion.For example in Hindu religion Remarriage was restricted for women(which was removed by Hindu widow remarriage act of 1856), child marriage, polygamy was allowed only to men, women were denied succession, the adoption of son was not permitted to women, married women did not have the right to property or in Muslim religion women had some part of succession, triple divorce.
Britishers thought that the Uniform Civil Code should be created for all Indian citizens but because of diversity of religion and their standing on the law of their own religion, they had to leave this Ideology. Due to this in the British Era, Court started disposing of religious disputes on the basis of their own traditional laws.

It was decided that the duly electedÂ  people will decide on tgey matter later. Thus this effort was also unsuccessful.

Later in 1952, after the formation of government for the first time in the constitution, the proceeding started in this direction and on different topics such as marriage, succession etc. and code was created for 'Hindu Marriage Act 1955', apart from this 'The Hindu Succession Act', 'Hindu Adoption Act' and 'Hindu Pupilarity and Guardianship Act' was adopted in 1956. All this acts were brought in to give equal status to women in society. Apart from this women were given rights in the property for the first time these laws were applied on religion of Hindu, Sikh and Christians.

Muslims Religion on the other side, opposed, that there is no need, to make any additional laws for us because laws are already made for us and are called 'Shariyat'. Neither we can go an inch back nor move an inch forward from it.
Most thinkers say that there should be one law in one country whether it is Penal law or Civil law. Apart from Muslims, other religion people were ready for this.

Women believeÂ  that every religion have certain things that is all laws were based on discrimination between men and women. For example the law of succession in Hinduism is entirely based on discrimination; therefore whenever any Uniform Civil law code will be found it will completely Modernize, SeculariseÂ  the conditions and will be Unbiased and Progressive; so therefore it will definitely change the condition of people of every religion.

I believe that it is a good provision and every citizen of India should acceptÂ  it ,because same rules and regulations will create equality and Unity in all citizens of a country .Our country has different religions that's why all religions people want to follow the rules according to their religion. Circulation of different rules for different communities has created discrimination between citizens. People should understand the importance of Uniform Civil Code and should come out of their orthodox believes towards their religions and should support UCCÂ  and favour it for the bright future of India.All citizens of a country should support UCC for the progression of our country and to create equality and Unity in the country.

Note: Goa is the only state in India, where UCC has been applied.