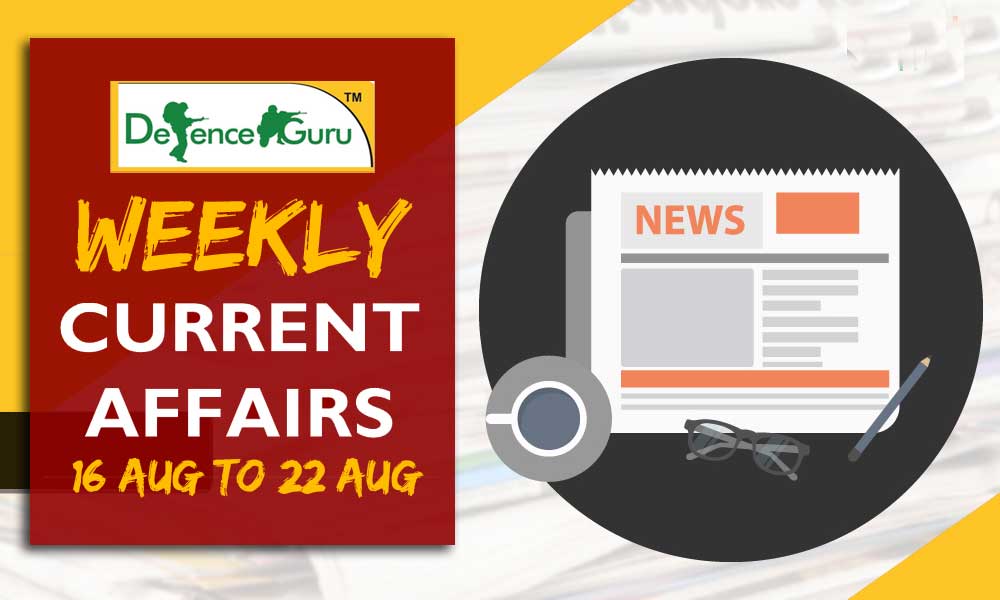 Dear Student, Here Defence Guru given the list of Important Weekly Current Affairs 3rd Week of August 2018. Candidates those who are preparing for NDA, CDS, SSB and other competitive exams can make use of it.

Cricketer-turned-politician Imran Khan will today take oath as the 22nd prime minister of Pakistan.The oath-taking ceremony will begin at around 9.15 am (local time).

5. Mario Abdo Benitez sworn in as the 50th President of Paraguay

Malian President Ibrahim Boubacar Keita has been re-elected for a five-year term after winning election.

7. Chairmen of Canara Bank, Bank of India get extension

The government has extended the terms of office of non-executive chairmen of 2 public sector banks â€“ Canara Bank and Bank of India.

President Ram Nath Kovind has appointed seven new governors, the most significant of which was the appointment of Biharâ€™s governor Satya Pal Malik as the new governor of Jammu and Kashmir.

The appointment is crucial for the state as it is under Presidentâ€™s rule.

The other appointments include:

Three scientists whose work in the fledgling field of immunotherapy has revolutionized cancer treatment are the recipients of this year's Albany Medical Center Prize in Medicine and Biomedical Research.

An official of the Delhi government's health department has been awarded the prestigious WHO World No Tobacco Day 2018 Award for his extraordinary contribution towards tobacco control.

The United States government has awarded the Legion of Merit (Degree of Commander) to General Dalbir Singh Suhag (Retired), of the Indian Army, for exceptionally meritorious service as chief of the Army staff, Indian Army.

Former India Test captain Ajit Wadekar, who led the country to its first win in England in 1971, passed away at 77 after a prolonged illness.

Asian Games gold medallist athlete Hakam Singh passed away at a private hospital in Sangrur, Punjab. He was 64.

A man of masses, veteran leader and Former Prime Minister Bharat Ratna Atal Bihari Vajpayee passed away in New Delhi. The 93-year-old veteran leader breathed his last at 5.05 PM at AIIMS where he was admitted for treatment.

Aretha Franklin, the â€œqueen of soulâ€ known for hits like Respect and Think, has died in Detroit at the age of 76.

Gurudas Kamat, former Union minister and senior Congress leader, passed away after suffering a cardiac arrest. He was 63.

19. Shane Warne to come out with autobiography in October

Spin legend Shane Warne will talk about his extraordinary cricketing career and his life off the pitch besides unveiling several unknown facts in his autobiography which will be published this October.

Veteran cricketer VVS Laxman, known for the suppleness of his wrists, will now write his tell-all book, which will hit the stands on November 20.

The Pakistan Cricket Board (PCB) has handed a 10-year ban to Nasir Jamshed on 17 August.

The 2018 Asian Games, officially known as the 18th Asian Games and also known as Jakarta Palembang 2018, is a pan-Asian multi-sport event scheduled to be held from 18 August to 2 September 2018 in the Indonesian cities of Jakarta and Palembang.

Bajrang Punia opened India's gold medal account at the 2018 Asian Games, bringing smiles and relief to the Indian camp which was jolted by the early exit of star wrestler Sushil Kumar.

The Indian womenâ€™s team were crowned champions of the SAFF U-15 Championship after defeating defending champions Bangladesh by a solitary goal.

Former world number one Novak Djokovic became the first player to win all nine Masters 1,000 tournaments with victory over Roger Federer in Cincinnati.

Vinesh Phogat won the gold medal and the country's fifth medal at the ongoing 2018 Asian Games.

Saurabh Chaudhary, all of 16, became the youngest Indian shooter to win an Asian Games gold medal as he trumped a field comprising multiple world and Olympic champions in the 10m air pistol finals.

PV Sindhu broke into the top 10 paid female athletes list in the world, according to an annual list published by Forbes.

The World Congress of Philosophy is organized every five years by the International Federation of Philosophical Societies (FISP) in collaboration with one of its member societies.

World Photography Day is observed worldwide on 19th of August every year with a lot of zeal and enthusiasm.

The 11th World Hindi Conference, an event aimed at expanding the reach of the Hindi language at a global level, begins in Mauritius.

33. Tower in Mauritius to be named after late PM Vajpayee

During the World Hindi Conference being held in Mauritius, the Mauritian PM Pravind Jugnauth announced that the cyber tower which Atal Ji had contributed to set up in Mauritius will henceforth be named as Atal Bihari Vajpayee tower.

The first-ever joint air exercise involving the Indian Air Force and the the Royal Malaysian Air Force commenced at Subang Air Base in Malaysia.

The Kempegowda International Airport (KIA), Bengaluru has been ranked as the second fastest growing among top 20 major airports in the world during the first half of 2018.

The Food Safety and Standards Authority of India (FSSAI) on Friday launched RUCO (Repurpose Used Cooking Oil), an initiative that will enable collection and conversion of used cooking oil to bio-diesel.

Hollywood star Scarlett Johansson has become the best-paid actress in the world, according to Forbes magazine.

43. Rajasthan to observe September as 'month of nutrition'

Rajasthan will observe September as the â€œmonth of nutritionâ€ to create awareness among people living in the state, Chief Minister Vasundhara Raje said.

In the wake of Honâ€™ble Prime Ministerâ€™s vision for creating digital museums at stations using QR code,Ministry of Railway has made â€œdigital screensâ€ operational at 22 stations on this Independence Day as an innovative low cost solution to spread awareness among public about the opulent heritage of Indian Railways.

Bill for red-labelling of packaged products containing fat, sugar and salt has been halted by the government as per FSSAIâ€™s report.

INS Khanjar a Missile Corvette of Indian Navy was on a three-day visit to Yangon, Myanmar to undertake operational turn around (OTR) and as part of goodwill visit from 18 to 20 Aug 18.

56. Cyclone Warning Centre to be set up in Thiruvananthapuram

With several incidents of tropical cyclones and severe weather events striking over Kerala and Karnataka coasts in the recent times, the Union Ministry of Earth Sciences is proposing to set up a Cyclone Warning Centre in Thiruvananthapuram.

Kerala Chief Minister Pinarayi Vijayan announced that the UAE has offered assistance of Rs 700 crore ($100 million) to aid relief efforts in the state ravaged worst monsoon in close to a century.

59. Atal Bihari Vajpayee memorial to be built in Mumbai

State run Rural Electrification Corporation said it has inked a loan agreement with German bank KfW for EUR 200 million facility that would be used to finance clean energy projects in India.

Tata Consultancy Services has pipped Reliance Industries Limited (RIL) to regain the crown of India's most valued company in terms of market capitalisation.

The National Payments Corporation of India (NPCI) has launched Unified Payments Interface (UPI) 2.0, which among others allows customers to link their overdraft account to UPI.

The Receivables Exchange of India (RXIL) said Hindustan Aeronautics (HAL) has become the first public sector enterprise to make a transaction on the "TReDS platform".

Finance Commission held its second consultation with the leading economists at YASHDA, Pune on 21stAugust 2018.