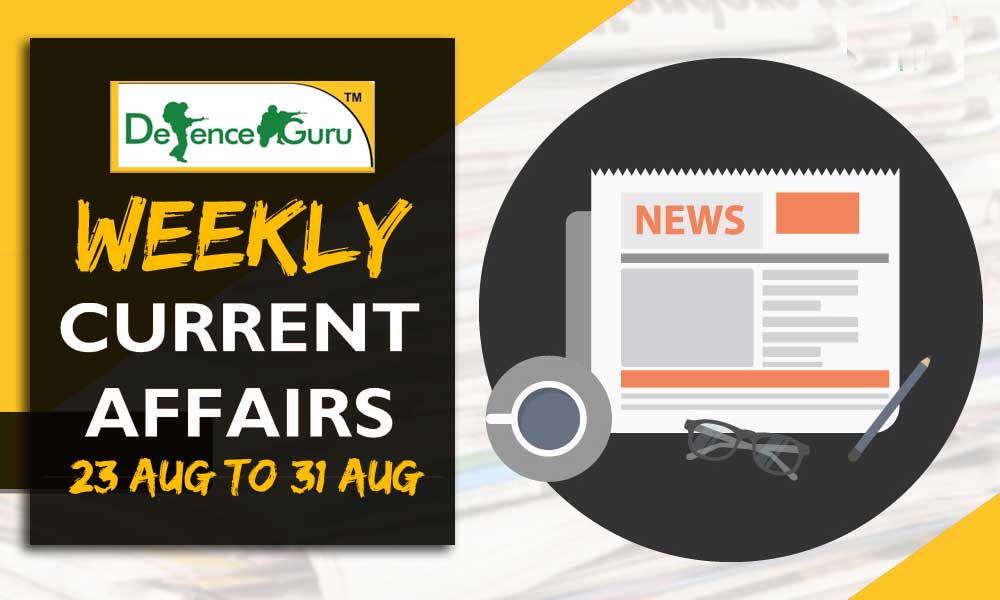 Dear Student, Here Defence Guru given the list of Important Weekly Current Affairs 4th Week of August 2018. Candidates those who are preparing for NDA, CDS, SSB and other competitive exams can make use of it.

The Government has appointed eminent scientist Dr. G. Satheesh Reddy as the Chairman of the Defence Research and Development Organisation (DRDO).

Scott Morrison has become Australia's new prime minister after Malcolm Turnbull was forced out by party rivals in a bruising leadership contest.

Ganga Prasad has sworn in as the 16th Governor of Sikkim at a function held at Raj Bhawan.

Baby Rani Maurya was sworn in as the new governor of Uttarakhand.

Emmerson Mnangagwa has taken the oath as Zimbabwe's president, after winning last month's bitterly contested election that marked the country's first vote since Robert Mugabe was removed from power.

8. Indra Nooyi to be honored with Asia Societyâ€™s Game Changer of the Year 2018 award

PepsiCoâ€™s India-born CEO Indra Nooyi will be honoured with the Game Changer of the Year award by a global cultural organisation in recognition of her business achievements, humanitarian record and advocacy for women and girls around the world.

Veteran journalist and former Rajya Sabha member Kuldip Nayar passed away after a brief illness. He was 95.

Former Bengal cricketer Gopal Bose who also played a single ODI for India has passed away in London. He was 71.

The Vice President of India, Shri M. Venkaiah Naidu has said that Share and Care is the core philosophy of our nation.

â€œAtal Ji Ne Kahaâ€ is the latest of the books on former Prime Minister Atal Bihari Vajpayee launched with a message by Prime Minister Narendra Modi, who says the life of the stalwart from Jana Sangh days to â€œsanyasâ€ from politics in 2007 is a golden document, dedicated to the nation.

Veteran Indian women's team pacer Jhulan Goswami has announced her retirement from T20 Internationals, effectively ruling her out for the ICC World T20 in West Indies in November.

Neeraj Chopra continued his impressive run in 2018 as he bagged gold in men's javelin throw at the 2018 Asian Games in Jakarta and Palembang.

The third edition of Indian Ocean Conference is set to begin on August 27 at Hanoi, the capital of Vietnam.

At the G20 Digital Economy Ministerial Meeting in Salta, in the north-west of Argentina, G20 ministers and senior officials issued a declaration that reflects the G20â€™s commitment towards promoting â€œpolicies and actions that catalyze digital transformations.

The 4th Summit of the Bay of Bengal Initiative for Multi-Sectoral Technical and Economic Cooperation (BIMSTEC) kicked off at Kathmandu, Nepal.

After having been deployed to the South China Sea and Pacific Ocean for over four months, which included representing Indian Navy in multinational exercises MALABAR 18 at Guam and RIMPAC 18 at Hawaii, INS Sahyadri entered the Port of Darwin, Australia on 29 Aug 18 to participate in Exercise KAKADU 2018.

The Union Minister of State for Ministry of Development of North Eastern Region (I/C), MoS PMO, Personnel, Public Grievances & Pensions, Space and Atomic Energy Dr. Jitender singh said that Government is committed to strength the democratic procedures and institutions by ensuring equality of opportunity to all.

The 24th Delhi Book Fair opened at the Pragati Maidan but it looked a scaled down affair with the stalls occupying just one hall this year.

The Odisha Government has tied up with Japan for its mega investment Conclave 2018 to take place in November this year.

Recognizing the uniqueness of the Himalayas and the challenges for sustainable development, NITI Aayog had set up 5 Working Groups (WGs) in June 2017 to prepare a roadmap for actions in 5 thematic areas.

34. National level workshop for celebrating the month of September as Rashtriya Poshan Maah

The Ministry of Women and Child Development, Government of India organized an orientation workshop for various stakeholders participating in the Poshan Maah (National Nutrition Month) being celebrated in the month of September.

Union minister Arun Jaitley has resumed charge of the ministries of finance and corporate affairs after a hiatus of over 100 days, during which he underwent a surgery for kidney ailment.

Indian Air Force is celebrating its 86th Anniversary on 08 Oct 2018. To commemorate this event, IAF has launched a unique event in the form of Trans-Himalayan Mountain Terrain Biking Expedition (THE MTB).

Solar Energy Corporation of India Limited (SECI) conducted Indiaâ€™s first auction of wind power projects in February 2017 in which tariff of Rs. 3.46 was discovered, which was much lower than feed in tariffs in vogue those days.

MGR Centenary Film Studio, the tallest such structure in the country, was inaugurated by Tamil Nadu Chief Minister K Palaniswami.

Prime Minister Narendra Modi will launch the second phase of the FAME India scheme offering incentives for mass adoption of electric vehicles with an outlay of Rs 5,500 crore on September 7.

India would join the elite club of nations who have operated a flight on alternative energy source like biofuel.

Odisha Chief Minister Naveen Patnaik today launched a programme aimed at identifying and giving recognition to the young achievers of the state.

A historic flight powered by indigenously produced aviation biofuel based on patented technology of CSIR-IIP Dehradun was flagged off from Dehradun airport by Uttarakhand CM Shri Trivendra Singh Rawat.

45. MoU signed for skill development of Arogya mitras under the PMJAY

46. Gadkari to Sign MOU With CMs of Uttarakhand, UP, HP, Rajasthan, Haryana and Delhi

The National Sports Day in India is celebrated on 29 August each year.

The Cabinet Committee on Economic Affairs, chaired by the Prime Minister Shri Narendra Modi has given its approval for the umbrella scheme â€œOcean Services, Technology, Observations, Resources Modelling and Science (O-SMART)â€, for implementation during the period from 2017-18 to 2019-20 at an overall cost of Rs.1623 crore.

National Highways Authority of India did a financial closure of its first Toll-Operate-Transfer project with the India chief of Macquarie handing over a cheque for Rs 9,681.5 crore to Shri Nitin Gadkari, Minister of Road Transport & Highways, Shipping, Water Resources, River Development & Ganga Rejuvenation at an event in New Delhi.

53. INS Teg Lends Assistance to MV Vela in the Gulf of Aden

On 25 Aug 18, whilst patrolling in the piracy infested waters of Gulf of Aden, INS Teg, a warship of the Western Naval Command, received a call from a Combined Task Force aircraft for providing assistance to MV Vela, a Norwegian owned ship with an all Indian crew.

55. AFSPA extended for 6 months in Assam

The Assam government has extended application of the controversial Armed Forces (Special Powers) Act, 1958 (AFSPA) in the state for six more months with immediate effect.

Chandrayaan-2, ISRO's "most complex mission", is scheduled to be launched in January next year after experts suggested changes to avert failure, its chief K Sivan said.

In order to meet the challenge of providing sustainable livelihoods for a rapidly growing population and to motivate and attract youth in agriculture, Dr. Trilochan Mohapatra, Secretary (DARE) & Director General (ICAR), inaugurated a two-day conference at NASC, New Delhi from 30-31 August, 2018 on Motivating and Attracting Youth in Agriculture (MAYA).

58. Launch of National Mission on GeM

National Mission on Government e Marketplace (GeM) will be launched on 5th September 2018 to accelerate the adoption and use of GeM by major central Ministries, State Governments and their agencies.

59. No free rail insurance from Sep 1

The Indian Railways will not provide free travel insurance to its passengers starting September 1.

Akshay Kumar-fronted "Gold" has become the first Bollywood film ever to release in Saudi Arabia.

Punjab National Bank has said that a Department of Financial Services report has rated it as number one state-owned bank in terms of digital transactions.

Prasar Bharati and Mizzima Media of Myanmar signed a Memorandum of Understanding.

The Government of India and the World Bank signed a $220 million Loan Agreement and a $80 million Guarantee Agreement for the India Energy Efficiency Scale-Up Program.

The Union Cabinet has approved additional funding of Rs 635 crore for India Post Payments Bank (IPPB), which is set to be launched on September 1 to provide financial services to those living in rural areas.

The Asian Development Bank (ADB) and the Government of India signed a $346 million loan to finance improvement of over 400 kilometers of state highways that will enhance connectivity and access to economic centers across 12 districts in Karnataka.

Government of India and the Asian Development Bank (ADB) signed a $375 million loan agreement to contribute to double farming incomes in Madhya Pradesh by expanding irrigation networks and system efficiency.

HDFC Bank has announced that it will adopt 30 villages in flood-hit Kerala as part of its long-term relief and rehabilitation efforts.