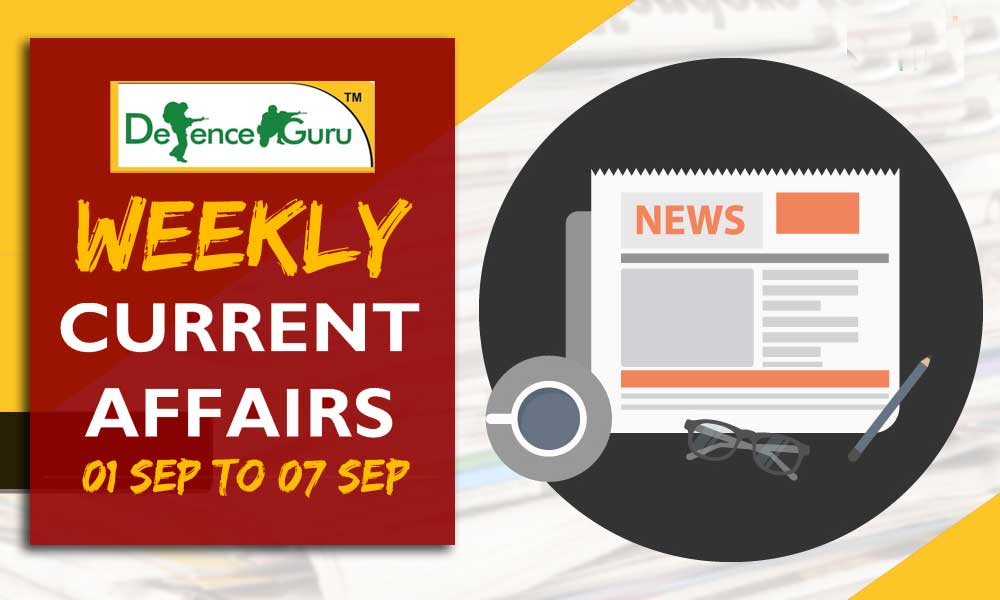 Dear Student, Here Defence Guru given the list of Important Weekly Current Affairs 1st Week of September 2018. Candidates those who are preparing for NDA, CDS, SSB and other competitive exams can make use of it.

The Reserve Bank of India gave its approval for the re-appointment of Rana Kapoor â€œtill further noticeâ€ as the Managing Director and CEO of the Yes bank.

Sunil Mehta, Managing Director and CEO, Punjab National Bank, was elected as the Chairman of Indian Banksâ€™ Association (IBA) for the year 2018-19 at the associationâ€™s managing committee meeting held on August 31.

Binoy Kumar, IAS (TG:83) has taken over as Secretary, Ministry of Steel, Government of India.

Justice Tahira Safdar was sworn in on as the first woman chief justice of a Pakistani high court.

6. Justice Ranjan Gogoi to take charge as the new Chief Justice of India

Justice Ranjan Gogoi is set to take over as the new Chief Justice of India on October 3, 2018.

7. ICICI Bank reappoints Chanda Kochhar on board of ICICI Securities

ICICI Bank has reappointed Chanda Kochhar as a director on the board of ICICI Securities during its annual general meeting.

Dr Arif Alvi, a close ally of Prime Minister Imran Khan and one of the founding members of the Pakistan Tehreek-e-Insaf party, was elected as the new President of Pakistan.

India has retained the top WHO position in South-East Asia Region with DrPoonam Khetrapal Singh unanimously re-elected as Regional Director for another five-year term beginning February 2019.

Eminent neurosurgeon Dr B.K. Misra has been named for this year's prestigious Dr B.C. Roy National Award as an Eminent Medical Person of the Year.

Actors Shabana Azmi and Nandita Das were among 13 others who were awarded the Bharatiya Manavata Vikas Puraskar for their contribution to the society and championing the cause of equity, social justice and human welfare.

Popular Jain monk Tarun Sagar passed away at Radhapuri Jain Temple in east Delhi after a prolonged illness. He was 51.

The Prime Minister, Shri Narendra Modi, released the book â€œMoving On, Moving Forward â€“ A Year in Officeâ€ to mark one year in office of Vice President Venkaiah Naidu.

The Vice President of India, Shri M. Venkaiah Naidu has said that we should salute the constitution-framers for giving us a constitution that strengthened parliamentary democracy and stood the test of times, even as it evolved through several amendments.

Alastair Cook, England's leading Test run-scorer, is to retire from international cricket after fifth Test against India, the 33-year-old has annoucned.

19. Subramaniam Badrinath Retires From All Forms Of Cricket

Former India and Tamil Nadu batsman Subramaniam Badrinath has announced his retirement from all forms of cricket.

Minister of State, (IC), for AYUSH Shri Shripad Yesso Naik will be inaugurated the Fourth International Ayurveda Congress (IAvC) at Netherlands on September 1.

India along with 23 other nations, would be participating in a major Indian ocean-wide tsunami mock exercise (drill) on September 4 and 5.

Two antique statues worth hundreds of thousands of dollars stolen from India and displayed at two American museums have been repatriated to India by the US.

Facebook has announced it will pour in more than S$1.4 billion to construct its first data centre in Asia in Singapore.

The Seventh meeting of National Medicinal Plants Board (NMPB) of Ministry of AYUSH was held under the chairpersonship of Minister of State for AYUSH, Shri Shripad Yesso Naik at New Delhi on 30th August 2018.

The Central Statistics Office has released the estimates of GDP for the first quarter (Q1) of 2018-19.

34. National Conference being Organised by The Supreme Court Advocates on Record Association

The Union Home Minister Shri Rajnath Singh chaired first review meeting of the Department of Official Language of MHA to discuss the functioning and issues related to implementation of Hindi language in official work.

The Competition Commission of India (CCI) has found that KFCC and others have acted in concert and impeded entry and screening of dubbed movies and in particular the Informantâ€™s film â€“â€œSathyadev IPSâ€ in State of Karnataka, thereby violating the provisions of section 3(1) and section 3(3)(b) of the Competition Act, 2002.

37. Jharkhand's railway station, town to be renamed after Lord Krishna

The Union Ministry of Home Affairs has cleared the Jharkhand government's proposal to rename a railway station in Garhwa district after Lord Krishna.

The national capital will host an international chess tournament for school students next year which will be jointly organised by the governments of Delhi and Moscow, Education Minister Manish Sisodia said.

Union Minister of Commerce & Industry and Civil Aviation, Suresh Prabhu said that demand for energy will increase due to rapid development taking place in India and fossil fuel is not going to last forever and therefore there is need for renewable energy.

Every year, September 5 is observed as Teachersâ€™ Day in India to mark the birth anniversary of Dr Sarvepalli Radhakrishnan, who was born on September 5, 1888.

Indo-Kazakhstan Joint Army Exercise 'KAZIND' will be conducted between the Indian and Kazakhstan Army from 10 to 23 Sep 2018 in Otar region, Kazakhstan.

A Conference on â€œE-Mobility in Indian Railwaysâ€ organized by Ministry of Railways through Institution of Railways Electrical Engineers (IREE) in association with NITI Aayog concluded in New Delhi.

The President of India, Shri Ram Nath Kovind, reached Bulgaria on September 4, 2018 on the second leg of his state visit to three European nations â€“ Cyprus, Bulgaria and the Czech Republic.

The Cabinet Committee on Economic Affairs, chaired by the Prime Minister Shri Narendra Modi has approved continuation of the Centrally Sponsored Umbrella Scheme of Integrated Development of Wildlife Habitats (CSS-IDWH)beyond the 12thPlan period from 2017-18 to 2019-20.

49. Vice President to visit US to participate in 2nd World Hindu Congress

The Vice President of India, Shri M. Venkaiah Naidu to visit United States of America on September 8-9, 2018 to address the 2nd World Hindu Congress being held in Chicago on the occasion of 125th Anniversary of Swami Vivekanandaâ€™s Historic Speech at the Parliament of the World's Religions in 1893.

31st meeting of the Central Hindi Committee was held in New Delhi under the chairmanship of Prime Minister Shri Narendra Modi.

India is the Partner Country in the 87th Izmir International tradeshow which begins in Turkey from September 7, 2018.

52. Centenary of the Battle of Haifa Celebrated

The Embassy of India held a ceremony in Haifa to mark the Centenary of the Battle of Haifa.

The Union Home Minister Shri Rajnath Singh has called upon the law enforcement agencies to adopt new technologies to enhance their capacities to contain terror and to counter the emerging challenges to homeland security.

54. Indiaâ€™s First Global Mobility Summit 2018 to be inaugurated by the Prime Minister

The Reserve Bank of India (RBI) has cancelled the licence of Bhilwara Mahila Urban Co-operative Bank Ltd., Bhilwara, Rajasthan to carry on banking business, with effect from the close of business on August 31, 2018.

ITI Limited signed agreements with leading startups and original equipment manufacturers (OEMs) covering the manufacturing of a wide range of ICT-IOT based solutions.

To provide relief to the households having annual income up to Rs 3 lakh in rural areas and up to Rs 6 lakh in urban areas in the floods-hit state of Kerala, National Housing Bank (NHB) has announced a refinance assistance of Rs 200 crore.

India will purchase 18 bullet train sets from Japan at a total cost of about Rs 7,000 crore in a deal that includes a pledge to transfer technology for local production.