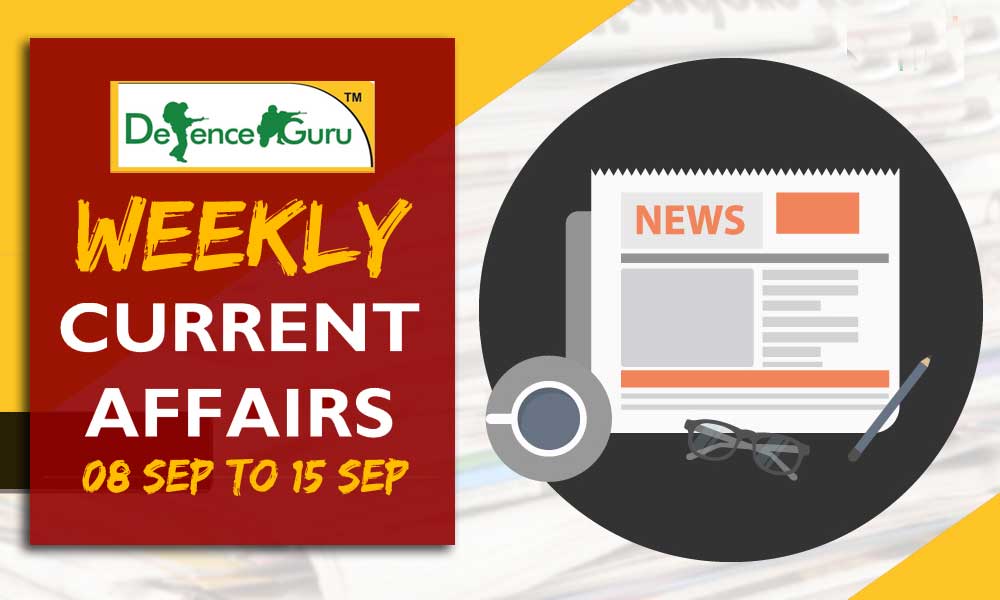 Dear Student, Here Defence Guru given the list of Important Weekly Current Affairs 2nd Week of September 2018. Candidates those who are preparing for NDA, CDS, SSB and other competitive exams can make use of it.

The Executive Committee of the Society of Indian Automobile Manufacturers (SIAM), the apex body of the Indian automotive industry, elected Rajan Wadhera as its new President.

The government has appointed a panel under former Reserve Bank of India governor Bimal Jalan to select the next chief economic adviser in the finance ministry.

Ending the speculation around the appointment of its next head once Shikha Sharma demits office, Axis Bank chose Amitabh Chaudhry, 54, as the next CEO.

State Bank of India has said the Government has appointed Anshula Kant as Managing Director of the Bank.

Jack Ma will step down as executive chairman of Alibaba Group Holding Ltd. in exactly 12 months time with Chief Executive Officer Daniel Zhang to succeed him at Asiaâ€™s most valuable company.

6. Justice Ranjan Gogoi appointed as next Chief Justice of India

The President of India has appointed Justice Ranjan Gogoi as the next Chief Justice of India.

HDFC Standard Life Insurance has appointed Vibha Padalkar as its new Managing Director and CEO for a period of three years.

Noted Odia poet Satrughna Pandav will be honoured with the prestigious 'Sarala Puraskar' for his poetry collection 'Misra Dhrupad'.

Rajalakshmi Nandakumar, an India-born woman scholar in the US, has been chosen for a prestigious award for her work to help detect potentially life-threatening health issues using smartphones.

Jaipur-based poet and writer Sawai Singh Shekhawat will be honoured with Meera Puruskar by Rajasthan Sahitya Academy for his contribution to Hindi literature.

Six aerodromes of the Airports Authority of India have bagged seven international awards.

India Blue thrashed defending champion India Red by an innings and 187 runs in the final to win the Duleep Trophy.

Assam government has made Asian Games medalist Hima Das as the Sports Ambassador of the state.

International Literacy Day is celebrated annually on September 8 across the world.

The UN postal agency will issue special stamps here next month to commemorate the festival of Diwali.

The Inaugural Military Field Training Exercise for the Bay of Bengal Initiative for Multi Sectoral Technological and Economic Cooperation nations named MILEX-18 scheduled from 10 September 18 to 16 September 18 started with a Grand Opening Ceremony on 10 September 18 at Aundh Military Station.

A two-day India-UAE Partnership Summit (IUPS) will be held in Dubai from October 30.

India climbed one spot to 130 among 189 countries in the latest human development index released by the United Nations Development Programme.

28. Suresh Prabhu to participate in G-20, Trade and Investment Ministerial Meeting in Argentina

Union Minister of Commerce & Industry and Civil Aviation, Suresh Prabhu, will participate in the G-20, Trade and Investment Ministerial Meeting, being held in Mar del Plata in Argentina on 14th â€“ 15thSeptember 2018.

The Dhaka based India-Bangladesh Chamber of Commerce (IBCCI) will participate with a strong contingent of F&B buyers in Indusfood-II 2019 to source their food and beverage requirements from India.

Indian Naval Ships Kirch, Sumitra and Cora Divh entered Trincomalee, Sri Lanka to participate in the sixth edition of SLINEX 2018, a bi-lateral Naval Exercise between India and Sri Lanka, from 07 to 13 September 2018.

The Union Home Minister Shri Rajnath Singh inaugurated the 6th International Geriatric Orthopaedic Society of India Conference on the theme â€œIncreased Longevity with Reduced Fragility and Enhanced Mobilityâ€, at the All India Institute of Medical Sciences.

The Department of Administrative Reforms and Public Grievances (DAR&PG), Government of India in association with Government of Madhya Pradesh is organizing a Regional Conference on Good Governance with Focus on Aspirational Districts, in Bhopal.

Public panic buttons and all-women police patrol teams will soon be launched in eight major cities, including Delhi, under a special women safety programme for which the home ministry has approved nearly Rs 3,000 crore.

A member of the Niti Aayog, Dr Vinod Kumar Paul said that the treatment of childhood cancer will be covered under the Pradhan Mantri Jan Arogya Yojana.

As part of India's reachout to Africa, the External Affairs Ministry signed an agreement with the Telecommunications Consultants India Ltd. (TCIL) to establish a pan-African e-network between the two nations.

In a significant achievement and a major step towards Final Operational Clearance (FOC) of LCA Tejas, the mid-air refuelling of â€˜wet contactâ€™ trial for LCA Tejas MK-1 was successfully carried out from an Indian Air Force base.

Bihar and Nepal are now connected by bus. Bihar Chief Minister Nitish Kumar flagged off the first bus service between Bihar and Nepal.

The first of its kind university in the country on the transport sector, the National Rail and Transportation Institute (NRTI), started operations this week.

As part of the ongoing Indo-US defence cooperation, a joint military training Exercise Yudh Abhyas 2018 is scheduled to be conducted in the foothills of Himalayas at Chaubattia in Uttarakhand from 16 September to 29 September 2018.

The Delhi Government and the Seoul Metropolitan Government are slated to sign an agreement this week for cooperation in urban regeneration.

Giving a major boost to the pro-farmer initiatives of the Government and in keeping with its commitment and dedication for the Annadata, the Union Cabinet chaired by Prime Minister Shri Narendra Modi has approved a new Umbrella Scheme â€œPradhan Mantri Annadata Aay SanraksHan Abhiyanâ€™ (PM-AASHA).

The Cabinet Committee on Economic Affairs, chaired by the Prime Minister Shri Narendra Modi has approved continuation of the Capacity Development Scheme for the period 2017-18 to 2019-20 with an outlay of Rs 2,250 crore.

45. First Tribal Circuit Project under Swadesh Darshan Scheme to be inaugurated in Chhattisgarh

In a major shot in the arm for paramilitary and police forces, scientists at a central research institute claim to have developed Indiaâ€™s first indigenous medical kit that may ensure protection from serious injuries and faster healing of wounds resulting from nuclear warfare or radioactive leakage.

Hindi Divas or Hindi day is an annual day celebrated on 14 September in India.

The World Cultural Culinary Heritage Committee, under the aegis of the World Association of Chefs' Societies (WorldChefs), will hold the first edition of the World Heritage Cuisine Summit and food festival from October 12-14 at the Qila Gobindgarh in Amritsar.

Uttarakhand has been ranked the best among states in the country for the construction of maximum number of roads under the PMGSY during 2017-2018.

52. India to hold its first global tourism mart from Sep 16

53. India and France sign an implementation agreement on â€œMOBILISE YOUR CITYâ€

India and France have signed an implementation agreement on â€œMOBILISE YOUR CITYâ€ (MYC) in the presence of Minister of State (I/C), Ministry of Housing & Urban Affairs (MoHUA) Shri Hardeep Singh Puri and Shri Alexander Ziegler, Ambassador of France in India.

The Reserve Bank in three separate releases said it has imposed a penalty of Rs 1 crore each on the three banks of Union Bank of India (UBI), Bank of India and Bank of Maharashtra.

Life Insurance Corporation of India has signed an agreement with Central Depository Services (India) to provide group insurance coverage to all eligible demat account holders serviced through depository participants associated with it.

NITI Aayog, Intel, and Tata Institute of Fundamental Research (TIFR) announced on 7th September that they are collaborating to set up a Model International Center for Transformative Artificial Intelligence (ICTAI) towards developing and deploying AI-led application-based research projects.

The Union Cabinet chaired by Prime Minister Shri Narendra Modi has given its ex-post facto approval for the Memorandum of Understanding (MoU) on Collaborative Research on Distributed Ledger and Block chain Technology in the context of Development of digital economy by Export-Import Bank of India (Exim Bank).

Federal Bank, which is in the process of formation of a wholly owned subsidiary company, has executed MOU with Infopark Kakkanad for leasing space in their campus.