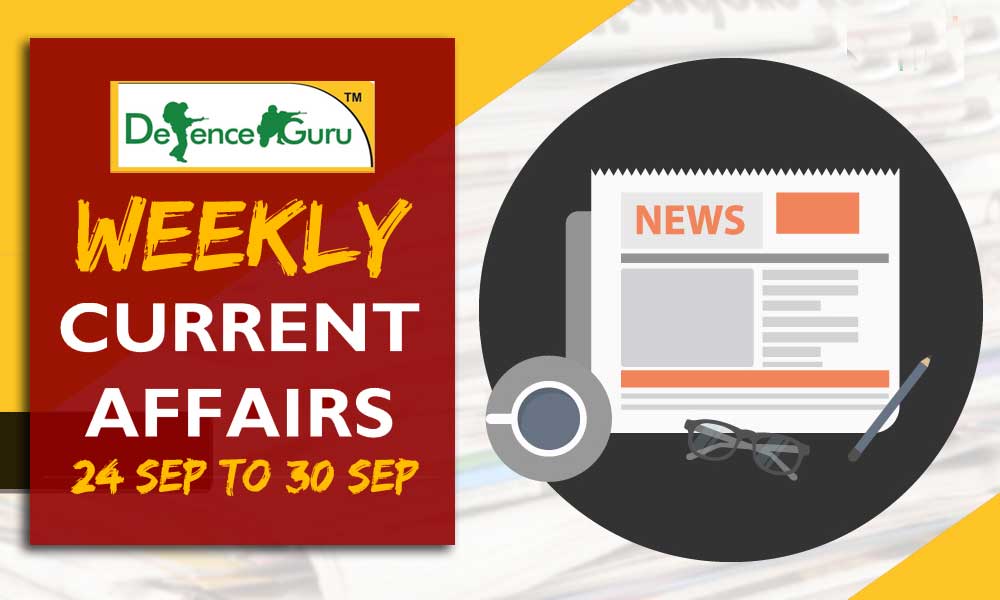 Former Member of Parliament and Bollywood actress Jaya Prada has been appointed Goodwill Ambassador for the promotion of Nepal tourism.

3. B. S. Mubarak appointed as next Ambassador of India to Republic of Guatemala

Shri B. S. Mubarak (IFS:2001) has been appointed as the next Ambassador of India to the Republic of Guatemala.

Anil Kumar Chaudhary has been appointed as the new chairman of the Steel Authority of India (SAIL).

The Supreme Court has constituted a three-member committee to recommend measures on prison reforms.

7. Anil Khosla to be appointed as new Vice Chief of Air Force

Air Marshal Anil Khosla will be appointed as the new Vice Chief of the Indian Air Force.

The Centre constituted an eight-member search committee, to be headed by former Supreme Court judge Justice Ranjana Prakash Desai, to recommend the chairperson and members of the anti-corruption ombudsman Lokpal.

10. Vikram Misri next ambassador to China

The government has notified that Vikram Misri would be the new Indian envoy to Beijing.

Facebook has announced the appointment of Ajit Mohan as the Managing Director and Vice President of of its India wing.

Filmmaker Kalpana Lajmi passed away after a long battle with kidney cancer. She was 64.

Vietnam President Tran Dai Quang, one of the countryâ€™s top three leaders, died after an illness. He was 61.

The legendary harmonium artiste Pandit Tulsidas Borkar passed away in Mumbai on 28 September 2018, after a brief illness. He was 83.

Andhra Pradesh has topped the charts among States in terms of â€œEase of Living Indexâ€ rankings launched by the Ministry of Housing and Urban Affairs (MoHUA).

Real Madrid and Croatian midfielder Luka Modric ended a decade-long dominance of Cristiano Ronaldo and Lionel Messi on the FIFA Best Men's Player Award as he take the trophy at an award ceremony in London.

18. PM Modi gets UN's 'Champions of the Earth' award

Prime Minister Narendra Modi has been awarded with the UNâ€™s highest environmental honour, bestowed upon five other individuals and organisations, for his leadership of the International Solar Alliance and pledge to eliminate single use plastic in India by 2022.

The Womenâ€™s Boxing World Championships, to be hosted by India after more than a decade, will be held from November 15-24, 2018, in New Delhi.

Thiruvananthapuram is all set to play host to the 8th Asian Yoga Sports Championship, which will be held at the Jimmy George indoor stadium from September 27 to 30.

The Womenâ€™s Boxing World Championships, to be hosted by India after more than a decade, will be held from November 15-24, 2018, in New Delhi.

Thiruvananthapuram is all set to play host to the 8th Asian Yoga Sports Championship, which will be held at the Jimmy George indoor stadium from September 27 to 30.

26. AYUSH Information Cell set up at the Indian Embassy in Romania

Ministry of AYUSH has set up an AYUSH Information Cell at the premises of the Indian Embassy in Romania to disseminate authentic information about AYUSH system of medicine and encourage Ayurveda practice in Romania.

India ranks 158th in the world for its investments in education and healthcare, a survey of 195 countries has revealed.

28. Exhibition â€œIndia - Uzbekistan: Dialogue of Culturesâ€ inaugurated in the Capital

30. First assembly of ISA to be held in India

31. NITI Aayog to Organize Conference on Empowerment of Women SHGs

NITI Aayog is organizing a Conference on Empowerment of Women SHGs & Organic Farmers Co-operatives from Dantewada, Bastar Region on September 26 at NITI Aayog in collaboration with the Tribal Affairs Ministry and Tribal Co-operative Marketing Development Federation of India, TRIFED.

A statue of Nelson Mandela has been unveiled at the United Nations to honour the late South African leaderâ€™s birth.

A bilateral meeting was held in Dhaka between Commerce Minister of Bangladesh, Tofail Ahmed, MP and Commerce & Industry and Civil Aviation Minister of India, Suresh Prabhu.

In this yearâ€™s report on Economic Freedom in the World, Indiaâ€™s rank improved by a couple of notches.

China will hold the fifth World Internet Conference (WIC) in November which is expected to be attended by delegates from several countries and international organisations.

World Heart Day is celebrated every year on September 29, Organised by the World Heart Federation.

â€œInternational Day of Sign Languagesâ€ was celebrated by Indian Sign Language Research and Training Centre (ISLRTC) under Department of Empowerment of Persons with Disabilities (Divyangjan), Ministry of Social Justice and Empowerment on 23 September.

The Vice President of India, Shri M. Venkaiah Naidu has said that Indian food heritage is a mixture of art and science and is exceptionally vast and diverse.

42. 4th India International Science Festival to be inaugurated by President of India

The fourth edition of India International Science Festival will be inaugurated by President of India in Lucknow on October 6, 2018.

43. 21st meeting of Central Regional Council held under the chairmanship of Union Home Minister
Union Home Minister Shri Rajnath Singh has said that regional councils have an important role in resolving issues related to the public by increasing cooperation between the Center and the states.

The Vice President of India, Shri M. Venkaiah Naidu has said that the creation of pedestrian non-motorized zones is the need of the hour curb traffic congestions.

Tribes India and TRIFED under the Ministry of Tribal Affairs launched â€œPunch Tantra Collection and Ms. Mary Kom as Brand Ambassador of Tribes Indiaâ€ at a function.

51. India and the United Nations to sign a Five-Year Sustainable Development Framework

52. Twenty Embryo Transfer Technology (ETT) centres are being established in the country

Twenty Embryo Transfer Technology Centres are being established in the country and a proposal of 19 centres has been approved so far.

53. 20th livestock Census to be conducted from 1st October in all districts of the country

The 20th Livestock Census will be conducted in all districts of the Indian Union in participation with all States and Union Territories. States/UTs have been requested to start the census operations from 1st October, 2018.

The Minister of Commerce & Industry, Suresh Prabhu, has approved the constitution of a High Level Advisory Group (HLAG) to make recommendations for identifying and pursuing opportunities and for addressing challenges in order to find a way forward in the contemporary global trade scenario.

56. Constitution of Group of Ministers (GoM)

During the 30th Meeting of the GST Council, the proposal of the State of Kerala for imposition of Cess on SGST for rehabilitation and flood affected works was discussed in detail.

The Kolkata Municipal Corporation, with the support of the Asian Development Bank, has launched the countryâ€™s first flood forecasting and early-warning system.

60. PM inaugurates Conference on Academic Leadership on Education for Resurgence

The Prime Minister Shri Narendra Modi inaugurated the Conference on Academic Leadership on Education for Resurgence in Vigyan Bhawan in which the Vice-Chancellors/Directors from more than 350 universities participated.

State-run telecom firm BSNL has inked a pact with Japan's Softbank and NTT Communications to roll out 5G and internet of things technology in India.

The Union Cabinet cleared a proposal to convert GST Network (GSTN), which provides IT infrastructure for the new indirect tax regime, into a 100 per cent government-owned company.

The Ministry of Housing and Urban Affairs, under the aegis of Swachh Bharat Mission â€“ Urban (SBM â€“ U), has partnered with Google to launch the Loo Review campaign to encourage all local guides in India to rate and review public toilets on Google Maps.

In order to fight the growing problem of counterfeit drugs in India, NITI Aayog and Oracle signed a Statement of Intent (SoI) to pilot a real drug supply-chain using blockchain distributed ledger and Internet of Things (IoT) software.

The RBI has barred the bank from opening new branches and put a freeze on the remuneration of Bandhan Bank MD and CEO Chandra Shekhar Ghosh.