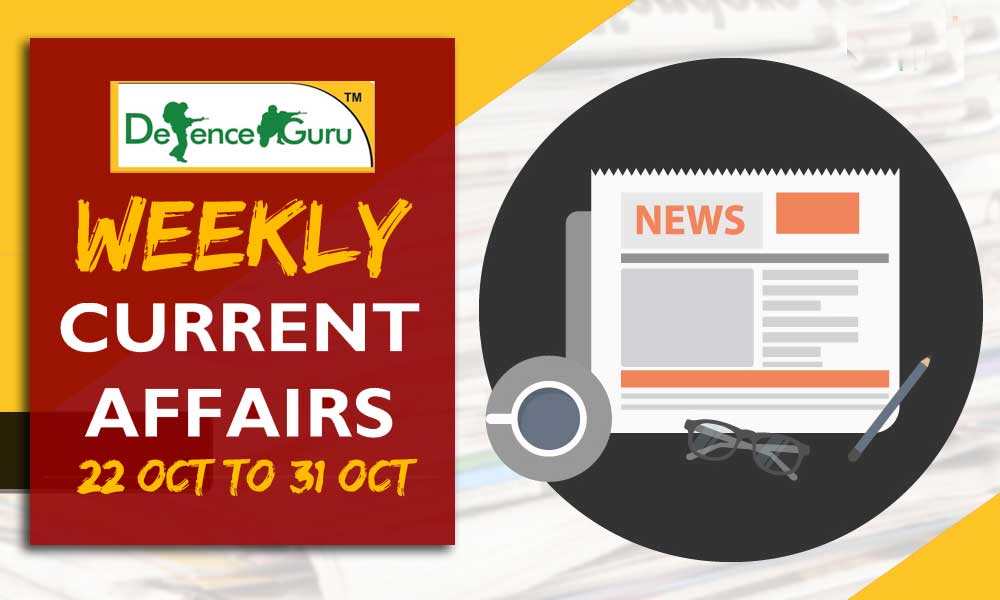 M Nageshwar Rao was appointed as interim Central Bureau of Investigation (CBI) director with immediate effect. Director Alok Verma and Special Director Rakesh Asthana were sent on leave. The development has come at a time when there is an internal war going on within the agency. Asthana, a 1984 batch Indian Police Service officer of Gujarat cadre, is accused of accepting a bribe of Rs 2 crore from a Hyderabad-based businessman Sathish Babu Sana.

2. GoM set up to strengthen safety laws for women at workplaces

The government has constituted a group of ministers (GoM) to strengthen the legal and institutional frameworks to prevent and deal with sexual harassment of women in workplaces. Headed by Union home Minister Rajnath Singh, the fourmember GoM will examine the existing provisions for dealing with sexual harassment of women in offices. The other members of the GoM are road transport and highways minister Nitin Gadkari, defence Minister Nirmala Sitharaman and women and child development minister Maneka Sanjay Gandhi.

Iraq's new Prime Minister Adel Abdul Mahdi was sworn in but could not announce the full cabinet after legislators failed to reach a consensus on key postings. Abdul Mahdi was initially expected to nominate a full 22-member cabinet, including the defence and interior ministers. Under Iraq's constitution, Shia, Sunnis, Kurds and other minorities must all be represented in cabinet.

The government appointed IRS officer Sanjay Kumar Mishra as the Interim Director of the Enforcement Directorate (ED) for three months as incumbent Karnal Singh will retire on October 28. The Appointments Committee of the Cabinet (ACC) also said that it has approved Mishra’s appointment to the post of Principal Special Director of the financial probe agency.

Michael D Higgins has been re-elected as Irish president after receiving 56% of the country's election vote. Businessman Peter Casey came second with 23.1%, while none of the other four candidates polled more than 10%.

Former Delhi chief minister Madan Lal Khurana passed away after a prolonged illness. He was 82. A veteran of the BJP, Khurana was the chief minister of Delhi from 1993 to 1996 and was appointed the governor of Rajasthan in 2004.

Invest India has received the top UN Investment Promotion Award in recognition of its efforts to boost investments in the renewable energy sector in India. The award was presented by Armenian President Armen Sarkissian to Deepak Bagla, the CEO of Invest India, in Geneva at the inaugurations of the World Investment Forum organised by the UN Convention on Trade and Development (UNCTAD).

Agricultural scientist M.S. Swaminathan will receive the first World Agriculture Prize instituted by the Indian Council of Food and Agriculture (ICFA) in New Delhi. The prize will be presented by Vice-President Venkaiah Naidu at Vigyan Bhawan at a special session. The prize has been instituted by the ICFA with an aim to recognise individuals who have served humanity through agriculture.

The Seoul Peace Prize Committee has decided to confer the 2018 Seoul Peace Prize on Prime Minister Shri Narendra Modi, in recognition of his dedication to improving international cooperation, raising global economic growth, accelerating the Human Development of the people of India by fostering economic growth in the world's fastest growing large economy and furthering the development of democracy through anti-corruption and social integration efforts.

The Tagore Award for Cultural Harmony for the years 2014, 2015 & 2016 is being conferred on the doyen of Manipuri dance Sh. Rajkumar Singhajit Singh; Chhayanaut (a cultural organization of Bangladesh) and on one of India’s greatest sculptors, Sh. Ram Vanji Sutar, respectively.

Novelist and short story writer Benyamin has won the inaugural JCB prize for Literature in India. Benyamin won 25 lakh rupees for his book Jasmine Days, translated from Malayalem by Shahnaz Habib. Jasmine Days is a story of a young woman in a city where the promise of revolution turns into destruction and division.

Roopam Sharma, a 23-year old Indian scientist, won the World Health Summit Startup award, 2018 for his invention, Manovue. It is the world’s first intelligent personal assisting system for the visually impaired. Sharma was awarded at an annual event of the health summit in Berlin recently.

Pakistan's iconic human rights activist and lawyer Asma Jahangir was posthumously awarded the 2018 UN Human Rights Prize. She was one of the four winners of the award which was announced by the United Nations. Other recipients are Tanzanian activist Rebeca Gyumi, Brazil's first indigenous lawyer Joenia Wapichana and Ireland's human rights organisation Front Line Defenders.

The Paraguayan Clara Sosa was crowned as the new Miss Grand International in the competition in the city of Yangon in Myanmar. Sosa, Miss Paraguay, reached the final together with Miss India, Meenakshi Chaudhary Kumar.

Army Sports Institute, Pune under the aegis of Services Sports Control Board is conducting the 3rd Elite Men’s Boxing National Championship with effect from 27 October to 02 November 2018.

Windies all-rounder Dwayne Bravo brought the curtains down on his 14-year international career by announcing his retirement from all formats of the game.

In Men’s Hockey, India and Pakistan were declared joint winners of the Asian Champions Trophy at Muscat in Oman.

Grandmaster B Adhiban finished tied third at the Isle of Man International tournament after beating highly-regarded Michael Adams of England in the ninth and final round in Isle of Man, United Kingdom.

Three Indian-Americans have been named in the Time magazine's 2018 list of the 50 most influential people whose work is transforming healthcare in the US.

The 22nd National Level Meeting between India and Myanmar was held from 25to 26 October, 2018.

International Animation Day is celebrated on October 28, commemorating the day in 1892 when Charles-Emile Reynaud’s Theatre Optique made its first public appearance in Paris.

25. Angela Merkel to step down as German chancellor in 2021

Germany's Angela Merkel has said she will step down as chancellor in 2021, following recent election setbacks.

27. Malala Yousafzai to be honoured by Harvard University for her work promoting girls' education

Nobel Prize Winner Malala Yousafzai will be honoured by Harvard University for her work promoting girls' education. Harvard's Kennedy School said Yousafzai will be conferred with the 2018 Gleitsman Award at a ceremony on 6th December.

President Donald Trump, he is preparing an executive order that would end the right to US citizenship for children born in the US to non-citizens.

The International Conference on Status and Protection of Coral Reefs (STAPCOR – 2018) with the theme “Reef for Life” was inaugurated by the Union Minister of Environment, Forest and Climate Change, Dr. Harsh Vardhan on 22nd October at Bangaram coral Island of Union Territory of Lakshadweep.

The Prime Minister, Shri Narendra Modi, will interact with IT and electronic manufacturing professionals across India on October 24, 2018, on the occasion of the launch of the “Main Nahin Hum” Portal and App.

33. Establishment of Appellate Tribunal under Prohibition of Benami Property Act, 1988

The Union Cabinet chaired by Prime Minister Shri Narendra Modi has approved the appointment of Adjudicating Authority and establishment of Appellate Tribunal under Prohibition of Benami Property Transactions Act(PBPT), 1988.

34. Cabinet approves setting up of Indian Institute of Skills in PPP modes

The Union Cabinet chaired by Prime Minister Shri Narendra Modi has approved the for setting up of Indian Institute of Skills(IISs) at different locations across the country in Public Private Partnership (PPP), which will be explored for promotion of IIS at select locations based on demand and available infrastructure.

The Cabinet Committee on Economic Affairs chaired by the Prime Minister Shri Narendra Modi has given its approval for creation of special Fisheries and Aquaculture Infrastructure Development Fund (FIDF).

The Vice President of India, Shri M. Venkaiah Naidu has said that value addition for agricultural production is one of the solutions for improving farmers' income.

The Global Agriculture Leadership Summit 2018 opened in New Delhi. The theme of the 2-day summit is, 'Connecting Farmers to Market'.

40. 24th edition of Technology Summit to begin at New Delhi

India will host the 24th edition of Technology Summit with Italy as the partner country.

The Minister of State for Communications (Independent Charge) Government of India, Mr Manoj Sinha and the H.E. Mr Andrus Ansip, European Commissioner for Digital Single Market and Vice President of the European Commission have met in New Delhi to discuss cooperation on Digital communications, Digital economy and society.

The Central Vigilance Commission (CVC) observes the Vigilance Awareness Week every year during the week in which the birthday of Sardar Vallabhbhai Patel (31st October) falls.

India Mobile Congress(IMC) 2018 – a marquee event which provided a peep into the exciting future in the rapidly evolving area of digital communications – ended, with participants and organisers promising to be back next year.

The Department of Consumer Affairs, Government of India along with National Consumer Disputes Redressal Commission (NCDRC) jointly organized a Conferenceat Vigyan Bhawan New Delhi to review the functioning of the State Commissions and District Fora.

The Ministry of Drinking Water and Sanitation (MDWS) organized a seminar in Wardha district of Maharashtra.

48. Kerala the best State for teenage girls in India: Report

Kerala tops the TAG index which compares the performance of each State based on the status of their teenage girls, as a part of the survey findings of The Teen Age Girls (TAG) Report, conducted by Project Nanhi Kali.

To make the younger generation more oriented towards scientific and technological innovations, the Indian Institute of Technology (IIT) Kharagpur organised a science and technology competition for students of class 8 to 10.

50. Maharashtra Coast to be Developed as Tourism hotspot: Suresh Prabhu

53. Gadkari to lay the foundation for India’s largest Dry Dock at Cochin Shipyard

The Financial Stability and Development Council, FSDC, held a meeting in New Delhi which was presided over by Finance Minister Arun Jaitley.

56. PM to dedicate Statue of Unity to the Nation

The Prime Minister, Shri Narendra Modi, will dedicate the world’s tallest statue, the “Statue of Unity”, to the Nation, at Kevadiya in Gujarat on October 31, 2018.

The overseeing committee (OC) that is being set up under the inter-creditor agreement (ICA) for resolution of stressed assets will have six members.

Capital Goods(CG) producers from across the globe inked 38 MoUs with Indian steel companies which will reduce imports for the steel sector worth Rs 39,400 crore.

61. India and UK collaborate on research on Ganga delta region and the Bay of Bengal

India and the United Kingdom will collaborate on research on different aspects of the Ganga delta region and the Bay of Bengal.

State Bank of India (SBI) and Hitachi Payment Services Pvt Ltd have signed a definitive agreement to enter into a joint venture for the establishment of a latest card acceptance and future ready digital payment platform for India.

The Arunachal Pradesh government signed a MoU with The British Council to strengthen educational and cultural cooperation.