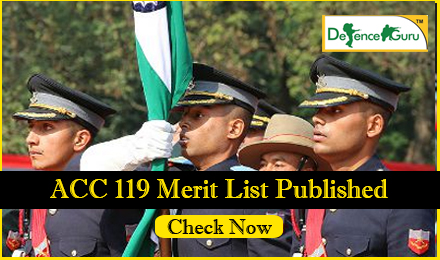 Indian Army has finalized the Army Cadet College ACC 119 Merit List for which the notification was published last year. There were a total 75 vacancies available for the ACC 119 Course out of which 37 serving personnel cleared out SSB Interview. You can check out the list mentioned below.

For those who don't know about Army Cadet College, here is a short description of the same. Army Cadet College is an institution which trains normal soldiers from all the different wings of Indian Defence including Indian Army, Indian Navy, Indian Air Force to serve as an Officer in the Indian Army. Joining ACC is a similar process which candidates go through from NDA and CDS. To join ACC, one must appear to the ACC Exam followed by SSB Interview. The ACC Exam Syllabus is very similar to that of CDS Syllabus but with some additional subjects. We will give a brief description of the ACC Exam in the next article. Till then check out the ACC 119 Merit List. Click here For Best ACC Coaching in Lucknow

UPSC has released the CAPF AC written result 2022 on its official website. Candidates who have qualified for Physical Standards Test/ Physical Efficiency Tests[...]

NEET (UG) 2022 results are released, aspirants will be able to download their scorecards from official website. Read article - How to Check NEET UG Result 2022[...]