An Appraisal Of Indian Judiciary 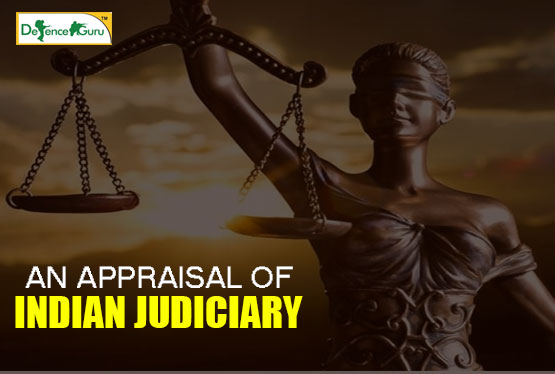 At the peak of Indian democratic pillars lies the Judiciary system. When going for SSB interview, the age- old, monumental topic of Indian Judiciary is most frequently put up.

Law and rules are the 2 ultimatum of Indian Judiciary. The aim behind this set- up is welfare of the citizens. Opening the dictionary of Judiciary, one would find a pile of courts, laws, rights, principles, and judges. Bringing to you a nano insight into all of the above elements, here is a superlative article on Indian Judiciary for SSB interview:

SUPREME COURT: Can you guess it by the name? Oh yes, Supreme Court is the highest, the end- most place of appeal. Whichever law, rule or statement is passed by Supreme Court it becomes final and rest all have to abide by it. It constitutes a panel of 30 Judges along with other proficient judges for advisory purpose. The court resolves appeals, writ petitions and cases requiring immediate decision.

HIGH COURT: Counted 25 in number, High Courts are set up in each state or union territory to monitor legal issues. It functions to resolve economic issues and legal documentation. There is a panel of 94 judges split up into 71 permanent and 23 additional judges.

DISTRICT COURTS: Controlled by High courts, the various district courts run at a secondary level in each State. It manages Civil and criminal issues. Add to that the body of district courts is lengthy as it includes family, civil, criminal and other courts.  They are formed as per the population of the State.

LOK ADALAT: One of the subordinate courts under the District courts, Lok Adalat resolves issues amicably between two parties. It can be formulated either by High court legal service, district legal service or taluk legal service.

Huh! By now you surely know that shouldering a lot of responsibilities, Indian Judiciary is the core element of our nation’s constitution. It casts a spell of protection which no one else can! Hence, not only is it mandatory from SSB point of view but also a moral obligation to have a know- how of the topic. Just enjoy the topic and read it in a rhythm!