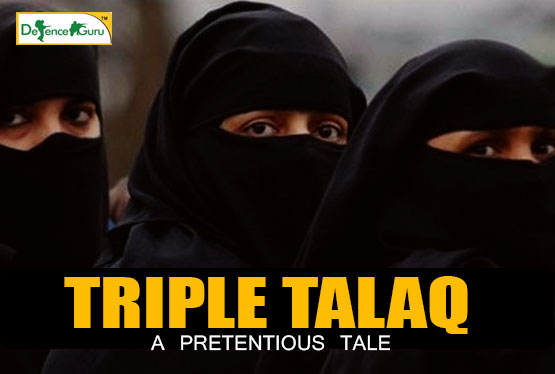 ‘Talaq talaq talaq’ and the marriage get nullified. Tell me, is it so simple to end the pious relation of marriage, to terminate an oath taken in front of the Almighty as a witness?

Not only unfortunate but the wakeful reality is unjust when it comes to women slot of India. Initiated in 2017, the issue of triple talaq is hovering in every mind and holds a great chance to be asked in your SSB interview. Compiling in a nutshell all necessary details I bring to you this fulfilling article on the essentialities of triple talaq:

In simple words, triple talaq is the Islamic method of giving divorce. However the scene is quite topsy turvy. Holding a common misconception that pronouncing ‘talaq’ thrice in one go will annul the marriage, is the miserable tale of Islamic divorce in India.  On a side note, as per the scriptures there is no such thing as ‘instant’ talaq. A time period of three months is ordained wherein both the husband and wife maintain their distance and ponder upon their relation. Only after the completion of 3 month the divorce gets completed.

There is a certain panel of people, which may include close family, friends, relative or religious advocates who have a stronghold in the decision of divorce. This condition is applied to safe wife and husband from making any immature or impulsive decision.

Lastly, the husband has to give a certain sum of money or any other asset to the wife as per his capacity. More so, if the wife decides to forego this taking the husband need not give anything.

The truth exposed, it’s time to dive into the emergence of recent laws and development done in the case of triple talaq. With the onset of year 2017 the issue of triple talaq came into limelight. It all started with the heartbreaking story of Shayara Bano. Married to Rizwan Ahmed for 15 years, Shayara got the shock of her life when Ahmed blurted out ‘talaq talaq talaq’ and ended the marriage.

Undaunted and brave Shayara filed a petition in the Supreme Court regarding the violation of triple talaq, polygamy and nikah halala.

As just as it may sound, the bill unfortunately got stuck up in Rajya Sabha due to opposition party.

Despite the passing of bill in favor of women, there are still many despondent cases of unjust, unlawful instant triple talaq bursting in the country. Here is a compact list of the same:

Well well well that’s a lot of information to retain, isn’t it? But seeing from a different perspective this is the complete dictionary of triple talaq. You need not run your fingers surfing net for this topic anymore. Just scan the above points with open eyes and an open mind and the word ‘failure’ will be out of your life!