A Detailed Note On The Medical Standards Of INET Exam 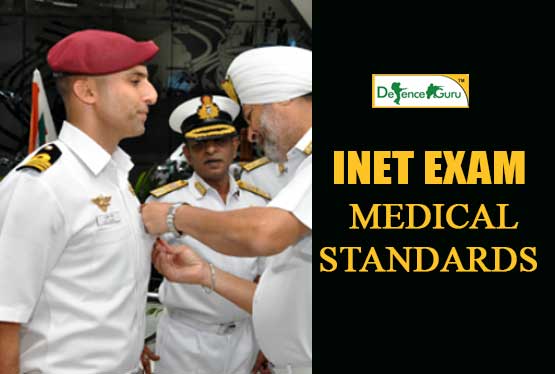 Indian Navy, officially established after independence, that is, 1950 is the beauty queen of Indian Armed Forces. It has a an integral role in national security as it focuses on  safeguarding the nation's maritime borders; combat and defeat any threats or aggression against the territory, people or maritime interests of India, both in war and peace. Add to that, Indian Navy promotes bilateral relations between nations through goodwill visits and humanitarian missions, including disaster relief.

Indian Navy Eligibility Test (INET) is an online exam conducted for admission of Direct Entry Officers after graduation. The candidates are further screened for Permanent Commission or Short Service Commission.

INET stands equal to the level of Indian Air Force exam. Until now the applicants were screened on basis of merit after graduation and then called for SSB while from now on, that is, with the introduction of INET, only those candidates who qualify the entrance exam shall be called for SSB.

After every 6 months Indian Navy shall publish its advertisement for the registration and schedule of Officers through INET exam. The procedure of INET follows the following steps:

Written exam which will be in online mode and includes English, Reasoning and Numerical Ability, General Science and Mathematical Aptitude, and General Knowledge.

The selected candidates will find their names in the final merit list and will have to go for Basic Training at the Indian Naval Academy.

Since INET is introduced newly many applicants are unaware of its details. Hence I endeavor to specifically spill the medical standards for INET in this handy article.

There is no relaxation in the medical parameters for INET candidates. The same standards as that of Officer entry are applied here. Candidates of Pilot entry, however have to undergo PABT (Pilot Aptitude Battery Test) along with Aviation medical exam. The details are as follows:

There is provision of relaxation in height for certain candidates except those applying for Aviation. Below are its details:

Furthermore, the visual standards for the Officers are as follows:

Permanent body tattoos are permitted on the following body parts only, for which a candidate will be required to sign a Self Certification Certificate:-

(a) Inner face of forearms i.e. from inside of the elbow to the wrist of both the hands.

Now that you have the detailed medical standards of INET do check your measurements before applying for the exam. Indian Navy is a progressive and lavish career choice so if you fit in the medical standards then don’t step back. Give your best to get fruitful result.