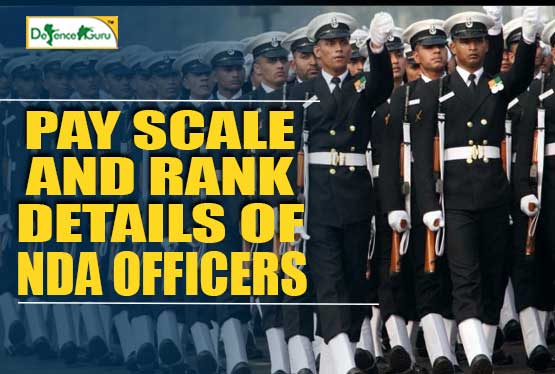 Great institutions bring in great benefits! NDA is one such place to gain bountiful rewards.

National Defence Academy (NDA) is not only the priority of Defence aspirants but is also a package of immense benefits. It is the first tri- service academy in the world to render training to cadets of Indian Air Force, Indian Army and Indian Navy. The campus of NDA is widespread in the vicinity of Khadakwasla, Pune.

NDA offers a three year residential undergraduate course for which the degree is awarded at Jawaharlal Nehru University (JNU) along with high quality training in respect to military background, that is, behavioral, personality, physical and mental skill development sandwiched with perfect disciplinary attitude.

That was about the standard and training imparted at NDA. The rewards that I mentioned earlier relates to pay scale and rank of NDA Officers. Here is a highlight on the same notion:

Note- There will be a fixed MSP (military service pay) amount of INR 15,500/- Per month to be paid to the Officers of the rank of Lieutenant to Brigadier.

-Life is uncertain and one cannot guarantee when and how much money he might need. Hence NDA also offers some amount for contingency and accident. The seriousness of the consequences will directly affect the compensation amount. They include:

Compensations in Case of Disablement

Furthermore there are some added benefits which the NDA Officers receive. These include:

Candidates will be liable for insurance of INR 15 Lacs/- after paying a one-time payment of INR 6400/- for 3 years.

The Insurance will provide a cover of INR 7.5 lacs to the candidates who are invalidated out from NDA by IMB as disabled candidates. Also, if they are not entitled to any pension and the disability is 100%.

In the case of 20% of the disability, the insurance coverage amount will be reduced to INR 1.5 Lacs.

Candidates are eligible for after service benefits like Pension, Gratuity, and Casualty pensionary award as per the rules applicable after their retirement.

Well, well isn’t that an overwhelming offer. Not just salary but also the rank structure of NDA Officers is worth noticing. Below are its details:

With this a complete encyclopedic information about NDA rank and pay structure has been listed above. Impressive is the only word I could think of for the above advantages of joining NDA. Read the above, prepare your best and get ready to avail splendid offers once you get to NDA