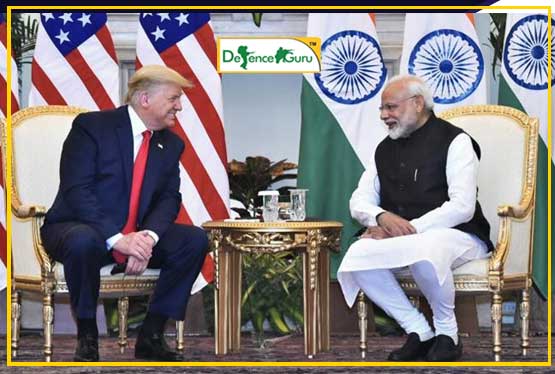 A much-awaited global diplomatic event between the world's two biggest democracies leaders 45th President of the United States Donald Trump’s and 14th Prime Minister of India Narendra Modi was held in India on February 24 and 25. This was Donald Trump’s first state visit to India accompanied by his wife Melania, daughter Ivanka and son-in-law Jared Kushner and a high-level delegation.

US President Donald Trump two-day India visit has been high on optics and covered extensively by national and international media, jamming the social media platforms like twitter, facebook, instagram with bit by bit details of Trump-Modi reunion.  Hours before landing in India, Trump was quite excited about his visit which was reflected in his Hindi tweet before arrival viz.:

On 24th February Donald Trump and his wife Melania landed at Sardar Vallabhbhai Patel International Airport in Ahmedabad, Gujarat at 12 PM. PM Modi had received Trump at the Airport and in his home state Gujarat thousands of people lined the streets of Ahmedabad city in Gujarat to greet the guest. President Trump accorded with the Guard of Honour along with the cultural reception on arrival in the presence of PM Modi and all high-level dignitaries of India.

Day 1 on 24th February was scheduled with Trump visit to Sabarmati Ashram in Ahmedabad, grand roadshow on the streets of Ahmedabad leading to Motera Stadium grand event and visit to Taj Mahal, Agra.

US President Donald Trump and Prime Minister Narendra Modi began their 22-km-long roadshow on Monday from the Ahmedabad International Airport.

Trumps had spent three-and-a-half hours in the heritage city at Sabarmati Ashram and the Namaste Trump event at Motera Stadium.

Taj Mahal Visit
Donald Trump became the third president to visit the architectural icon. Agra was visited by Trump family only where he was not accompanied by PM Modi. Welcomed at the airport by UP CM Yogi Adityanath and Governor Anandiben Patel, Trump visit to Agra was for 2 hours after their visit to Ahmedabad and before 2nd Day visit to Delhi.

Trump wrote in the visitors book before signing it that “The Taj Mahal inspires awe, a timeless testament to the rich and diverse beauty of Indian Culture!' Thank You, India”.

The key highlights of Bilateral meeting:

Witnessing several occasions to Trump visit in India an enduring glimpse of Melania Trump was also encountered during her tour of the Delhi government school where she witnessed activities as part of the ‘Happiness Curriculum’.

President Ram Nath Kovind in honor of US President Donald Trump hosted a banquet dinner at the Rashtrapati Bhavan in Delhi on February 25 with its forecourt decked up to its glory for the last engagement of his two-day visit to India. Trump was received by President Ram Nath Kovind and his wife Savita at the Rashtrapati Bhavan. The architectural marvel, spread over 130-hectares, was lit up for Trump and his wife Melania.

The last engagement of Trump two-day visit to India on Tuesday night before his India departure lasted with Trump statement “It was very special two days. I love India, I respect Indians. We will be back, we will be back".

This article has revision questionnaire on current affairs for you to practice for your exams. Check Weekly Current Affairs & Static Gk 13 June to 19 June 2022[...]

This article has revision questionnaire on current affairs for you to practice for your exams. Check Weekly Current Affairs & Static Gk 6 June to 12 June 2022.[...]

Defence Guru provide Weekly Current Affairs 30 May to 5 June 2022, aims to help every competitive exam aspirant to revise the day at ease. This week, we have[...]