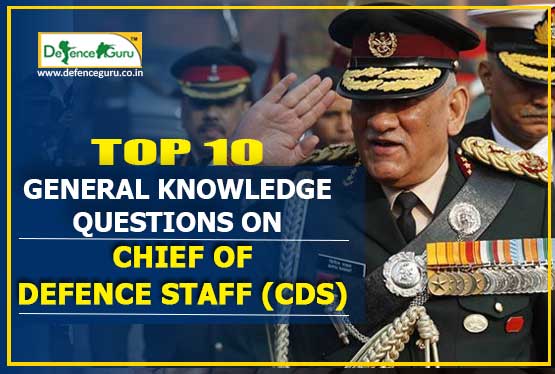 The Latest and Revised Top 10 GK Questions and Answers on Chief of Defence Staff (CDS) Rank relating to its uniform and insignia (Badges, Belt Buckle, Peak Cap and Buttons) in defence are assembled in this article. While you are going to face upcoming defence exam or SSB Interview strong current affair knowledge improves your chances in beating the bottle neck competition, topic covered in this article will make you aware on the latest development in defence.

Targeting the upcoming defence exam then you might be aware on the latest happenings and its detail here we provide you the basic information in question format that would help you in practice and revision sessions. Therefore, now all the candidates can check them. And can even recite them to memorize.

Question 1: Who is the first Chief of Defence Staff?

Answer 2: Appointments Committee of the Cabinet

Question 3: Where is the office of CDS located?

Answer 3: Chief of the Defence Staff (CDS) office is in South Block.

Question 4: What is the tenure of CDS?

Answer 4: Three years or until the age of 65; whichever is earlier

Answer 5: The colour of the uniform remains olive green with the gold-wreathed tri-service emblem of the Indian Armed Forces (the Naval anchor, crossed Army swords and Air Force eagle, all surmounted by the Indian national emblem) is used in place of service insignia and unit emblems.

Question 6: What is there in shoulder batch of CDS uniform?

Question 7: What is there in Rank stars?

Answer 7: The tri-service emblem is substituted for the rank stars

Question 8: What is there in cap badges, button and belt badge?

Question 9: What is the flag on vehicle

Answer 9: The car flag on the CDS’s official vehicle will bear the national flag and also symbolise the three services.

Answer 10: The principal military adviser to the defence minister on all matters relating to tri-services. A key mandate of the CDS will be to facilitate restructuring of military commands for optimal utilisation of resources by bringing about jointness in operations, including through establishment of joint/theatre commands.

General Bipin Rawat took over as the first CDS on 1st January 2020. He will serve a full three-year term till December 2022.

As the Permanent Chairman of Chiefs of Staff Committee, CDS General Bipin Rawat will perform the following functions:

The CDS's salary and perquisites will be same as the service chiefs. The CDS will come under the Right To Information Act.

The role and function about the first Chief of Army Staff is significantly drafted in this article along with the Latest and Revised Top 10 General Knowledge Questions And Answers on Chief of Defence Staff (CDS) Rank.