Why did the Chinese Army withdraw from the Galwan valley 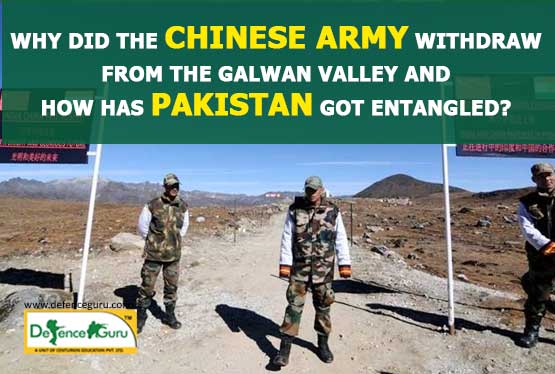 Why did the Chinese army withdraw from the Galwan valley and how has Pakistan got entangled?

The withdrawal of the Chinese army from Galwan Valley raises a lot of questions, a move that is being discussed all around the world. So far, China has withdrawn its army 1 KM and behind this some important reasons are coming out.

The first and foremost reason is India's hard preparations that have left China in a panic, in view of the war scenario India at LAC has deployed Indian Army, Air Force or Navy as well as on Galwan Valley. The recent PM visit at Galwan Valley added a strong message that is not limited only to the Indian Army, Indian residents but to the whole world in which China also comes.

International unity of nations is an important reason behind Chinese army withdraw from the Galwan valley. Now if we see the third reason, this is the geographical reason - the summer temperature has increased due to which the snow of the Galwan Valley has melted, the water level has gone up due to which the Chinese Army is not staying that long.

The other issue that laid focus is building pressure on Pakistan Prime Minister Imran Khan because China has given so much debt to Pakistan financially that now it has sunk into debt due to China's borrowing. Pakistan will now have to think what should be its next step, if it stands with China, it is still in danger and if it does not cooperate, then too it stands in danger.

The full impact of all the issues is visible on India, along with the way India is getting international support with Pakistan and China, it is boosting India's morale.