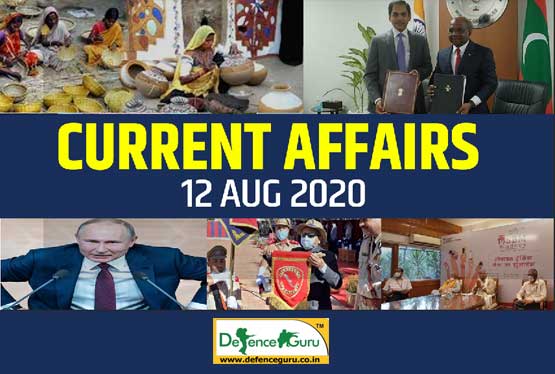 • President Vladimir Putin announced the approval of the vaccine candidate less than two months of human testing amid skepticism from scientists.

• Russia has already received requests from over 20 countries for 1 billion doses of the new COVID vaccine. International scientists have however questioned whether Russia by moving to roll out the vaccine speedily is putting national prestige before solid science and safet

• The Union Tribal Affairs Ministry is developing nine “Tribal Freedom Fighters’ Museums dedicated to the contributions of the tribal people in India to the freedom struggle.
• Out of the nine museums, two museums are almost nearing completion and the remaining seven are at different stages of progress.
• All museums are expected to come into existence by the end of 2022. Prime Minister NarendraModi had announced setting up of these tribal freedom fighters’ museums during his Independence Day Speech on August 15, 2016.
• All the museums will have strong usage of technologies like virtual reality, augmented reality and 3D/7D holographic projections. The museums will demonstrate the way tribals struggle to protect their custodial concerns for the biological and cultural diversity of the country.

• India and Maldives signed a contract on August 10, 2020 for development of five eco-tourism zones in Addu atoll of the island nation.
• The eco-tourism zones are part of grant projects being implemented under the High-Impact Community Development project (HICDP) scheme that involves total grant assistance of USD 5.5 million to the Maldives.
• Currently, nine such high-impact projects being implemented in the Maldives. The key objectives of the projects include developing high-impact assets, building capacities within the local councils and supporting the local island economy.
• These projects are expected to bring about a transformation in the economic and employment landscape of Addu

In a significant development in the history of Ladakh Police, Ladakh Lieutenant Governor RK Mathur has unveiled the Flag, Formation Sign and Epaulettes of the newly formed police force, today. Formation of separate Ladakh Police notification came on 23rd May this year. AIR Correspondent reports that at a ceremonial function by Ladakh police after unveiling the Ladakh Police Flag and Insignia, MrMathur said that Ladakh Police soon would take up the recruitment process and completing the promotions as well.
Mr. Mathur appealed the police to work with the public in professional and friendly manner, to improve the public opinion about the police. LG Mathur also suggested the Ladakh Police to observe the formation day on 31st of October every year symbolically coincide with the formation of UT Ladakh. In the inaugural speech, Ladakh Inspector General of Police, SS Khandare listed various measures in the pipeline for Ladakh Police. He assured the Police will adopt citizen centric approach.

He launched SBM Academy by dialling the designated IVR toll-free number. Speaking on the occasion, MrShekhawat said, the IVR based free mobile online learning course on ODF Plus will be crucial in achieving goals underlined in Phase - 2 of Swachh Bharat Mission (Gramin).