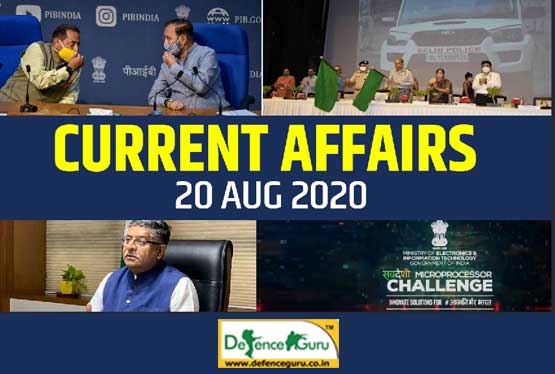 Union Cabinet gave its approval to set up the 'National Recruitment Agency' for conducting the Common Eligibility Test for all the recruitment agencies such as UGC, RRB,CBSE, SSC and others. The move is expected to boost transparency in the entire recruitment process and will be beneficial for the youth looking out for jobs.

i.On 18th August, 2020 a Memorandum of Understanding (MoU) was signed between All India Institute of Ayurveda (AIIA) and Delhi Police for extending ayurvedic mode of preventive and promotive health services in the residential colonies of the Delhi Police through mobile units named ‘DhanwantariRath’.

ii.The service ‘DhanwantariRath’ and Police Wellness Centres will be catered by AIIA, supported by the Ministry of Ayurveda, Yoga & Naturopathy, Unani, Siddha and Homoeopathy (AYUSH).

ii.Swadeshi Microprocessor Challenge is a part of the series of Effective, advanced and standardized measures taken by the ministry of Electronics and IT to enhance the technology guided innovative ecosystem in India and to stay on top of digital adoption.

About Ministry of Electronics & Information Technology(MeitY):

1.(a) USD 1 billion
Asian Development Bank (ADB) has approved a loan of $1 billion to support the construction of the high-speed, modern Delhi-Meerut Regional Rapid Transit System. The officials of NCR Transport Corporation, entity executing the project, confirmed the news on August 18, 2020.

2.(a) Reliance Retail
Reliance Retail has acquired a majority equity stake in 'Netmeds' for approximately Rs 620 crores. The announcement was made by the Reliance Industries Limited (RIL) through a statement on August 18, 2020.

4.(d) Mali
Mali President Ibrahim Boubacar Keita announced his resignation and dissolved the Parliament on August 19, 2020 after he was reportedly detained at gunpoint by mutinying soldiers.

6.Which Indian Sports Authority will be providing immediate support to 61 athletes who are not employed due to the COVID-19 pandemic?
a)BCCI
b)Hockey India
c)Badminton Federation
d)Football Federation

6.(b) Hockey India
The Hockey India executive board has announced immediate support for 61 athletes who are not employed due to the ongoing COVID-19 pandemic. The athletes include both junior and senior male and female athletes.

7.(d) Bangladesh
India’s Foreign Secretary Harsh VardhanShringla said during the concluding day of the two-day visit to Bangladesh that the country will get priority in the COVID-19 vaccine produced by India. He stated that India is in an advanced stage of COVID-19 trial and it is going to produce vaccines at a massive level.

8.(c) Ladakh
India is planning to build a new road from Manali to Leh to facilitate troop movement to Ladakh without observation from the enemy. The new road will provide the third link between the high altitude Union Territory and the rest of the country.