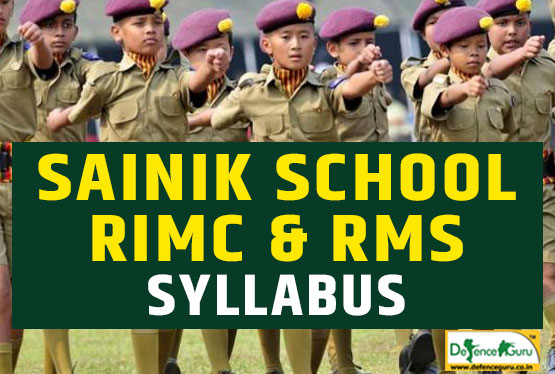 Minutely monitoring each activities of the highly professional academic institutions, the full coverage is strategically drafted in this article. Considering the updated and important guidelines & syllabus of Sainik School, RIMC & RMS admissions, the categorical syllabus has been set here to the best of understanding of children and parents/guardians.

Mensuration: (Conversion of Units of Area and Volume, Perimeter and areas and of triangle – rectangle – square including given diagrams, circumference and area of circle, volumes of solids such as cube and cuboid, etc.)

Structure of Government, Fundamental rights and duties, united nation and its functions.

Main aim of the school is to prepare the cadets academically, physically and mentally for entry into the commissioned ranks of the Defence Services through the National Defence Academy.

Class VI of U.P. Board / Central Board of Secondary Education/ Council for Indian School Certificate Examination for admission to Class VII respectively

Class VIII of U.P. Board / Central Board of Secondary Education/ Council for Indian School Certificate Examination for admission to Class IX respectively

The Questions will set on 8th class Standard from NCERT Syllabus

The purpose of this institution was to provide Indian boys with suitable education and training to ensure a high pass-rate for the Indians being sent to the Royal Military College, Sandhurst, as part of the Indianisation program of the officer cadre of the Indian Army.

The complete overview of All India Sainik School, Up Sainik School, RIMC, RMS has been listed in this article. Students before appearing for the entrance exam are required to go through the Syllabus and Exam pattern thoroughly.

Apply in September for Sainik School batch launched with 45 seats

To get detailed information on Sainik School Notifications, Syllabus, Tips and Tricks, Admit

Be an Efficient Learner! Save Time and Effort! Get Centurion Defence Academy Student App. Download the App Now