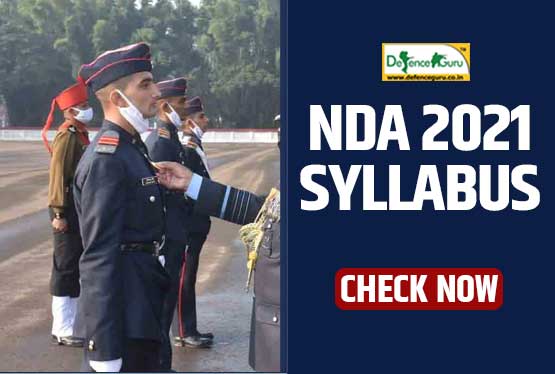 Union Public Service Commission (UPSC) has released the notification of the entrance examination for students seeking admission in National Defence Academy (NDA) and Naval Academy (NA) – I. One can apply for this competitive examination latest by January 19th, 2021 till 6.00 pm. The examination will be held on April 18th, 2021. In order to emerge as a successful candidate, the first step constitutes in knowing the syllabus of the examination well. If one understands the requirement of this prestigious examination-with respect to proper understanding of the syllabus-well, he can come up with an effective examination preparation strategy. Then, with the help of a disciplined and focused approach one can expect a good all India rank in the competition. Broadly stating, the scheme of the examination comprises of a written examination and Services Selection Board (SSB) test/interview. By means of the written examination a candidate’s knowledge with regard to ‘mathematics’ and ‘general ability test,’ as subjects of study, is assessed.

Candidates should possess sound knowledge of mathematics, at 10+2 level. Those who have not studied this subject at senior secondary school stage can gain a good understanding of the same by purchasing an excellent book, namely Mathematics for NDA/NA/Air Force/Navy (Technical), a publication of Centurion Defence Academy (CDA) from Amazon. Next, the paper on general ability test assesses candidates’ knowledge of English and General Awareness. With regard to English studies, candidates can purchase a useful text, namely English for NDA/CDS (Handbook cum Workbook), again a publication of Centurion Defence Academy (CDA) from Amazon. The part of General Awareness contains objective type questions on Physics, Chemistry, Chemistry, General Science, Social Studies, Geography and Current Events. The entire syllabus is discussed in detail, further.

The students can avail of the benefit of online/offline NDA classes of CDA-a reputed name in the domain of defence services examinations preparation-starting from January 11th, 2021. For the same,

Types of matrices, operations on matrices. Determinant of a matrix, basic properties of determinants. Adjoint and inverse of a square matrix, Applications-Solution of a system of linear equations in two or three unknowns by Cramer’s rule and by Matrix Method.

Angles and their measures in degrees and in radians. Trigonometrical ratios. Trigonometric identities Sum and difference formulae. Multiple and Sub-multiple angles. Inverse trigonometric functions. Applications-Height and distance, properties of triangles.

The question paper on General Knowledge will broadly cover the subjects : Physics, Chemistry, General Science, Social Studies, Geography and Current Events. - The syllabus given below is designed to indicate the scope of these subjects included in this paper. The topics mentioned are not to be regarded as exhaustive and questions on topics of similar nature not specifically mentioned in the syllabus may also be asked. Candidate’s answers are expected to show their knowledge and intelligent understanding of the subject.

Physical Properties and States of Matter, Mass, Weight, Volume, Density and Specific Gravity, Principle of Archimedes, Pressure Barometer. Motion of objects, Velocity and Acceleration, Newton’s Laws of Motion, Force and Momentum, Parallelogram of Forces, Stability and Equilibrium of bodies, Gravitation, elementary ideas of work, Power and Energy. Effects of Heat, Measurement of Temperature and Heat, change of State and Latent Heat, Modes of transference of Heat. Sound waves and their properties, Simple musical instruments. Rectilinear propagation of Light, Reflection and refraction. Spherical mirrors and Lenses, Human Eye. Natural and Artificial Magnets, Properties of a Magnet, Earth as a Magnet.

Difference between the living and non-living. Basis of Life—Cells, Protoplasms and Tissues. Growth and Reproduction in Plants and Animals. Elementary knowledge of Human Body and its important organs. Common Epidemics, their causes and prevention. Food—Source of Energy for man. Constituents of food, Balanced Diet. The Solar System—Meteors and Comets, Eclipses. Achievements of Eminent Scientists.

The Earth, its shape and size. Lattitudes and Longitudes, Concept of time. International Date Line. Movements of Earth and their effects. Origin of Earth. Rocks and their classification; Weathering—Mechanical and Chemical, Earthquakes and Volcanoes. Ocean Currents and Tides Atmosphere and its composition; Temperature and Atmospheric Pressure, Planetary Winds, Cyclones and Anti-cyclones; Humidity; Condensation and Precipitation; Types of Climate, Major Natural regions of the World. Regional Geography of India—Climate, Natural vegetation. Mineral and Power resources; location and distribution of agricultural and Industrial activities. Important Sea ports and main sea, land and air routes of India. Main items of Imports and Exports of India.

Knowledge of Important events that have happened in India in the recent years. Current important world events. Prominent personalities—both Indian and International including those connected with cultural activities and sports.

NOTE : Out of maximum marks assigned to part ‘B’ of this paper,