Why MNS is best career opportunity after 12th 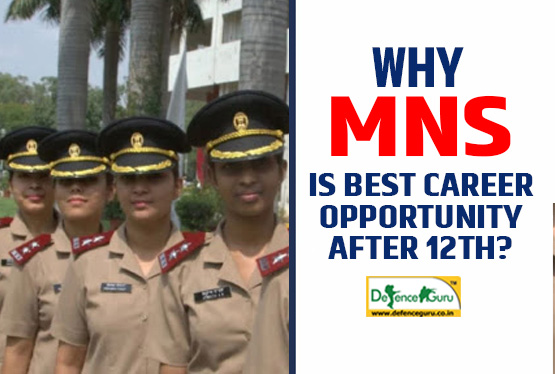 In the words of Donna Cardill “Nurses are the heart of healthcare”.

The most prestigious and powerful job for all young girls after Class 12 is Military Nursing Service. Women who are strong, gentle, humble, compassionate, disciplined can foster even stronger, fierce, educated, passionate, and rational to bring laurels in their country. The MNS constituted as an all women, all officer Corps of the Indian Army. The women officers in the MNS treated as an integral part of the Armed Forces Medical Services (AFMS).

Aspirants who are aspiring to be a MNS Officer should know all the benefits in MNS career. For an excellent success and progress we have complete faith that you will be immensely motivated to know why MNS is best career opportunity after Class 12th.

Only female candidates can apply for Military Nursing Service, the highly skilled specialized Nursing Officers career in armed forces is truly admirable for each young, vigilant and vivacious woman.

If females have successfully qualified intermediate exam with Physics, Chemistry, Biology (Botany & Zoology) and English and aspiring to join Indian Armed Forces then the best career ahead after 10+2 is MNS.

With not less than 50% aggregate marks in PCB stream other than NEET examination the female candidate also have MNS as a better career opportunity.

Secured the post of Additional Director General in Military Nursing Service, the young female aspirants after class 12 can seek a job with higher pride and recognition in Indian Armed Forces.

Joining Military Nursing Service not only offers career of nursing but also grant the position of Nursing Officer in Indian Military Services.

Yes after joining Military Nursing Service after class 12th, the female candidates get an opportunity to ‘SERVE THE NATION & SERVE THE MANKIND’.

The officers should be careful in adhering to the long traditions of the Army. The dress and deportment of the officers in the MNS shall be conforming to the same as applicable for other women officers of the regular Army.

After class 12th female aspirants get into the world of competition where several competitive exams line up. Female who opted biology in class 12 apply for doctors and nursing examinations at various levels.

NEET exam for admissions in medical colleges are often considered as only option after class 12 for bio students but with MNS exam girls are benefited to enroll into Indian Army Military Nursing Service Course BSc. (Nursing) for four years. If you are Biology students after class 12 you can apply for MNS exam that has syllabus completely based on class 11 and 12.

The selection procedure of MNS exam is simple and defined where MNS exam subjects include- Physics, Chemistry, Biology, GK, GS.

Best for female candidates with Handsome Pay and Allowances

Aspiring to join MNS then you will be benefited with handsome pay and allowances of Indian Armed Forces. There is an equal opportunity for growth and development in Military Nursing Services which will give you position equal to other high ranked officers in Indian armed forces

Females candidates selected for grant of SSC (Short Service Commission) in the MNS will be liable to serve for five years extendable to a total tenure of fourteen (5+5+4) years, anywhere in India in the same way as Military Nursing Service (Regular) Officers of the Armed Forces (Army, Navy and Air Force).

SSC Officers of the MNS will be considered for grant of permanent commission as per existing rules as amended from time to time. They will be subjected to interview by a Selection Board duly constituted for the same. However, the grant of Permanent Commission will be subject to availability of vacancies in the Cadre.

From the position of Lieutenant, Captain, Major, the growth of female aspirants in Military Nursing Service are good. The mark of dignity, recognition and opportunity are great in Indian Armed Forces. You could join a career which offers wide scale of development and honor to young female aspirants.

You as a Commissioned Officer derive authority directly from the President of India and, as such, hold a commission charging you with the duties and responsibilities of Nursing Care in armed forces medical facilities.

Military Nursing Services render yeoman service to the country at all times. The highly skilled specialized Nursing Officers career in armed forces is truly admirable for each young, vigilant and vivacious woman.

If you are looking for the Best MNS Coaching in India, then you are at right place.

NEET answer sheet 2022 has been attached in the below section of this post which candidates can download in PDF as well. the NEET 2022 answer key & Cutoff Marks[...]

NTA successfully conducted the NEET (UG) Exam 2022 on 17th June at various exam centers. If you are looking for the NEET question paper 2022, then this article[...]