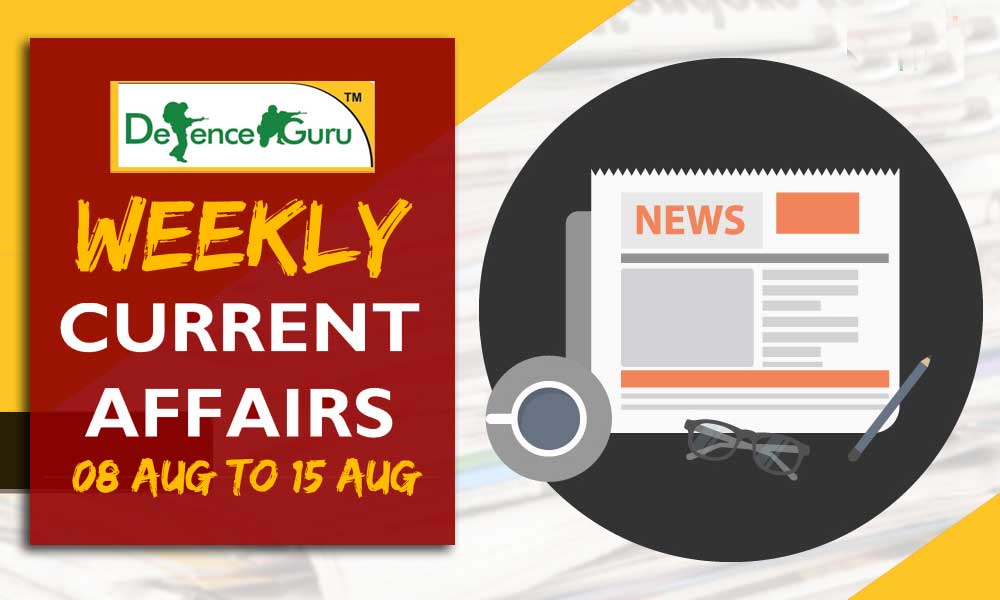 Dear Student, Here Defence Guru given the list of Important Weekly Current Affairs 2nd Week of August 2018. Candidates those who are preparing for NDA, CDS, SSB and other competitive exams can make use of it.

The government has appointed Chartered Accountant Swaminathan Gurumurthy, who is associated with the Rashtriya Swayamsevak Sangh affiliate Swadeshi Jagran Manch, on the board of the Reserve Bank of India.

NDA candidate and JD(U) leader Harivansh Narayan Singh was elected as the Deputy Chairman of the Rajya Sabha.

NCW member Rekha Sharma, who recently stoked a controversy by suggesting abolition of confessions in churches, has been appointed as the chairperson of the National Commission for Women.

The Appointments Committee of the Cabinet has extended the term of Telecom Regulatory Authority (TRAI) Chairman R.S. Sharma till September 2020.

The Government of India has appointed Dr. R. G Anand as Member, National Commission for Protection of Child Rights with effect from 13th July 2018.

Justice Mukesh R Shah was t sworn in as the Chief Justice of Patna High Court in Patna.

10. Anandiben Patel given additional charge as governor of Chhattisgarh

DMK chief Karunanidhi passed away at the age of 94 after battling a prolonged illness at the Kauvery hospital.

12. Anant Bajaj of Bajaj Electricals passes away at 41

Anant Bajaj, business magnate and the only son of Bajaj Electricals Chairman Shekhar Bajaj passed away.

13. Nobel Laurate VS Naipaul passes away

Nobel Laureate writer VS Naipaul has passed away on August 11 at the age of 85.

Former Lok Sabha Speaker and veteran communist leader Somnath Chatterjee passed away at the age of eighty-nine in Kolkata.

Chhattisgarh Governor Balram Das Tandon passed away after suffering a heart attack in Dr B R Ambedkar Memorial Hospital in Raipur. He was 90.

The Vice President of India, Shri M. Venkaiah Naidu has said that continuous communication between public representatives and the public is crucial for development of our nation.

Javelin thrower star Neeraj Chopra will be Indiaâ€™s flag bearer in the opening ceremony of the upcoming Asian Games 2018.

Barcelona defender Gerard Pique has confirmed that he is stepping down from international football following a disappointing World Cup for Spain.

Rafael Nadal held off a late surge from Stefanos Tsitsipas to claim the 80th title of his career with victory at the Toronto Masters.

51st ASEAN Foreign Ministersâ€™ Meeting was held in Singapore. Singapore was the rotating president of the meeting.

US space agency Nasa has launched its mission to send a satellite closer to the Sun than any before.

International Youth Day (IYD) is an awareness day designated by the United Nations and celebrated every year on 12 August.

25. Vienna ranked as most liveable city in the world

The Austrian capital, Vienna, has beaten Australia's Melbourne to be named the world's most liveable city.

The Government of Australia has decided to recommence the Adoption Programme with India, as per Hague Convention on Inter-Country Adoption.

Policy initiatives of TRAI, over the years, have been to protect the interests of the consumers. Recognizing the importance of reaching out to the consumers and to safeguard their interests, TRAI has now integrated its Mobile Apps namely DND 2.0 & MyCall with UMANG Platform.

With a view to exploring the roles and contributions of the business sector in the implementation of SDGs in India, NITI Aayog, United Nations in India and the Confederation of Indian Industries (CII) are jointly organizing a Government and Business Partnership Conclave on 8th August 2018 at Pravasi Bharatiya Kendra, Chanakyapuri, New Delhi.

Objectives of the Conclave are as follows:

Bihar Chief Minister Nitish Kumar has launched an ambitious scheme which promises to provide Rs 54,100 from the birth of a girl child till she graduates.

31. Suresh Prabhu to inaugurate rubber meet on Aug 30 at Kochi

Suresh Prabhu, Union Minister of Commerce and Industry, will inaugurate the fourth edition of the India Rubber Meet (IRM 2018) in Kochi on August 30.

The Prime Minister, Shri Narendra Modi, will attend an event to mark World Biofuel Day, at Vigyan Bhawan in New Delhi on August 10, 2018.

The Union Cabinet chaired by the Prime Minister Shri Narendra Modi was apprised of joint issue of Postage Stamps on India-South Africa on the theme, "20 Years of Strategic Partnership between India and South Africa".

NITI Aayog will host an Investorsâ€™ Conference on August 10, 2018 at Pravasi Bharatiya Kendra for the Holistic Development of Islands.

The Minister of State for Culture (Independent Charge) and Minister of State for Environment Forest and Climate Change, Dr. Mahesh Sharma inaugurated an exhibition entitled â€˜Prathibandhit Sahitya mein Swatantrata Sangramâ€™ (Freedom Movement through Proscribed Literature) in the premises of National Archives of India, in New Delhi.

Operation â€œMadadâ€ has been launched by the Southern Naval Command (SNC) at Kochi since 09 Aug 2018 for assisting the state administration and undertaking disaster relief operations due to the unprecedented flooding experienced in many parts of Kerala, owing to incessant rainfall and release of excess water from Idukki and other dams.

44. MoHFW and Ministry of Tribal Affairs sign an MoU

A Memorandum of Understanding (MoU) has been signed between Ministry of Health & Family Welfare (MoHFW) and Ministry of Tribal Affairs (MoTA), Government of India for cooperation between the two Ministries for sensitizing the principals and training to teachers each of all functional EMRSs, Ashram Schools and other Schools supported by MoTA in the country using the existing infrastructure of MoTA in the states.

In a bid to encourage more Indian travellers to visit Israel, the Middle East nation has opened a Visa Application Centre in Kolkata that would cater to West Bengal and seven northeastern states.

46. Centre sets up GoM headed by Suresh Prabhu to decide on RCEP talks

The government has set up a four-member group of ministers (GoM) headed by trade minister Suresh Prabhu to advise prime minister Narendra Modi on whether to continue with or withdraw from the 16-member Regional Comprehensive Economic Partnership (RCEP) negotiations.

The Union Minister of State (Independent Charge) for Development of North Eastern Region (DoNER), MoS PMO, Personnel, Atomic Energy and Space, Dr Jitendra Singh disclosed that Jammu will be the first city in North India to get a full-fledged Space Technology Research Centre, devoted to research, academics and post-graduation study.

Bengaluru does not figure even in the top 25 Indian cities in the Ease of Living Index, which rates Pune as the best city to live in.

Santhali has become the first Indian tribal language to get a Wikipedia edition in its own script after the Santhali Wikipedia went live earlier this month.

In pursuit of achieving greater heights in the field of mountaineering, Indian Army is planning to attempt Mt Makalu (8485M), the fifth highest mountain peak in the world in 2019.

The third report of Third Party Audit-cum-Survey of ranking of cleanliness covers 407 stations which includes 75 station in A1 and 332 station in A category stations. The top scorers are as under:

53. â€˜North East Circuit: Imphal & Khongjomâ€™ in Manipur will be inaugurated

Dr. Najma A. Heptulla, Honâ€™ble Governor of Manipur will be inaugurating the project â€œDevelopment of North East Circuit: Imphal & Khongjomâ€ implemented under the Swadesh Darshan Scheme of Ministry of Tourism, Government of India.

NITI Aayog has launched â€œPitch to MOVEâ€ - a mobility pitch competition that aims to provide budding entrepreneurs of India a unique opportunity to pitch their business ideas to a distinguished jury.

57. Nearby technologies to start bill payments through BBPS with Yes Bank

Bajaj Allianz General Insurance has entered into a bancassurance deal with Vijaya Bank.

Global technology platform and digital payments leader, PayPal, and HDFC Bank, the largest credit card issuer in India, have entered into a partnership.

Private sector HDFC Bankâ€™s Deputy Managing Director Paresh Sukthankar has resigned amid speculation that he may be joining as the chief of another lender.

66. Amazon inks MoU with UP govt to boost MSME entrepreneurs

E-commerce major Amazon India has signed an MoU with the Uttar Pradesh government to support MSME entrepreneurs across nine districts as a part of the state's One District One Product (ODOP) scheme.

Nearly three months after Allahabad Bank divested its MD & CEO Usha Ananthasubramanian from all functional responsibilities, the government has dismissed her from service.