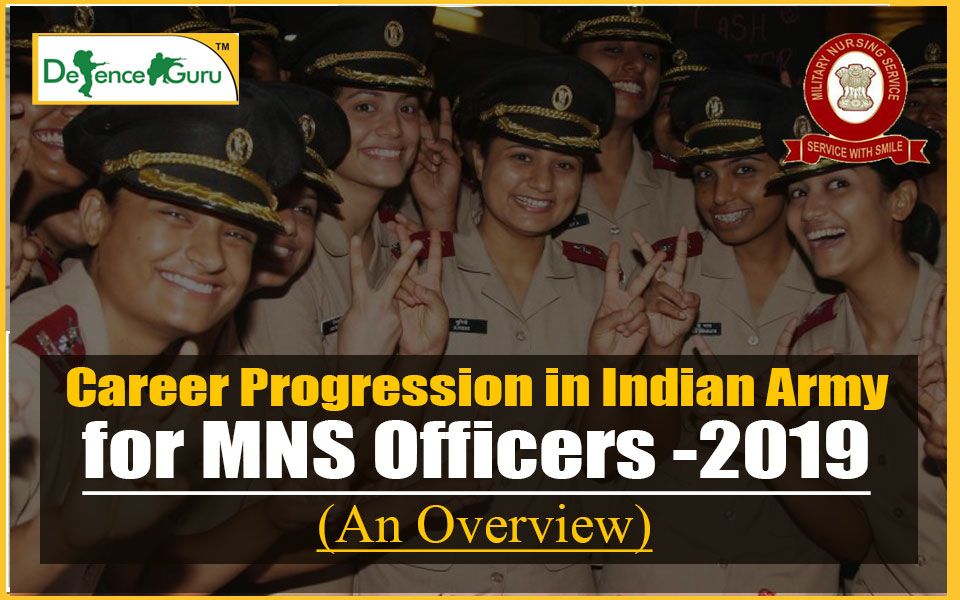 Career Progression in Indian Army for MNS officers-2019 | An overview

Since our past days, we are facing career progression hurdles for young lady candidates in indian armed forces. A serious analysis about the career progression of young lady candidates reveals their aspiration restricted and their potential is deprived due to limited scope after 12th for joining them into prestigious indian military services. It becomes patetic for them who nurtures dream to wear olivegreen since their childhood. Recently in 3rd week in may 2019, MNS has caught the attention of high level authorities including chiefs of Indian armed forces and ministry of defence. After 12th class female candidate may join Indian armed forces through single entry that is known as military nursing services. However, MNS entry is only for biology stream female students of 12th standard. MNS officers perform duties in Militry hospitals / station medicare centres of indian armed forces and serving in close control with medical officers in all medical related operations.
Since induction of military nursing services into Indian armed forces in 1943, members of MNS have not achieved status as compared to Brother and Sister officers (Commissioned officers) serving into indian armed forces enjoying par status. Due to the court case filed by major general Usha sikdar (retd), 28 welfare and job satisfaction related issues were raised. Now due to court's discretion, authories are looking forward to enhance the quality and job satisfaction for MNS officers. They are into agreement to promote MNS officers up the senior ranks (Brigadier and above with star plate on their service vehicles) and also to offer them ESM (ex-serviceman) status which will enable their career more secured while getting discharge from Indian armed forces.
After the revolutionary reforms in tanure of existing government to promote women empowerment this initiative seems good news for female defence aspirants those who are seeking career into Indian armed forces as an officer having Biology stream in 12th.

Syllabus for MNS as per 2019 exam schedule is as follows

Mns exam in india is conducted once in a year in the month of feb tentatively. Indian armed forces is facing serious shortage of MNS officers. Presently 5300 MNS officers are serving in india. Mode of examination is offline. Students can join best mns coaching for true guidance for written and interview.

we will go through some of the best MNS books to prepare comprehensively for the upcoming MNS exam. Considering the high level of competition for the MNS exam, [...]