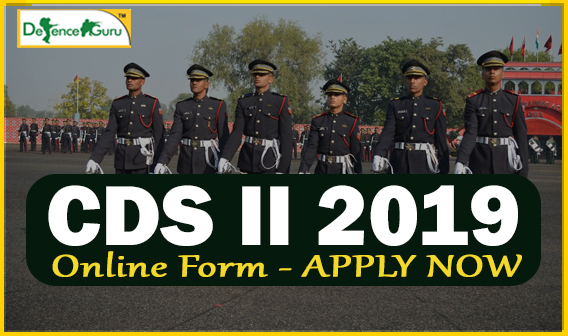 Candidates are required to apply online by using the website http://upsconline.nic.in Brief instructions for filling up the online Application Form have been given in the Appendix-II (A). Detailed instructions are available on the above mentioned website.

ELIGIBILITY:Â
Nationality: A candidate must be unmarried and must either be a Citizen of India.

FEE : Candidates (excepting Female/SC/ST candidates who are exempted from payment of fee) are required to pay a fee of Rs. 200/- (Rupees Two Hundred Only) either by depositing the money in any Branch of SBI by cash, or by using net banking facility of State Bank of India or by using Visa/Master/Rupay Credit/Debit Card.

STANDARD AND SYLLABUS OF THE CDS EXAMINATION

STANDARD
The standard of the papers in Elementary Mathematics will be of Matriculation level. The standard of papers in other subjects will approximately be such as may be expected of a graduate of an Indian University.

ENGLISH: The question paper will be designed to test the candidatesâ€™ understanding of English and workmanlike use of words.
GENERAL KNOWLEDGE: General Knowledge including knowledge of current events and of such matters of everyday observation and experience in their scientific aspects as may be expected of an educated person who has not made a special study of any scientific subject. The paper will also include questions on History of India and Geography of a nature which candidate should be able to answer without special study.
ELEMENTARY MATHEMATICS:
ARITHMETIC : Number Systemâ€”Natural numbers, Integers, Rational and Real numbers. Fundamental operations, addition, substraction, multiplication, division, Square roots, Decimal fractions. Unitary method, time and distance, time and work, percentages, applications to simple and compound interest, profit and loss, ratio and proportion, variation. Elementary Number Theoryâ€”Division algorithm. Prime and composite numbers. Tests of divisibility by 2, 3, 4, 5, 9 and 11. Multiples and factors. Factorisation Theorem. H.C.F. and L.C.M. Euclidean algorithm. Logarithms to base 10, laws of logarithms, use of logarithmic tables.

GEOMETRY: Lines and angles, Plane and plane figures, Theorems on (i) Properties of angles at a point, (ii) Parallel lines, (iii) Sides and angles of a triangle, (iv) Congruency of triangles, (v) Similar triangles, (vi) Concurrence of medians and altitudes, (vii) Properties of angles, sides and diagonals of a parallelogram, rectangle and square, (viii) Circles and its properties including tangents and normals, (ix) Loci.

UPSC has released the CAPF AC written result 2022 on its official website. Candidates who have qualified for Physical Standards Test/ Physical Efficiency Tests[...]

NEET (UG) 2022 results are released, aspirants will be able to download their scorecards from official website. Read article - How to Check NEET UG Result 2022[...]