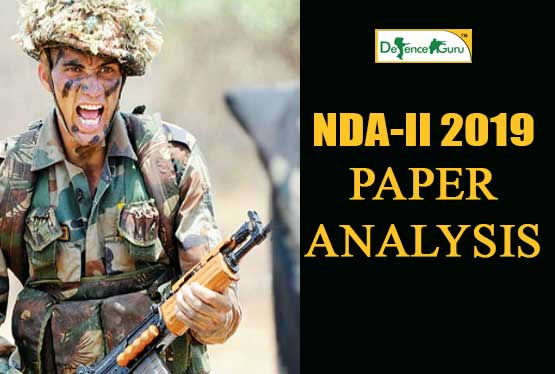 NDA- National Defence Academy! Just as the name holds a lot of weightage so does its exam. Each year NDA conducts entrance exam to train the candidates into best cadets for Indian Army, Indian Navy, and Indian Air Force.

The applicants were seen chattering and discussing about the questions in all corners of the nation. Although there is enough time in declaration of result, but answer keys, expected off and a brief analysis could reduce the tension of the students so here is an overview of the 2019 NDA paper:

STUDENTS REVIEW:  On questioning the students it was revealed that the overall difficulty level was moderate to difficult.

Analysis- Maximum questions were asked from Arithmetic, Matrix, Sequence and Series, Differentiation, Trigonometry. The level of paper was moderate but time-consuming. From question 1 to 40 especially the difficulty level was high.

The GAT paper comprises of 150 questions from English, Geography, History, Physics, Chemistry, General Science and Current Affairs. Total marks allotted for this paper is 600. This year division and level of topics is penned down as follows:

To make things more clear here is the topic-wise distribution of questions of GAT along with its analysis.

Topic-wise distribution of questions for English

Analysis: The English section of NDA 2019 had comparatively easier questions than last year. The candidates who had better preparation of grammatical rules and vocabulary hold higher chances of more marks. Furthermore, the antonyms & synonyms were easier than vocabulary. All in all the English paper seems quite scoring.

Analysis- Well students often confuse this paper for being analytical while the truth is the General Knowledge section of GAT in NDA is factual and requires mugging up. So with an upper hand on clarity of concepts the candidate would have easily solved it this year. Talking individually, the History section was bit difficult with questions ranging from world history to modern Indian history. The questions in General sciences had a Moderate to difficult level as questions in Biology section were easy, average in Chemistry and slightly difficult in Physics Lastly, Current affairs Questions ranged from moderate to difficult level. Those who regularly keep up with news and events would not have faced any problem. In a nutshell the paper level was moderate.

Nothing could be said for sure but considering the level of exam, its pattern and question experts have predicted the cut off for this year is to be from 330 to 348.

No matter what and how deep we analyze the paper only you know the truth of your performance. How much you studied, how well you solved the questions will mark your result. But remember no matter what the result is, life goes and the world has abundance of opportunities so keep up your good hopes!

To help NDA aspirants find the right NDA Coaching Institute for their NDA preparation, we have come up with the Best five NDA coaching institutes in Lucknow.[...]