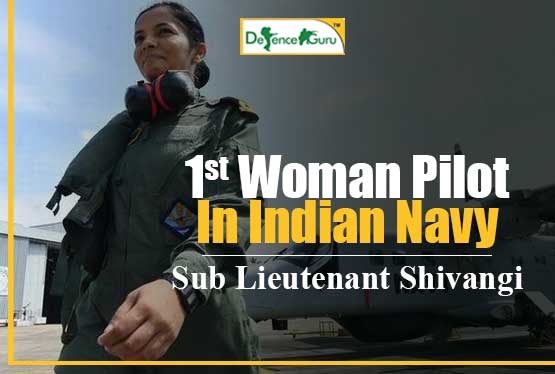 Women power, women empowerment, women elevation. What are these notions without any proof, without any positive outcome? We talk much about strengthening women section of our society but pay little emphasis on their achievements.

It is time to appreciate nationally the efforts and accomplishments of our ladies. To name the most recent one would be Lieutenant Shivangi.

Lieutenat Shivangi, who hails from Muzzafarpur, Bihar is the first woman pilot to join Indian Naval Operations. Shivangi completed her schooling from DAV Public School and later went to Sikkim Manipal University. She was inducted into Indian Navy as SSC (Pilot) as part of 27 NOC course in Indian Naval Academy, Ezhimala and got formally commissioned by Vice Admiral AK Chawla, in June last year.

It is after six months of rigorous training in the Naval Academy that she started her flying training on Pilatus (PC7) aircraft at Air Force Academy (AFA), Dundigal. After the completion of ab-initio training in AFA, she completed 07 Dornier Conversion Course from Dornier Training Squadron INAS 550 in Kochi.

Shivangi will join the Naval Operations on December 2, 2019 after completion of her training in Kochi followed by her authorization to fly Dornier Aircrafts.

Although coming from an ordinary background, Shivangi’s undeviated focus and ambitious spirit has brought her this success. Not only Shivangi but also Indian Navy has got a proud moment which will be registered in the pages of history.  It’s time to acknowledge Lieutenant Shivangi.