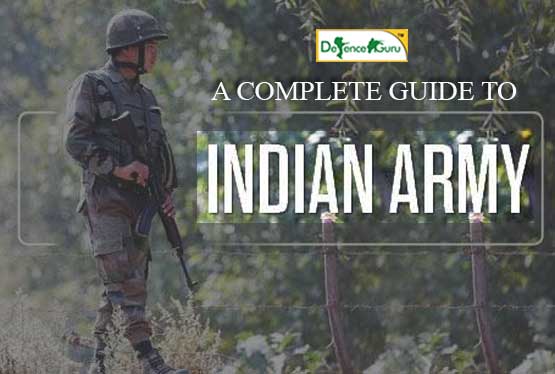 Army, in simple words is valor+ nobility. Quite a mathematical equation isn’t it? But certainly a true one!

Amongst renowned Armies of the world, Indian Army is one of the most disciplined, highly skilled and well trained army. Its guiding principle lies in the passion and dedication of the soldiers and Officers. Giving a tribute to this appreciated unit of India, here is an article that lays down all the necessary details of Indian Army.

Indian Army is the largest wing of Indian Armed Forces. The President of India is the Supreme Commander of the Indian Army, and it is commanded by the Chief of Army Staff (COAS). The current COAS is General Bipin Rawat.

The central mission of the Indian Army is to guarantee national security and national unity, defend the nation from external aggression and internal threats, and maintain peace and security within its borders along with conducting humanitarian rescue operations during natural calamities or any other disturbances. Indian Army earned fame with its brilliant performance in some crucial wars such as Kargil war, Bangladesh war, war of India- Pakistan 1965 and Siachen conflict.

Jumping onto the internal structure of Indian Army here are its necessary details:

Indian Army is the fourth largest army in the world and is divided into 7 commandments:

Currently, in this command 12 divisions and 4 cores are working.

Currently no unit of this command is working and it is assigned to South Western Command.

At present, 7 divisions, 3 cores and 1 brigade of this command are working.

South-Western Command (Headquarter - Jaipur)
At present, 7 divisions, 2 cores and 3 brigade of this command are working.

Currently 9 divisions, 3 cores and 6 brigades of this command are working.

This Command is the nodal agency for all institutional training in the army.

Indian Army has a widespread, well established rank structure which adds more honor to it and below is its complete information:

The Field Marshal rank is the highest rank in the Indian Army. It is a ceremonial or wartime rank.

Insignia – National emblem over a five-pointed star, both over a crossed baton and saber

Apart from the honorary rank of Field Marshal, this is the highest rank held by an Army officer. It is only the Chief of Army Staff (COAS) who holds this rank.

Lieutenant generals are appointed only by selection (after 36 years of commissioned service) and may hold the position of a Vice Chief of Army Staff or Army Commanders.

Major Generals are promoted by selection (after 32 years of commissioned service).

Brigadiers are promoted by selection (after 25 years of commissioned service)

Insignia – One gold star with stripe

There are various corps or to say headquarters (not to confuse with field headquarters) formed to handle an all-arms field army of three to five divisions or their equivalents. Here is a list of the same:

There is a list of corps with their respective headquarters.

Add to the above, there are also certain administrative corps of Indian Army which are as follows-

Impressing isn’t it? Most certainly the internal structure of Indian Army is perfectly sorted and you can also be a part of this dignified stream by joining through one of the following process:

Talking of female entry into Indian Army there are a handful of options that provide great opportunity to be a part of Indian Army. Here is a list of those options:

The complete inside- out of Indian Army has been drafted above. If you are proud of this honorary field and want to serve your motherland then start preparing for Indian Army now and check its official website.

If you are a female defence aspirant, you must know the weight and height requirements of females in the Indian Army.[...]

Indian Army uses a range of Arms and Equipment for conducting its operations. List some Arms and equipment used by Indian Army are following as[...]