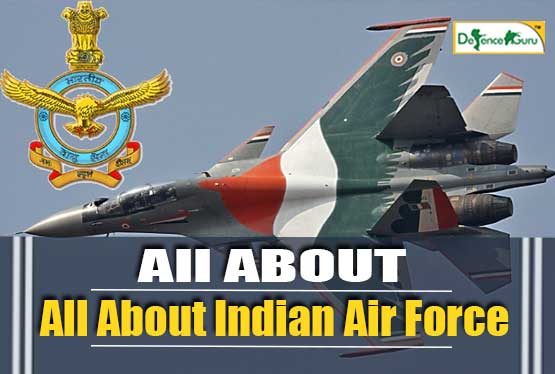 AN INSIGHT INTO THE DETAILS OF INDIAN AIR FORCE

If sky is the limit then joining Air Force takes you beyond the limit!

Amongst many such prestigious Air Force of the world, Indian Air Force holds a lot of honor and prestige. It will take you on a roller coaster ride, an adventure which will give you a life time experience.

Indian Air Force is a branch of Indian Armed Forces and ranks 4th best among world Air Forces. The President of India is the Commander while Chief of Air Staff (COA) manages working of all Operational Commands. The current COA is Marshal Rakesh Kumar Bhadauria.

The central motive of IAF is to secure Indian airspace and conduct aerial warfare. It has an inspiring motto which goes something like: “touch the sky with glory”.

Being a complete, separate field, Indian Air Force possess a lot of intricacies such as:

Structure, here, refers to the organizational set- up of Indian Air Force wherein the management, powers and responsibilities are shared by various people of authorities. To begin with, President of India is the Commander- in Chief of Indian Air Force followed by:

Chief of the Air Staff

Vice Chief of the Air Staff

Air Officer in charge of Administration

Air Officer in charge of personnel

Air Officer in charge of maintenance

Director General of Works and Ceremonial

Ranks, herein, refer to the order of positions as based on the system of Royal Air Force. The highest rank is that of Marshal of Indian Air Force followed by:

As can be seen above, ranks are not mere numbers but they are positions of repute and pride for the Officers.

Don’t go literary, Command does not relate to instruction here but various headquarters and campuses of Indian Air Force spread across India.

HOW TO JOIN Indian Air Force

India has grown to a massive body and so has its count of IAF applicants. There is a big crowd of citizens who dream, aim and work hard to be a part of Indian Air Force. The positions and opportunities lying down for the aspirants of Indian Air Force include:

You can join the Indian Air Force as an Officer in the Flying, Technical or the Ground Duty branches as per his/her educational qualification. The various sub- divisions of these branches are:

Flying Branch: Fighter pilots, Transport pilots, Helicopter pilots - You can get into the flying branch as a graduate [through CDS exam (men), through AFCAT exam (men & women), through NCC special entry (men). You can also get in after 10+2 by qualifying the NDA exam.

(b) Technical Branch: Mechanical, Electronics - You can get into this branch through the exam, AFCAT or through University Entry Scheme (UES.)

(c) Ground Duty Branch: Administration, Accounts, Logistics, Education, Meteorology -You can get into this branch by qualifying AFCAT.

The Air Force Group X 2021 sample papers PDF is given below access the PDF and start practicing paper i.e. based on the exact paper pattern for upcoming exam.[...]