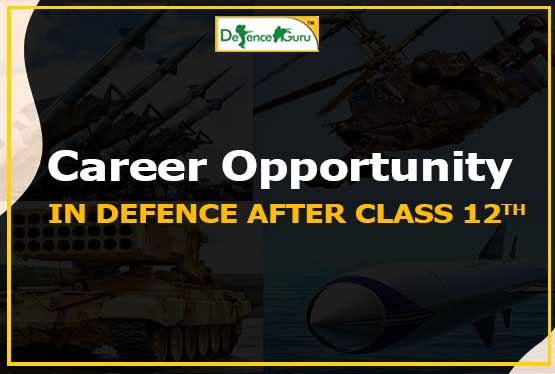 Class 12th exams are about to get over but you are still juggling with the career decision; you are in a critical mess. It usually appears as a sense of relaxation to some children who begin early thinking but as a burden for those students who resume into last minute discussion, planning and choices.

Surprisingly these days more and more children are opting for white collar jobs where power and money matters a lot but still we have a great young lot of students who are choosing defence as a career, a positive and welcome sign in today’s time where one wants to serve the nation and safeguard boundaries of the country. Hence, by being defence personnel one can find true respect and honor in the most dignified manner.

Knowingly and unknowingly class 12th students sit in different Entrance Exams after class 12th. Several defence entrance exams are also available and to be a part of these elite forces and to get an opportunity to serve the country, lakhs of candidates appear for different defence exams every year. Joining the defence forces brings a lot of responsibilities not only to you but also to the entire nation for whom we are fighting day and night.

People most of the time say “Big” things come in “Small” packages, an absolute true statement and we can use this saying in our defence as well where we observe the same thing. Your paychecks may be little, your allowances and benefits are modest, and you may spend a small amount of time with your families….but believe me, it takes a brave person with a “Big” heart to voluntarily put his/her life on the betterment of the Indian people daily. Many of them have had to sacrifice their lives just so the rest of us can live in a free and prosperous society.

Boys and girls finishing plus two examination can opt for career in Air Force, Navy and Army in technical and non-technical categories. Students can now opt for engineering career in the Army or Navy through Technical Entry Scheme, which enables him to become an engineer at Army expenses before getting commissioned as an officer. Various options are available in defencefor class 12th students ranging from 16 to 19 years age groups.

List of exams for qualifying entrance exams after class 12th to begin career in defence are:

Candidates short-listed after the initial selection procedure go through a rigorous training regimen at training establishments of these courses. Thereafter, they are commissioned as officers and various other posts at any of the Army, Naval, and Air Force Stations. Few inspiring and most respected female legends in Indian Defence Forces whose tales will make your chests swell with pride are:

The freedom and liberty we enjoy is much because of the brave men and women of the Indian Defence Forces who dedicate their lives to protecting the nation. The youth of our nation should come forward by choosing career in Defence after class 12th as it not only adds medals and stars in their career but also serve our nation, our home, our people.