Know All About Special Forces of India 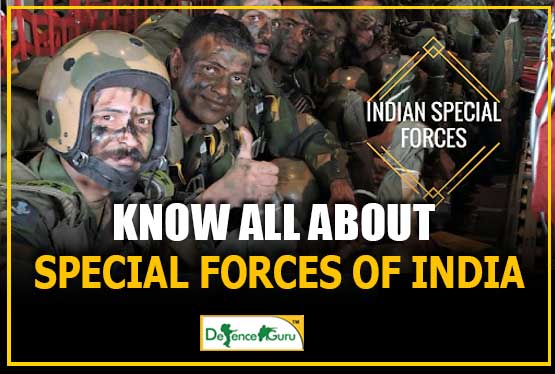 In your deadliest hour comes the warrior who does not limit themselves to only weapon and one way to respond to a threat but become one of the world’s lethal warriors. Entering the death-dealing circumstances the special forces of India exceeds all standards and defy all conventions. We can call them an Ironman, Hercules, Superman landed on the Indian board to safeguard a country under intense, high-risk elevated operations.

Special Forces of India are specifically organized, trained, and are equipped to conduct and support special operations in extreme conditions by land, water and air. The three branches of the Indian Armed Forces have separate special forces units, namely the Para SF of Indian Army, MARCOS of Indian Navy and the Garud Commando Force of Indian Air Force. However, small groups from these units are deputed in the Armed Forces Special Operations Division, which has a unified command and control structure. The Research and Analysis Wing, the external Intelligence Agency of India, has its separate special forces unit called Special Group.

- Unconventional warfare and many more

Detailed view on top rank Indian Special Forces that rank amongst the best in the world.

-   Raised in February 1987,  MARCOS officially called the Marine Commando Force (MCF) is the special forces unit of the Indian Navy.

- Capable of operating in all types of environments at sea, through air and on land.

- MARCOS are reputedly called the ‘Dadhiwala Fauj’ (The Bearded Army) by militants in Kashmir, owing to their bearded disguise.

-  Some MARCOS units are a part of the tri-services Armed Forces Special Operations Division. - The MARCOS are trained in every kind of weapon and instruments, from knives and crossbows to sniper rifles, handguns, assault rifles, submachine guns and bare hands.

- Established in September 2004 the Garud Commando Force is the special forces unit of the Indian Air Force.

- Has a current strength of over 1500 personnel.

- The unit derives its name from Garuda, a divine bird-like creature in Hinduism.

- Presently, Garuds are deployed in Congo as part of the UN Peace Keeping Operations.

- The Responsibilities of the Garud Base protection force are protect airfields and key assets in hostile environments, some advanced Garud units are trained like Army Para Commandos and the Naval MARCOS to undertake missions deep behind enemy lines.

- Currently numbering ten battalions, CoBRA is ranked among one of India's most experienced and successful law enforcement units.

- Ghatak Platoon or Ghatak Commandos, is a reconnaissance platoon that is present in every infantry battalion in the Indian Army.

- Ghatak is a Hindi word meaning "killer" or "lethal" act as shock troops and spearheads assaults ahead of the battalion.

- They can be tasked by the battalion or brigade commander to carry out tasks such as special reconnaissance, raids on enemy artillery positions, airfields, supply dumps and tactical headquarters.

- They are also capable of directing artillery and air attacks on targets deep within enemy lines.

- Established in 1981 the Special Group (SG) is the special forces unit of India's foreign intelligence agency, Research and Analysis Wing, and is tasked to undertake covert operations. - - The unit is confidential in nature, most of the information about its activities is highly classified.

- The SG is primarily based at Chakrata in the state of Uttarakhand and Sarsawa in Uttar Pradesh, where it is headquartered.

- All of its personnel are from the Indian Army, mostly from the Para (Special Forces).

- A paramilitary special force of India put under the direct supervision of the IB, and later, the Research and Analysis Wing, India's external Intelligence Agency.

- Its main goal originally was to conduct covert operations behind Chinese lines in the event of another Sino-Indian War.

- SFF has been fielded by R&AW and the Indian government in various covert and overt operation theatres.

- Raised in 15 October 1984 the National Security Guard (NSG) is an elite counter-terrorism unit under the Indian Ministry of Home Affairs (MHA).

- NSG was established following Operation Blue Star, Akshardham Temple attack and the assassination of Indira Gandhi, for combating terrorist activities with a view to protect states against internal disturbances".

- National Security Guard personnel are sometimes referred to as 'The Black Cats'.

- The NSG is a 'Federal Contingency Deployment Force' to tackle all facets of terrorism in the country.

- As a specialized counter-terrorism force, it is intended to be used "only in exceptional situations" and is not meant to take over the "functions of the State Police Forces or other Para Military Forces".

- Established in 1988 by an act of the Parliament of India

- The Indian Special Protection Group (SPG) is a special force for providing proximate security to the Prime Minister of India and members of their immediate families wherever in the world they are.

- Earlier, it used to provide security to former prime ministers as well but now Z+ security cover has been given to them.

The unheard warriors who enter these elite forces strike fear into our nation’s adversaries and perform the most demanding & dangerous missions with deadly expertise. Capable of reaching objectives by land, water and air they cross behind enemy lines undetected, hunt down terrorists thereby their lives exceed all standards and defy all conventions.