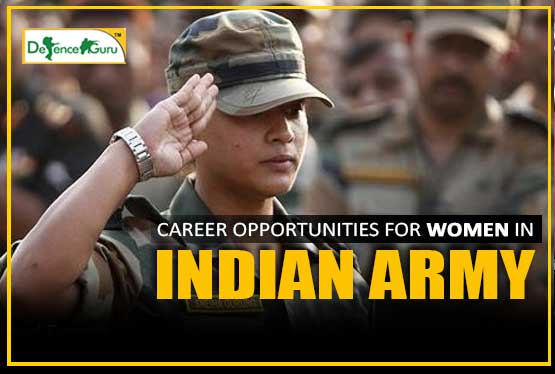 Well certainly dolling up in your shimmery attires and tip toeing the streets in those stunning heels is not what all girls are made up of, some are made of steel and know well how to steal the lights and thunder in their combat boots as well. Certainly we are talking of the new age girls- the empowered, confident and self reliant women who are worth saluting in every way and women in uniform are a shining example of this. So, in this article we will be dealing with a plethora of employment opportunities available for women in the Indian Army. Let’s ponder over the same-

Way back since 1992 women candidates were being inducted into Indian Armed Forces displaying an exemplary amount of valor and professionalism. Women earlier were limited to only joining the Army Medical Corps, the Army Dental Corps and the Military Nursing Service but as of now the Indian Army boasts of a proud 5,660 women officers of which 4,224 are in medical and nursing services while 1,436 are in various other branches and to garner more women into the forces and to boost their confidence the government has granted permanent commissioning to women officers in Indian Army.

Tremendous options and opportunities behold for young women in Indian Army as the Indian Army is the widest branch of Indian Armed Forces and in this section we will abreast you of the opportunities available for all the girls who wish to be a part of this reputed cadre.

Life as a lady cadet in the Indian Army has no parallel and is something unimaginable and one of a kind of sorts so all the ladies out there who want to roll in some action with that rush of adrenaline and a love for adventure, the time is right to pull up your socks and make a smart career decision with gaze and pride and be a part of this premier brigade and join the Indian Army.