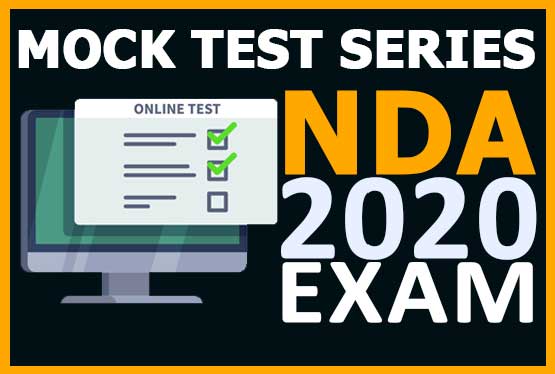 Quick review on the on-going NDA exam pattern conducted by Union Public Services Commission or UPSC to recruit candidates in the Indian Army, Navy and Air Forces. In order to crack such prestigious exam, one must not miss study tool available in online or offline mode of Centurion Defence Academy. The Online Test Series for NDA exam preparation with defenceguru.co.in portal is now available where you can get all the latest updates, study material, syllabus, exam pattern of the upcoming NDA 2020 exam. The following NDA Mock Test Series article is manifested with complete understanding of the NDA exam syllabus, paper pattern, preparation tips for better results from the most reliable coaching of NDA exam.

In today’s time various sources are available from where you can extract the required information that suits best your exam preparation. Here from first day to last day necessary factual and brief details are provided to you by the top rankers. NDA-I 2020 briefs for beginners:

An overview of 2 sections in the written exam explained:

NDA 2020 Syllabus for Section-2 English consists of 200 marks of the following topics: Grammar and Usage, Vocabulary, Comprehension, and Cohesion.

The complete syllabus designed for NDA 2020 upcoming exam are above provided, below given a perfect way that can help you to accomplish your NDA 2020 result. An online guidance surpassing all communication barriers in both Hindi and English language in the form of Defence Guru Online Test Series is now available in just one click. It is specialized and uniquely designed by experts and R&D team of defence guru make us a unique, reliable and superior from other test series.

Our mock tests provide students with an authentic experience of the level of NDA. Defence Guru Online Test Series to practice and solve latest mock test for NDA exams. A multitude of mock tests will help you prepare for NDA entrance exam knowing the current level of your preparation and improve upon the same to achieve success.

1. Be thorough with the NDA latest syllabus and exam pattern.

3. Practice the basic formulae/ concepts from Mathematics, Physics and Chemistry.

4. Plan a preparation schedule and practice as many NDA Practice Papers as possible.

5. In English section, focus on reading comprehension, basic grammar and vocabulary and revise the basic grammar rules from a reliable source.

6. Be well aware of current affairs and events that are making news.

7. Make sure the political and historical scenario of India is on your tips.

What we learn with practice we never forget and to foster that spark within you unlock defence guru online test series extensive collection of NDA mock tests and gear up your preparation.

A candidate who has been recommended by the Services Selection Board will be subjected to a medical examination conducted by a Board of Service Medical Officers[...]