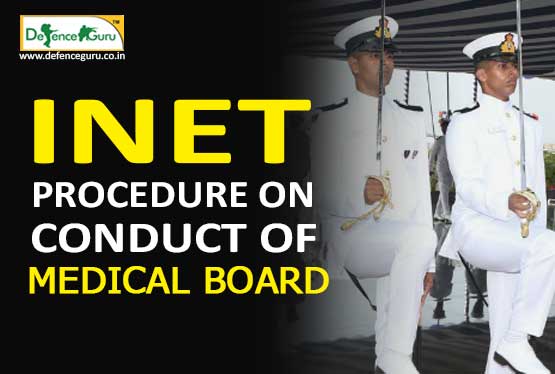 In this handy article the INET Examination Medical Board standards are covered entirely for the young aspirants who are applying for the upcoming INET examination.

INET Medical standards given below help you in medical examination preparation while a quick review on medical journey of INET 2020 achiever, help you get a clear picture of INET medical. Akshay Khanna who got recommended in Indian Navy through INET Entry in his 1st attempt has stood medically fit in INET Medical without any temporary rejection tag on him. Akshay personal experience at the ground level will give you a clear picture how the medical procedure is conducted and what should be your strategy towards its achievements.

If there is temporary rejection then you have more chance to apply in Review Medical Board where President and Doctors are present. They Review the reports and can overrule the final medical judgment in your favor.

D (a) Visual standards for Officers’ Entry into Executive Branch will be as follows:-

D (b) Visual Standards for Officers’ Entry into Technical Branches will be as follows:-

D (d) LASIK may be allowed subject to the following conditions:-

During the medical examination of candidates, the following principal points will be ensured:

Major defects for rejection in INET are as under:-

The candidate must be physically fit according to the prescribed physical standards.

Indian Navy Tattoo Rule
Permanent body tattoos are only permitted on the following body parts only, for which a candidate will be required to sign a Self Certification Certificate:-

Permanent body tattoos on any other part of the body are not acceptable and candidates will be barred from further selection.