Know About the Legends of Indian Armed Forces 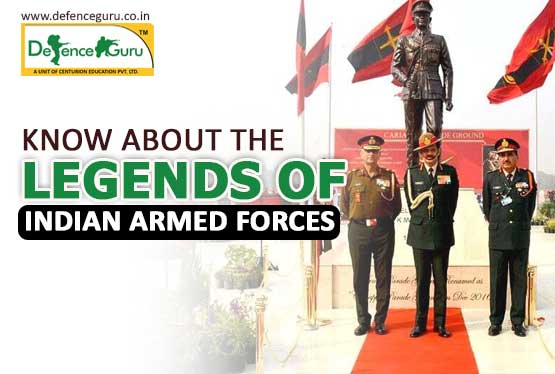 “Either you surrender, or we Wipe you out” – Field Marshal Sam Manekshaw (then General) To Pakistan on 13th December 1971.

Devotion to duty and outstanding bravery marks a military gentleman with a Field Marshal’s baton in his knapsack and an impediment in is hope. The must read interesting facts about the legends of Indian Armed Forces presented in this article, motivating force that drives the young minds.

A Field Marshal is the five-star rank and highest attainable rank in the Indian Army. Though the rank is placed above General, it is not observed in the regular structure. They wear a full uniform on all ceremonial occasions.

Arjan Singh has remained a source of inspiration to fellow Indians and Officers. His simple formula for success is summed up in a few words by him.

Firstly, you should be thorough in your profession of everyone;

Secondly, complete the job at hand to the satisfaction of everyone;

Thirdly, you must have implicit faith in your subordinates;

And fourthly, your efforts should always be honest and sincere.

An incident from the glorious life of Field Marshal Sam Manekshaw fills the youngster with the best lesson of life.

A young officer was on his round when one of the riflemen did not notice him and missed saluting him.

The youngster got cheesed off and summoned the Gorkha and asked him the reason for not saluting him. The Gorkha innocently gave out the reason that he did not see “Lieutenant Huzoor”.

The youngster not convinced, punished the Gorkha to a thousand salutes. The soldier immediately started saluting…

Field Marshal Sam Manekshaw who was passing by and asked the youngster as to what was happening. The youngster said, “Sir, this soldier had the audacity of not saluting me. So I have punished him with 1000 salutes.”

Sam replied, “Bloody good punishment young man, but ensure that you return each of his salutes.”

For the next two hours the unit was treated to a scene of a Gorkha saluting and the young officer returning each of his salutes.

This incident depicts a strong message from Field Marshal Sam Manekshaw in Indian Army that RESPECT IS A TWO WAY STREET!

An inspirational message draws the attention of everyone inspiring to attain the highest rank in the Indian Army and Indian Air Force, a rank which only handful of officer has ever received.