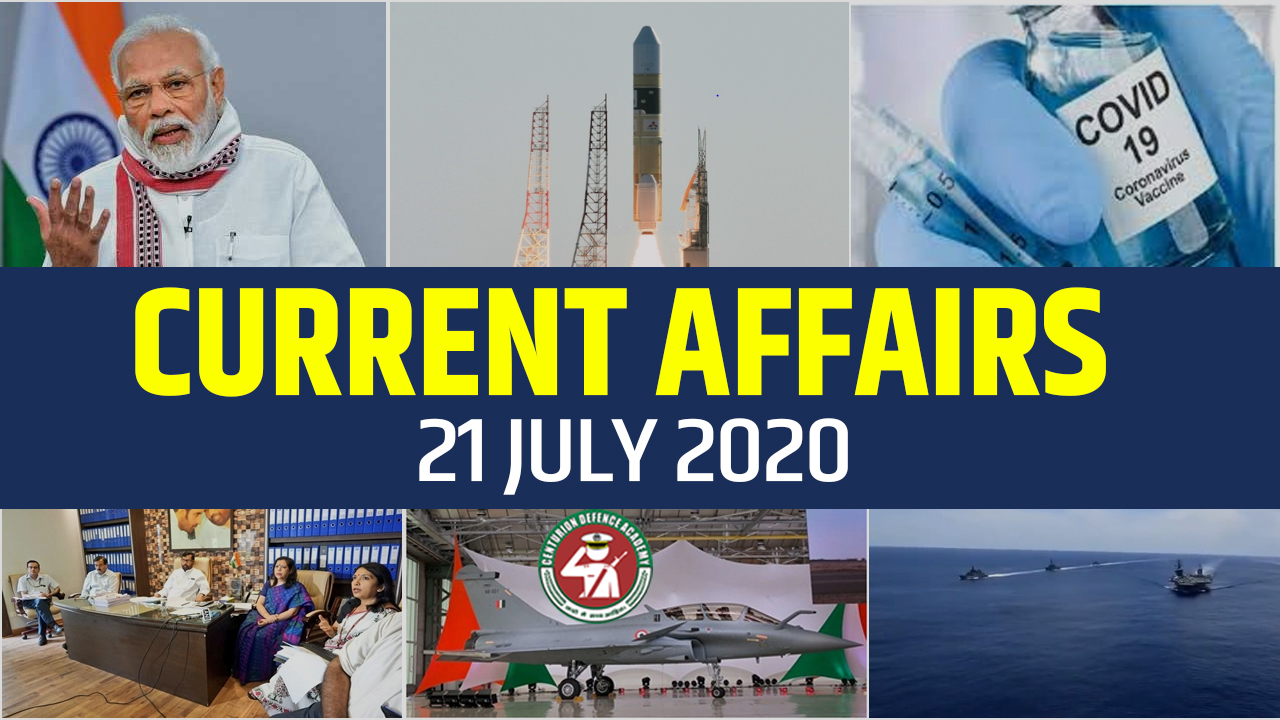 Here are the Current Affairs For 21 July 2020, Important from the view point of all Defence Exams.Go through, and easily prepare your self study notes.

Minister of State for HRD, Secretaries of the Department of Higher Education and the School Education and Literacy, and senior officials of the ministry will also be present on the occasion.

Through a video tweet, Mr.Pokhriyal informed that during the COVID pandemic, the HRD Ministry felt the need to focus on continuing education on the academic front and the mental well-being of the students. He further informed that the Ministry has, therefore, taken up an initiative, named, ‘MANODARPAN’ covering a wide range of activities to provide Psychosocial Support to students for their Mental Health & Well-being during the COVID outbreak and beyond.

The HRD Ministry also stated that the 'Manodarpan' initiative has been included in the Atmanirbhar Bharat Abhiyan, as a part of strengthening human capital and increasing productivity.

The early-stage human trial data of a COVID-19 vaccine developed by AstraZeneca and Oxford University reveals that it is safe and induces immune response, with mild side effects in some participants.

The preliminary results of the phase I/II trial, published in The Lancet journal, involving 1107 people show that the injection led to them making antibodies and T-cells that can fight coronavirus.
Prof Andrew Pollard, from the Oxford research group said, the results are promising.

The study showed 90 percent of involved people developed neutralising antibodies after one dose.

Only ten people were given two doses and all of them produced neutralising antibodies.

Prof Sarah Gilbert, from the University of Oxford, UK, said there is still much work to be done but these early results hold promise.

The vaccine - called ChAdOx1 nCoV-19 - is being developed at unprecedented speed.

3-UAE launches its first space mission to Mars from Japan

UAE’s historic journey to Mars has been successfully started from the Tanegashima Space Center in Japan. The spacecraft Hope Probe took off in an early morning launch.

H2A, the rocket carrying the Hope Probe to space, was launched from the Tanegashima Space Centre in Japan. It is the Arab world’s first interplanetary landmark mission, putting UAE firmly ahead of all the countries in the Middle East in the area of space and technology.

Hope Probe Spacecraft is expected to reach the Red Planet by February 2021, to coincide with UAE’s 50th anniversary of its formation.

The orbiter Hope is expected to take images and send back data of the distant Red Planet.

The Consumer Protection Act, 2019 came into force yesterday. Briefing the media about the new law through a video conference in New Delhi yesterday, Consumer Affairs Minister Ram Vilas Paswan said that this new Act will empower consumers and help them in protecting their rights through its various notified Rules and provisions.

The first batch of five Indian Air Force Rafale is likely to arrive in India by end of this month.

Indian Air Force said, the aircraft will be inducted at Air Force Station Ambala on 29th July subject to weather.

Indian Air Force aircrew and ground crew have undergone comprehensive training on the aircraft, including its highly advanced weapons systems and are fully operational now.

Post arrival, efforts will focus on operationalisation of the aircraft at the earliest.

Indian Navy undertook a passing exercise with the US Navy in the Indian Ocean Region.

US Navy carrier strike group, led by USS Nimitz and Indian Navy conducted the maritime drills, PASSEX, which aims at further enhancing interoperability between Navies of both the countries.

The Nimitz Carrier Strike Group is on its way to be deployed in the Gulf region from the South China Sea.

7- Prime Minister ShriNarendraModi will deliver the keynote address at the India Ideas Summit on 22 July.

Prime Minister ShriNarendraModi will deliver the keynote address at the India Ideas Summit on 22 July.

The Summit is being hosted by the US-India Business Council. This year marks the 45th anniversary of the formation of the Council. The theme for this year’s India Ideas Summit is ‘Building a Better Future’.

The virtual Summit will feature high-level presence from Indian and US government policymakers, state-level officials, and thought leaders from business and society. Other key speakers at the Summit include Minister of External Affairs Dr. S Jaishankar, U.S. Secretary of State Mr. Mike Pompeo, Senator of Virginia and co-chair of Senate India Caucus Mr. Mark Warner, Former U.S. Ambassador to the United Nations Ms. Nikki Haley, among others. The Summit will witness discussions on areas including India-US cooperation and future of the relation between the two counties in a post pandemic world.