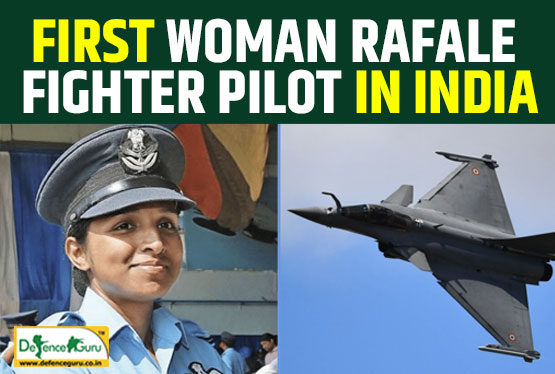 The real flight is set to begin for the first woman fighter pilot, Flight Lieutenant Shivangi Singh, who will fly the deadliest beast Rafale fighter aircraft into airspace. Flt Lt Singh, who studied at the Banaras Hindu University, will officially join the Ambala-based No 17 squadron, also known as 'Golden Arrows', after the completion of conversion training.

Shivangi Singh, who hails from Uttar Pradsh’s, eVaranasi, became the first woman fighter pilot of India to fly the Rafale combat aircraft.  Presently, Shivangi Singh, who had been flying the MiG-21 Bison aircraft, is undergoing conversion training, which is necessitated when a combat pilot shifts from one fighter to another one. Till recently, she was reportedly serving at a fighter base in Rajasthan.

Overjoyed over Shivangi Singh marvelous achievement, her father said, "It is a matter of pride for us. She worked hard, we supported her. We are very happy today." Shivangi Singh, who commissioned into the Indian Air Force (IAF) in the year 2017 as part of the second batch of women fighter pilots is set to fly the 4.5 generation aircraft ‘Rafale’ for India.

Made by French company Dassault Aviation, the Rafale, with its 'omnirole' capabilities, is a 4.5 generation aircraft. "Women fighter pilots are inducted and deployed in IAF as per strategic needs and operational requirements within the laid down policy, which is reviewed from time to time," added the Minister of State for Defence.

Earlier this month, Minister of State for Defence Shripad Naik told Parliament that 1,875 women officers are currently serving in the IAF. Out of 1,875, 10 are fighter pilots and 18 are navigators, said Naik.

The Rafale is a twin-jet fighter aircraft and has HAMMER missiles. It is an omnirole aircraft, which means it can carry out at least four missions in one sortie. Five Rafale combat aircraft were inducted into the Indian Air Force at the Ambala Air Base in Haryana on September 10.