How to Answer - Why do you want to join Indian Armed Forces? 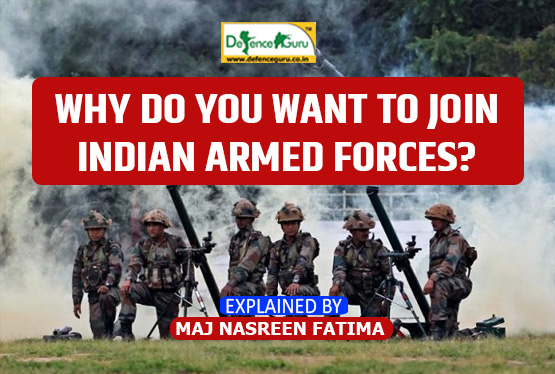 An apt saying, “All our dreams can come true, if we have the courage to pursue them.”

The Indian Armed Forces, a reckoning of sorts and as we all know and possibly imagine is a career that promises undeniably the most admired and appreciated positions in India. The Indian Armed Forces comprises of three wings of professional uniformed services: The Indian Army, The Indian Navy and The Indian Air Force. The Armed Forces is an epitome heralding the principles of service, patriotism, diligence, hard work, perseverance, courage and high moral fiber. It is just not everyone’s cup of tea as being an Armed Officer is a way of life and not just a job that rounds of a 9 to 5 shift. This leads to a very pressing or can we say sort of need of the hour question, Why Indian Armed Forces?

Every candidate who is appearing for their SSB Interviews comes across this most frequently asked question as to “Why does he or she wants  to join the Indian Army, The Navy or The Air Force?” This is one of those several hurdles that the candidates counter and end up being dumbstruck or either end up trying to impress the Interviewing Officer ultimately ending up giving those answers that do not fit or are correct as per the required parameters.

So the question lies, why do you actually want to Join Indian Armed Forces?

To commence with of all plausibility there is no standardized or a perfect answer to this question because every person has his or her own individuality along with their social influences  and priority. Thus,  leading to individual responses which may be the best that they think suits according to their personality. A word of caution whatever be your set of responses it is imperative to keep in mind that this question is a means to evaluate the degree of your motivation for joining the forces because the assessors want to demarcate if you are merely a ‘job seeker’ or you have it in you- the passion and zeal for joining the forces therefore your response should be such that is from your inner self, unbiased, innate and not coached otherwise it would lack the spontaneity and naturality of the hour. So just be genuine and real making your point authentic and convincing to the assessors.

1.- To say you wish to serve your Motherland seems precarious because administrative jobs also serve their nations only, but securing and serving it on the cost of your life and being an active agent in contributing towards the betterment of your society by just making the difference by being motivated and confident to fight in the toughest terrains and harshest of climates to save and fight for your Motherland will make a difference to your answer.

2.- Family background and acquaintances obviously is a prominent inclination factor found in a lot of candidates and stands as a driving force to be a part of this elite force so you can definitely say or give an example of your uncle, father, friend or a relative that inspired you to join this prestigious post as you were inspired by the honor of the uniform and deeply respected the disciplined lifestyle that they led and that made you to decide to lead the life and serve the nation with pride and honor.

3.- Best opportunity in sports and adventure, well you certainly can say that The Armed Forces serve as the best ground for adventure and sports activities and say that you are a sports person and believe in leading an active life rather than being a desk borne and that you like to travel and explore new places, culture and people and what other best way than to join Armed Forces.

4.- Facilities for family, well undeniably Armed Forces provide a very secure and close knit environment and a family which offers abundant support system along with the status, privileges and emoluments attached with serving in this line and use this as your advantage by saying that you believe this is not just a job but a way of life and you earnestly wish to integrate with the same.

5.- Organized lifestyle with a plethora of experiences to gain, obviously being disciplined is the mantra of the Armed Forces and you can speak that leading this organized lifestyle charms me and well will keep my life in a pattern along with keeping my mind and body active.

Another rescuer of sorts can be you can say that the Indian Armed Forces provides a new experience on every step which in turn increases the experience and teaches to handle the toughest and rarest situations thus providing a great learning experience for anybody.

Well to sum up the real life in the forces or out in the battlefield is not a piece of cake. To join and serve the nation and to be a worthy successor of that uniform you have to be mentally tough. As, the glory and charm also leads to the challenges of defence life, which  are endless and so you must  entrust yourself with firm uprooting with this life.