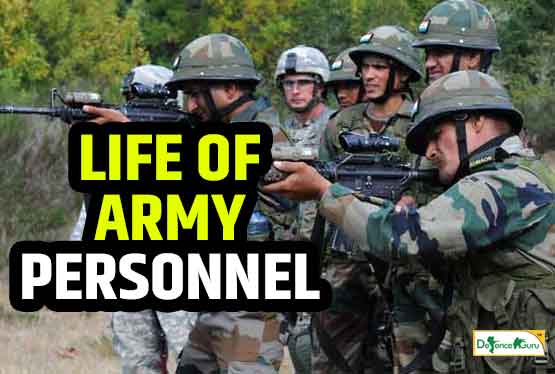 1- What the Army does in peacetime when there is no war on? Some people wonder and believe that they live a life of luxury and pass their time by engaging in physical parade, games and sports or physical fitness training. This is not complete truth, as they also prepare themselves for operational readiness. Our army is deployed all along the Himalayan borders with China and along the LOC in J&K and across the country. Most of these borders are inhospitable, uncongenial in climate, lacking in normal facilities. Even drinking water is not available in some areas.

2- The main function of the Indian Army is to defend and protect the country against all external and internal threats. The army is also called in to help civilians during natural calamities and maintain law and order. The armed forces place a high value when it comes to discipline and the importance of routine. Planning things out and doing them at the same time everyday not only helps them stay on schedule, it actually makes them more efficient at what they do.

3- The army formations deployed on the borders have been busy combating insurgencies in J&K and the Northeast. It is evident that only a small portion of the army gets a chance to stay in a peacetime cantonment areas and that too for short periods.

4- In a peacetime tenure the normal day of a  defence personnel starts before sunrise. Once the Reveille bugle is sounded, Jawans/Officers ‘fall in’ (assemble in rank and file) in sports kit. By then every Jawan has shaved and washed and is ready for physical training (PT). His platoon commander –a JCO, normally inspects him to make sure that he is properly shaved and well turned out. He inspects his dress to ensure that it is clean and well ironed. Now the jawans are moved ‘on the double’ (running) or marched off briskly to the unit parade or  PT ground. In this assembly the whole unit is together. Here the JCOs and then the officers join the parade. The PT, which is the first parade, involves vigorous exercise and running. After the PT, every one disperses for breakfast and assembles for various other training, parades or tasks after an hour’s break. Weapons training, firing, driving training and education classes, as applicable, are carried out till about 12’o clock.

5- At this hour jawans are marched off to clean their weapons and return the weapons and equipment. After this, jawans proceed to the langars for lunch. Officers and JCOs now go to attend the office or administrative work as required.

6- After official working hours, the unit generally has a rest period till the evening games, when every one assembles on the sports ground once again and has to play some game or the other, like volleyball, hockey, football, basketball, practice boxing or swimming. Before the sunset the Retreat bugle is sounded. The flag in the unit’s quarter guard is lowered with great reverence in the presence of the duty officer. Night guards also fall in front of the quarter guard where they are inspected and briefed.

7- By sunset jawans are relatively free and may now wear mufti/ formal dress – a specified pattern of civil clothes. They fall in by their sub-units for the ‘roll call’. At this parade various orders are passed to them along with the next day’s programme. A physical count of all individuals also takes place here. After the roll call Jawans can go to recreation rooms for watching the television or reading the newspaper. Jawans have their dinner early so that they get full rest. After dinner a bugle is sounded ordering ‘lighting out’ (generally about 10 p.m.). Now every jawan, except those on ‘night guard’, go to bed. The JCO and officers’ messes are however open till 10 p.m or so. You will notice that every activity of a jawan is regulated according to rules and parade timings.

8- The Junior Commissioned Officers of the station too follow almost similar routine but they supervise the troops. They receive and follow orders from commissioned Army officers.

10-  During the posting at Counter Insurgency area or in wartime scenario, the role and responsibility changes accordingly of Army personnel. The Indian army has been involved in CI operations almost continuously since independence. Its formations have been active in CI operations in the Northeast since the 1950s and in Jammu and Kashmir since 1990.  While, the regular army units were deployed on CI duties, it also made use of the skills of forces trained and equipped for small unit operations, like the army’s Special Forces, the National Security Guards and the Marine Commandos. The troops of Indian Army continue to monitor and patrol at LOC, LAC and IB for counter-infiltration operations and ensuring the integrity of Indian Territory.

11-  The Indian Armed forces undergo in-service training, training exercises and many joint military exercises to keep up the state of operational readiness.

Thus, the Indian Army plays a very important role to protect the India and its interests. This is accomplished by fighting in armed conflicts when the need arises, by participating in peacekeeping and security duties and maintaining a state of readiness for war.

If you are a female defence aspirant, you must know the weight and height requirements of females in the Indian Army.[...]

Indian Army uses a range of Arms and Equipment for conducting its operations. List some Arms and equipment used by Indian Army are following as[...]