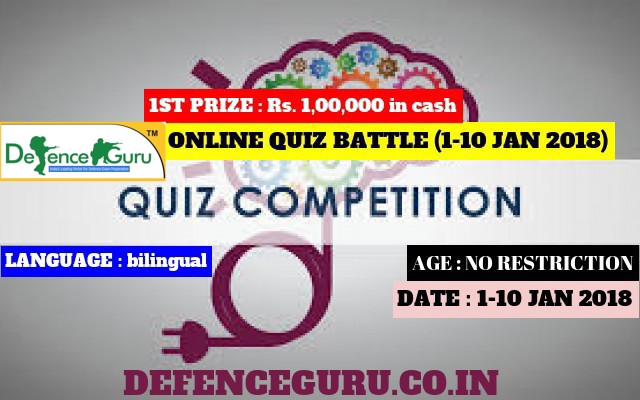 DEFENCE GURU. The Ministry of Defence in coordination with MyGov.in is organizing an online quiz competition on gallantry awards (Param Vir Chakra, Mahavir Chakra, Vir Chakra, Ashoka Chakra, Kirti Chakra and Shaurya Chakra). The quiz would be conducted online from January 1-10, 2018. Questions in the quiz will be primarily based on the information available in respect of the gallantry awards and awardees on online portal www.gallantryawards.gov.inÂ  which was launched on the 15 August 2017. The quiz will be bilingual and questions would be in Hindi and English.

The quiz would be conducted under two categories - one below 18 years of age and another 18 years and above.

The Governmnet would arrange forÂ  the stay and transportation of the winners from outside Delhi for five days [25 January (Arrival in Delhi) to 29 January (Departure from Delhi)].

The winners will be provided 3rd AC rail ticket (including Rajdhani/Shatabdi Express) for to and fro journey or reimbursed this amount. In case of winners in the category below 18 years, arrangements for hospitality of one guardian will also be made. Further, in case of female winners, arrangements for the hospitality of one companion will also be made.

AFCAT-1 2023 Online Written Test is the direct or first step for candidates to qualify for Air force recruitment in Flying and Ground Duty posts, Check Syllabus[...]

Here we are going to discuss the physical eligibility criteria and other requirements especially for Females candidates, who are preparing for AFCAT examination[...]

List of AFCAT-1 2022 Selected Candidates to join AFA for training for various courses commencing from 09 Jan 2023 is placed at Annexure ‘A’. The allotment has[...]