How To Prepare For SSB Psychological Tests 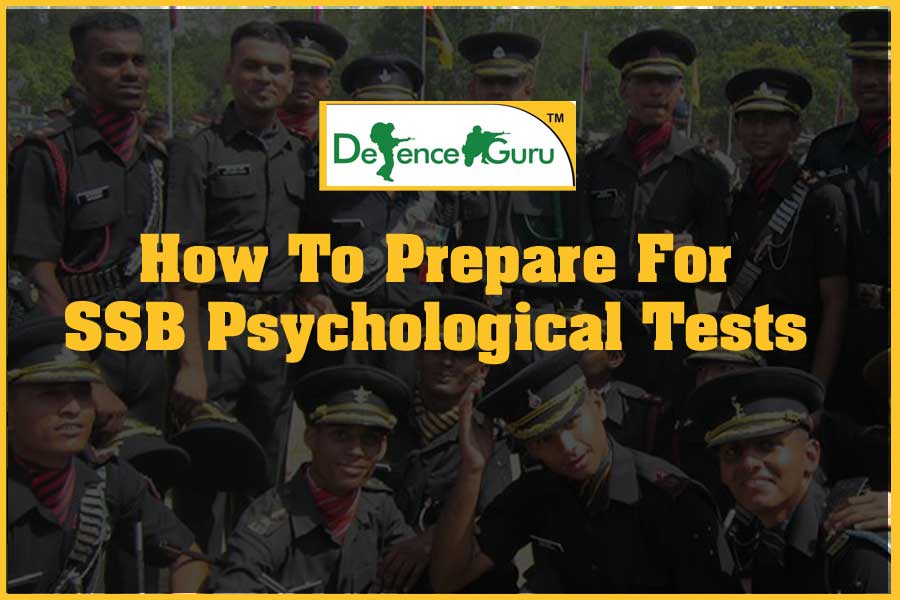 How To Prepare For SSB Psychological Tests

Psychological test plays vital role in SSB interview. Psychological Tests are conducted by the SSB which comes under stage II testing of SSB interview. The primary aim of these tests is to assess the potential of a candidate in terms of qualities or personality traits that are desired in a 'potential officer material'. A highly qualified Psychologist will take your tests at SSB. You can join SSB Coaching for crack the SSB Interview.

How To Prepare For SSB

PT are conducted by a skilled person, usually a psychologist who finds the personality of a person/candidate and evaluates them whether he/she fits for a service(defense) or any job by using different tools and methodology.

There are four tests conducted by the Psychologist

What is Thematic Apperception Test (TAT):-

Thematic appreciation is a projection in which a candidate is shown up a series of picture on that the candidate has to put up his own individual views (stories). This test is based on the details of the pictures shown. A lot of details are created by a candidate on the basis of his own imagination. A problem, a difficult situation/ aim is visualized by a candidate and then the same is sorted out systematically by the central character (Hero) with or without the help of others.

What is WORD ASSOCIATION TEST (WAT) :-

In the test, a candidate associates himself/herself with words given in the test and conveys his/her personality (OLQ) accordingly. A word can be used as a noun, verb, adverb or adjective depending on a candidates convenience. One must take care to be positive even in case of negative words. Through every response, the psychologist judges the personality of a candidate. Candidates are shown 60 words on the screen one after the other. Each word is displayed for 15 seconds in which the response has to be given in form of a short sentence. During  15 seconds that a word is shown to the candidate, the candidate understands this word, creates a response, showing his/her personality and also writes it down in the form of a complete and grammatically correct sentence.

What is SITUATION REACTION TEST (SRT) :-

Situation reaction test is also know as SRT is a series of 60 situations, candidates are required to answer as many as they can in 30 mins. The situations are day to day life situations. One handles them completely and systematically, giving accounts of one’s logic. Normally, the situation is given in the past tense, using third person, singular number and in a brief language. The response should not be abrupt but a logical one.

What is Self Description Test (SDT) :-

Self description test is the last test in Psychologist test series at Service Selection Boards. Self-description test in SSB is one of the Psychology tests and it is used to test, how much you know about you and how people around you see you as a person. In this test the candidate is required to write 5 paragraphs in 15 minutes on What his Parents, Teacher/Employer, Classmates/Friends, Candidate’s own opinion about himself and what qualities he would like to develop for the future.

Word Association Test is a part of the psychology test conducted on the second day of a five day SSB process. WAT assesses the imaginative and logical thinking[...]