What is Territorial Army and How to Join - Full Details 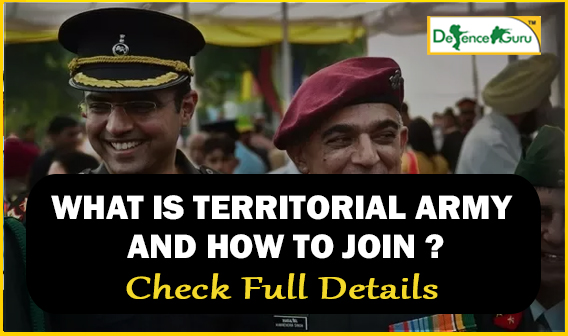 What is territorial army?

Who is eligible for Territorial Army India?

Male and Female citizens of India and Ex-service officers who are medically fit.
Age â€“ 18 to 42 years.
Qualification â€“ Graduate from any recognized university.
Employment â€“ Gainfully Employed in Central Govt/Semi Govt /Pvt Firm/ Own business/Self Employed
Nationality: Only citizens of India (male and female).
Age Limits: 18 to 42 years on the date of application.
Educational Qualifications: Graduate from any recognized university
Physical Standards: A candidate must be physically and medically fit in all respects.
Employment: Gainfully Employed
Note: Serving member of the Regular Army/ Navy/ Air Force/ Police/ GREF/ Para Military and like forces are not eligible.

What is Territorial Army salary?

The recruitment process of TA works under Indian Army and it is managed by Ministry of Defence Government of India. The center of attraction of territorial army is its respectful life, handsome salary with many extra allowances and a good career in the army or even after. The salary structure of the Territorial Army employees fully depends on their rank. According to their rank the salary, basic pay, grade pay, military service pay and extra perks are provided to the employees.

An employee of Territorial Army will get benefits which are mention below:

What is the Selection Procedure of Territorial Army

For Civilian Candidates:
Candidates whose applications forms are found, correct after scrutinization will be called for screening, by a Preliminary Interview Board (PIB), at their respective TA Group Headquarters. Candidates selected by PIB should provide brief BIO-DATA to include details about their employment with monthly income from all sources at the time of documentation immediately after PIB. Successful candidates will further undergo a Service Selection Board (SSB) and Medical Board for final selection

For Ex Service Officers Only

Ex Service Officers of three services as a candidate should send their application alongwith enclosures as mentioned in application form to Addl Directorate General TA, Integrated HQ of MoD (Army), â€˜Lâ€™ Block, New Delhi-01.
The candidates are screened by an Army HQ Selection Board (ASB) held at Addl Dte Gen TA Army HQ, â€˜Lâ€™ Block, New Delhi which is followed by a Medical Board for successful candidates

How to apply for Territorial Army

Keep visiting Indian Army Official website for latest notifications.
Territorial Army Commission has invited applications for the recruitment to the officer posts in Territorial Army. The eligible candidates cam apply for the post on or before 25 June 2019.

(a) Part â€“ 1. Reasoning. The question paper will be designed to test the candidates ability to complete sequences making logical conclusion based on simple patter of numbers, statements, figures, letters etc as may be expected of a rational thinking person without any special study of the subject.

(a) Part â€“ 1. General Knowledge. General knowledge including knowledge of current events and such matters of everyday observation and experience in scientific aspects as may be expected of an educated person who has not made a special study of any scientific subject. The paper will also include questions on history of India and geography of nature which candidates should be able to answer without special study.

(b) Part â€“ 2. English. The question paper will be designed to test the candidatesâ€™ understanding of English and workman â€“ like use of words. Questions in English are from synonyms, antonyms, reading comprehension, Para jumbles, error spotting, jumbled sentences, sentence correction and fill in the blanks