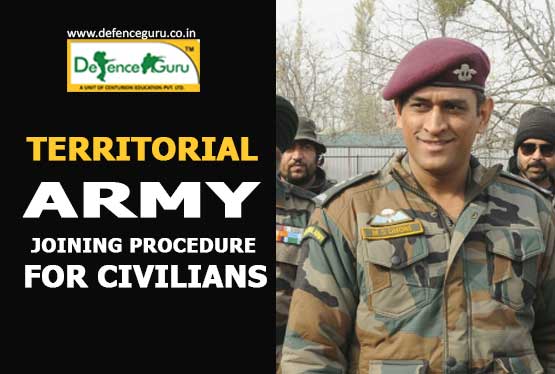 How to join Territorial Army for Civilians

Over a lifetime, working and service of all kinds - military and civilian,the civil participation raises the excellence quotient of India's strength, power and unity.From static duties to maintenance of essential services the country is safeguarded under the  Indian Territorial Army (TA), a second line of defence after the Regular Indian Army.

Pattern for conduct of Preliminary Interview Board Written Exam

Selected candidates in PIB written exam appear for PIB interview followed by Medical examination. After rigid testing and examination process the final merit list is prepared for the selected Civilians in Territorial Army. Selected candidates are allotted to move for training under Indian Army.

(a) One month basic training in the first year of commission.

(b) Two months annual training camp every year including the first year.

The sheer variety, sense of purpose, responsibility and pride, validate job satisfaction in the duty of nation. You can serve the nation in two capacities– as a civilian and as a soldier. Territorial Army is giving an opportunity of donning the uniform and serving the nation as Territorial Army Officers.

Encounter experience of an exceptional lady officer who served in the Indian Air Force and Indian Army. Major Nasreen Fatima, Squadron Leader (Retd.), the first lady Officer from the Indian Air Force in the Territorial Army. She is commissioned in Indian Air Force as a Short Service Commissioned Officer in Education Branch for tenure of 10 years and currently working as an Academic Head in Centurion Defence Academy, one of the renowned defence institute in India offering maximum numbers of Officer level selection each year.

How to join Territorial Army (Civilian)