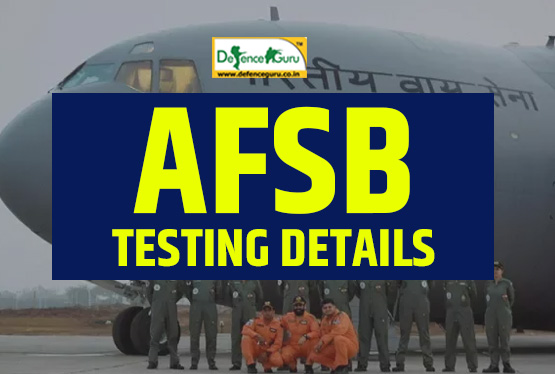 Aspirants declared successful in the written examination of AFCAT have to appear for the next phase of the selection process referred to as Air Force Selection Board (AFSB) testing. This testing phase lasts for 5 to 6 days. The testing duration is 5 days for the candidates who wish to become a part of the Ground Duty (either Technical or Non Technical) wing of Indian Air Force.  For the rest, i.e. who intend to join the Flying wing of Indian Air Force, the duration is 6 days.

The entire phase of AFSB testing is split into 2 stages. The 1st stage is the screening stage. Aspirants who qualify this stage become eligible to appear for the 2nd stage of the AFSB testing. The rest are asked to leave. There are probable reasons for AFSB to incorporate the screening stage in the testing. The candidates appearing for AFSB testing are provided free boarding and lodging facilities. The screening process not only facilitates optimum utilization of the available material resources, but also accounts for certain other factors for selection.

The screening stage lasts for a day. In this one day long affair, an aspirant appears for two types of assessments. They are Officer Intelligence Rating (OIR) test and Picture Perception and Discussion test. The OIR test evaluates a candidate’s verbal and non verbal reasoning abilities. Next, the Picture Perception and Discussion test determines an aspirant’s attitude towards a certain situation and his or her ability to communicate his viewpoint effectively.

Candidates who are declared successful at the screening or 1st stage proceed for the 2nd stage of assessments. These assessments comprise of psychological tests, interviews and group tests {conducted by Group Testing Officers (GTO)}. They are conducted in a span of 4 days. One of these days is reserved for the interview.

The psychological tests are divided into 4 sections, namely, Thematic Apperception Test (TAT), Word Association Test (WAT), Situation Reaction Test (SRT) and Self Description (SD). Under TAT, an aspirant is shown a total of 12 pictures. Out of these, 11 pictures depict various themes. They may be hazy, semi clear or clear. The examinee is required to compose 11 well planned stories around these themes. The twelfth picture is a blank image wherein a candidate is required to pen down ideas on a topic of his or her choice. By means of this exercise, an aspirant’s perspective is tested. Next, for WAT an examinee is given words. He is required to construct sentences using these words. There are a total 60 words and time allowed to construct a sentence on each word is 30 seconds.  Again, this tests an examinee’s outlook. Further, under SRT, a prospective officer’s reactions to various situations are assessed. He or she is presented with 60 situations to which he or she must respond in 30 minutes. Finally, the SD segment gives an opportunity to the candidate to describe self. The idea behind these psychological tests is to evaluate an aspirant’s outlook on various life situations he or she may come across while serving as an officer in Indian Air Force.

Going further, indoor and outdoor group tests (GT) are conducted by GTO on any of the two days during the first three days of the stage 2 assessments. Day 1 of GT comprises an extempore, two group discussions (GD), Progressive Group Test, Half Group Test and Group Planning Exercise. Progressive Group Test and Half Group Test are team oriented activities. Group Planning Exercise is a group exercise where a problem situation is given to a group along with a relevant map. The group has to function as a team and come up with a solution. Then, one member of the group is required to narrate the solution.

Day 2 of GT comprises of activities such as Individual Obstacles, Command Test, Final Group Test and Snake Race. The test of Individual Obstacles involves overcoming a variety of hurdles. Command Test is an evaluation of leadership skills. Final Group Test is similar to Progressive Group Test; the only difference between the two is that the latter is less difficult than the former. In case of the Snake Race activity, the candidates are required to carry out various group tasks while carrying a snake like object.

Primarily, on day 4 of stage 2 assessments, a board conference is held in which the Air Force Selection Board meets only certain aspirants-select candidates who are seeking careers in the Ground Duty (Technical or Non Technical) wing. Day 5 of stage 2 tests is reserved for candidates seeking opportunity in the Flying branch of Indian Air Force. Such aspirants sit through a Computerized Pilot Selection System (CPSS) test in order to ascertain their suitability for the branch.