Everything about Artillery Regiment 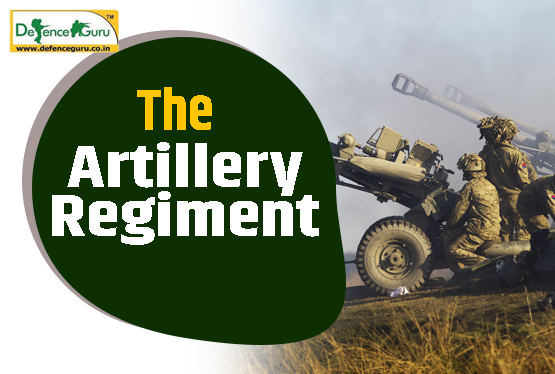 Often referred to as the army combat that is the game changer or the tide turner by unleashing its lethal depository of guns, firepower, howitzers, etc., the soul of the battlefield that can wreck devastation and turmoil to the enemy and is the backbone or forms the base of the Defence Forces.

The Regiment of Artillery is the second biggest regiment or arms of the Defence forces, next to infantry regiment that is pivotal in helping the nation to win many battles post the Independence Era with its decisive tactics and techniques in Counter Insurgency operations in Jammu and Kashmir as well as in the North east and the famous Kargil War of 1999.

The artillery is the game changer and changes the tide and course of a battle with its repository of ammunitions, missiles including vast collection of field guns, mortars, howitzers, rockets, missiles, radar systems and even Unarmed Aerial vehicles (UAV’s) that are all stationed at key positions in order to provide surveillance and security to demolish the enemy or the target with its heavy ammunitions and guns. The Artillery can thus be called as the cover or the protector realm of the Infantry/ Armored Corps in helping them take charge or assault swiftly by guarding and covering their movement, capturing key positions to take down the enemy.

The Artillery has rightly been labeled as the “God of War” because of the gravity and impact it has in altering the true course of a war with its lethal discharge of ammunitions and firepower in the battlefield. Its motto is Sarvatra Izzat-o-Iqbal (Everywhere with Honour and Glory) which is the the Hindustani equivalent of the Royal Artillery motto Ubique Quo Fas Et Gloria Ducunt (Everywhere That Right And Glory Lead) with its insignia as a gun with a star of India placed above it.

The regiment has been classified into various units depending on the weaponry they possess and their roles during the combat. Broadly they are classified as-