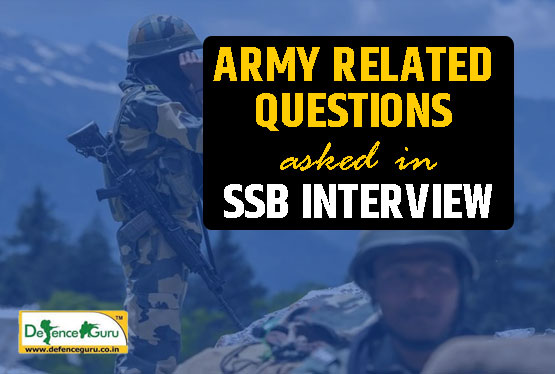 The Indian Armed Forces comprises mainly of a three winged association of The Indian Army, The Indian Air Force and The Indian Navy. It becomes all the more imperative and mandatory to be well versed with all the major information as well as the minutest of details of the service you have applied and are appearing in SSB. Normally it is very common that the questions also will pertain or will revolve around the service or the choice you have made as you must know each and everything of that field. Let’s take a look at some of the basic questions related to Indian Army-

The above assimilated questions are based on the basic knowledge and general know how of the Indian Army and are common questions and topics of the SSB. The candidates must be vigilant, aware and prepare for these questions related to the Indian Army- be it the minutest or the most technical one because one must be fully aware of the services he or she entrusts to be a part of. Those who have attended the NCC training are more prone and have a better edge related  to the internal knowledge and working of the Indian army. A prior practice and knowledge of these questions will help you give an impressive presentation of your answer. So prepare for it and add those brownie points in your performance and impress the assessors with your confidence and knowledge.