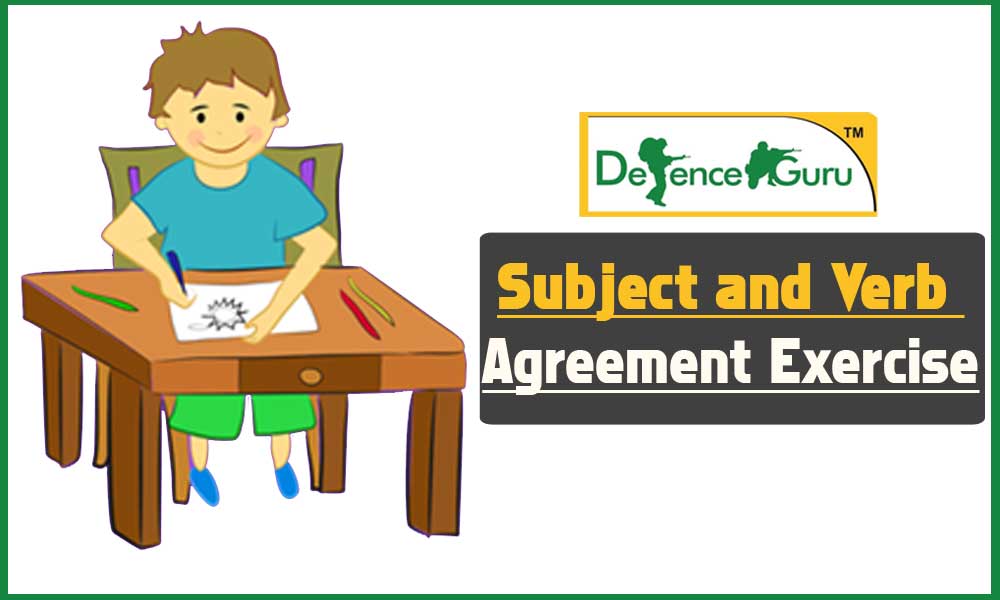 Choose the correct form of the verb that agrees with the subject.

2. Either my mother or my father (is, are) coming to the meeting.

4. Either my shoes or your coat (is, are) always on the floor.

5. George and Tamara (doesn't, don't) want to see that movie.

8. The man with all the birds (live, lives) on my street.

9. The movie, including all the previews, (take, takes) about two hours to watch.

16. Eight dollars (is, are) the price of a movie these days.

1. Annie and her brothers are at school.

2. Either my mother or my father is coming to the meeting.

3. The dog or the cats are outside.

4. Either my shoes or your coat is always on the floor.

5. George and Tamara don't want to see that movie.

7. One of my sisters is going on a trip to France.

8. The man with all the birds lives on my street.

9. The movie, including all the previews, takes about two hours to watch.

11. Either answer is acceptable.

12. Every one of those books is fiction.

13. Nobody knows the trouble I've seen.

16. Eight dollars is the price of a movie these days.

17. Are the tweezers in this drawer?

19. There were fifteen candies in that bag. Now there is only one left!

20. The committee debates these questions carefully.

A singular subject (she, Bill, car) takes a singular verb (is, goes, shines), whereas a plural subject takes a plural verb.

Example: The list of items is/are on the desk.
If you know that list is the subject, then you will choose is for the verb.

Rule 1. A subject will come before a phrase beginning with of. This is a key rule for understanding subjects. The word of is the culprit in many, perhaps most, subject-verb mistakes.

Hasty writers, speakers, readers, and listeners might miss the all-too-common mistake in the following sentence:

Incorrect: A bouquet of yellow roses lend color and fragrance to the room.

Examples:
My aunt or my uncle is arriving by train today.
Neither Juan nor Carmen is available.
Either Kiana or Casey is helping today with stage decorations.

Rule 3. The verb in an or, either/or, or neither/nor sentence agrees with the noun or pronoun closest to it.

This rule can lead to bumps in the road. For example, if I is one of two (or more) subjects, it could lead to this odd sentence:

Awkward: Neither she, my friends, nor I am going to the festival.

If possible, it's best to reword such grammatically correct but awkward sentences.

Rule 4. As a general rule, use a plural verb with two or more subjects when they are connected by and.

Example: A car and a bike are my means of transportation.

But note these exceptions:

Exceptions:
Breaking and entering is against the law.
The bed and breakfast was charming.

In those sentences, breaking and entering and bed and breakfast are compound nouns.

Rule 5a. Sometimes the subject is separated from the verb by such words as along with, as well as, besides, not, etc. These words and phrases are not part of the subject. Ignore them and use a singular verb when the subject is singular.

Examples:
The politician, along with the newsmen, is expected shortly.
Excitement, as well as nervousness, is the cause of her shaking.

Rule 5b. Parentheses are not part of the subject.

Example: Joe (and his trusty mutt) was always welcome.

If this seems awkward, try rewriting the sentence.

Rule 6. In sentences beginning with here or there, the true subject follows the verb.

Examples:
There are four hurdles to jump.
There is a high hurdle to jump.
Here are the keys.

The word there's, a contraction of there is, leads to bad habits in informal sentences like There's a lot of people here today, because it's easier to say "there's" than "there are." Take care never to use there's with a plural subject.

Rule 7. Use a singular verb with distances, periods of time, sums of money, etc., when considered as a unit.

Examples:
Three miles is too far to walk.
Five years is the maximum sentence for that offense.
Ten dollars is a high price to pay.
BUT
Ten dollars (i.e., dollar bills) were scattered on the floor.

Rule 8. With words that indicate portionsâ€”e.g., a lot, a majority, some, allâ€”Rule 1 given earlier in this section is reversed, and we are guided by the noun after of. If the noun after of is singular, use a singular verb. If it is plural, use a plural verb.

In recent years, the SAT testing service has considered none to be strictly singular. However, according to Merriam-Webster's Dictionary of English Usage: "Clearly none has been both singular and plural since Old English and still is. The notion that it is singular only is a myth of unknown origin that appears to have arisen in the 19th century. If in context it seems like a singular to you, use a singular verb; if it seems like a plural, use a plural verb. Both are acceptable beyond serious criticism." When none is clearly intended to mean "not one," it is followed by a singular verb.

Rule 9. With collective nouns such as group, jury, family, audience, population, the verb might be singular or plural, depending on the writer's intent.

Examples:
All of my family has arrived OR have arrived.
Most of the jury is here OR are here.
A third of the population was not in favor OR were not in favor of the bill.

Anyone who uses a plural verb with a collective noun must take care to be accurateâ€”and also consistent. It must not be done carelessly. The following is the sort of flawed sentence one sees and hears a lot these days:

The staff is deciding how they want to vote.
Careful speakers and writers would avoid assigning the singular is and the plural they to staff in the same sentence.

Consistent: The staff are deciding how they want to vote.

Rewriting such sentences is recommended whenever possible. The preceding sentence would read even better as:

The staff members are deciding how they want to vote.

Rule 10. The word were replaces was in sentences that express a wish or are contrary to fact:

Example: If Joe were here, you'd be sorry.

Shouldn't Joe be followed by was, not were, given that Joe is singular? But Joe isn't actually here, so we say were, not was. The sentence demonstrates the subjunctive mood, which is used to express things that are hypothetical, wishful, imaginary, or factually contradictory. The subjunctive mood pairs singular subjects with what we usually think of as plural verbs.

Examples:
I wish it were Friday.
She requested that he raise his hand.

In the first example, a wishful statement, not a fact, is being expressed; therefore, were, which we usually think of as a plural verb, is used with the singular it. (Technically, it is the singular subject of the object clause in the subjunctive mood: it were Friday.)

Normally, he raise would sound terrible to us. However, in the second example, where a request is being expressed, the subjunctive mood is correct.

Note: The subjunctive mood is losing ground in spoken English but should still be used in formal speech and writing.