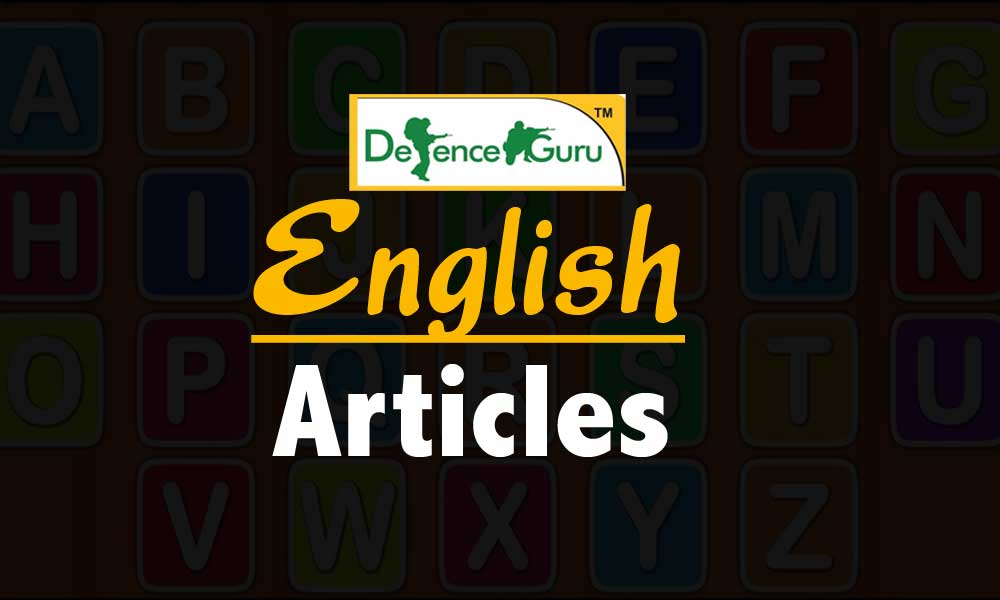 What is an article? Basically, an article is an adjective. Like adjectives, articles modify nouns.

"A/an" is used to refer to a non-specific or non-particular member of the group. For example, "I would like to go see a movie." Here, we're not talking about a specific movie. We're talking about any movie. There are many movies, and I want to see any movie. I don't have a specific one in mind.

Let's look at each kind of article a little more closely.

Indefinite Articles: a and an

"A" and "an" signal that the noun modified is indefinite, referring to any member of a group. For example:

Remember, using a or an depends on the sound that begins the next word. So...

A historical event is worth recording.

Remember that these rules also apply when you use acronyms:

Another case where this rule applies is when acronyms or initialisms start with consonant letters but have vowel sounds:

An MSDS (material safety data sheet) was used to record the data. An SPCC plan (Spill Prevention Control and Countermeasures plan) will help us prepare for the worst.

If the noun is modified by an adjective, the choice between a and an depends on the initial sound of the adjective that immediately follows the article:

Remember, too, that in English, the indefinite articles are used to indicate membership in a group:

The definite article is used before singular and plural nouns when the noun is specific or particular. The signals that the noun is definite, that it refers to a particular member of a group. For example:

The can be used with noncount nouns, or the article can be omitted entirely.

"A/an" can be used only with count nouns.

Most of the time, you can't say, "She wants a water," unless you're implying, say, a bottle of water.

Geographical use of the

There are some specific rules for using the with geographical nouns.

Do not use the before:

Do use the before:

Some common types of nouns that don't take an article are:

DIRECTIONS :Fill in the blanks with correct Articles.

Use an article of a, an or the to fill in each blank so as to complete the sentence.

3 Ans. Look at the white cloud.

4 Ans. The world is a happy place to most people.

6 Ans. Our sun is in fact a star in the universe.

8 Ans. It is an island of great beauty.

9 Ans. To me, it is the only island of great beauty.

11 Ans. Riding a horse is a great experience.

17 Ans. French is the language of the people of France.

19 Ans. The Mekong is an important river.

20 Ans. A European called at my office yesterday.

Use an article of a, an or the to fill in each blank so as to complete the sentence.

1 Ans. She's never been the sort of person to follow the herd.

2 Ans. The pilot requested clearance for an emergency landing.

3 Ans. The government has chartered a plane to carry supplies to the disaster area.

4 Ans. It is the worst disaster in the history of space travel.

5 Ans. The dog got out of the yard through a hole in the fence.

6 Ans. The child has had an unhappy home life.

7 Ans. He showed me a picture of the missing girl in the hope that I might recognize her.

8 Ans. The class teaches young students how to use a computer.

9 Ans. In an ideal world there would be no need for a police force.

10 Ans. With a little imagination, he could visualize the old house as a luxury hotel.

11 Ans. Lincoln had an eerie feeling that the place was haunted.

12 Ans. Plant the seeds at a depth of not more than ten centimeters.

13 Ans. She told us the incredible story of her 134 days lost in the desert.

14 Ans. Dr Dawson received an invitation to speak at a scientific conference.

15 Ans. It would be doing him a kindness to tell him the truth.

16 Ans. In the vast majority of cases the disease proves fatal.

17 Ans. These findings point to the country with the worst record on pollution.

18 Ans. Their help has made a big difference to the team's success.

19 Ans. The other car was being driven right in the middle of the road.

20 Ans. The board of directors wasn't convinced about the accuracy of the report.

Fill in articles (a, an, the) where required.

Example: I bought puppy and pair of kittens. Puppy was quite expensive, but kittens weren't.

Example Ans: I bought a puppy and a pair of kittens. The puppy was quite expensive, but the kittens weren't.

1. Buy me can of beer from store, please.

3. Are you coming for drink with me?

3 Ans. Are you coming for a drink with me?

4. Music is great source of enjoyment.

4 Ans. Music is a great source of enjoyment.

5. There wasn't soul to be seen in park.

6. He decided to enter priesthood.

6 Ans. He decided to enter the priesthood.

7. This is latest news from Olympic Stadium.

7 Ans. This is the latest news from the Olympic Stadium.

8. In rage, she tore letter to pieces.

8 Ans. In a rage, she tore the letter to pieces.

10. Factory had been built on piece of waste ground.

10 Ans. The factory had been built on a piece of waste ground.

11. Mine has few remaining pockets of iron ore.

11 Ans. The mine has a few remaining pockets of iron ore.

12 Ans. The firework display was the high point of the evening.

13. There's place on wall where paint is coming off.

13 Ans. There's a place on the wall where the paint is coming off.

14 Ans. The world record was previously held by a Spanish athlete.

15. Sample of blood was drawn from prick in skin.

15. A sample of blood was drawn from a prick in the skin.

16. As car drew nearer I realized driver was stranger.

16 Ans. As the car drew nearer I realized the driver was a stranger.

17. We grew up in countryside surrounded by beauties of nature.

17 Ans. We grew up in the countryside surrounded by the beauties of nature.

18. Crowd of onlookers had gathered at scene of accident.

18 Ans. A crowd of onlookers had gathered at the scene of the accident.

19. There's only just room for two of us on back seat.

19 Ans. There's only just room for the two of us on the back seat.

20. Over period of ten years he stole million pounds from company.

20 Ans. Over a period of ten years he stole a million pounds from the company.