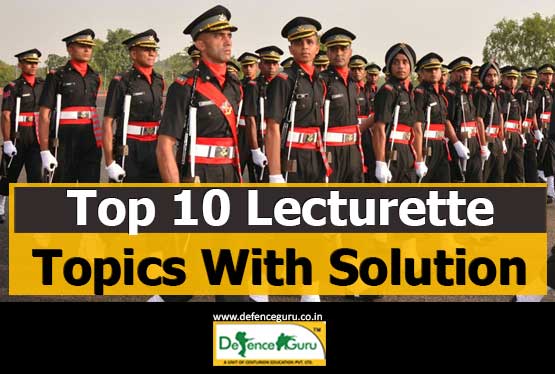 Lecturette round in SSB Interview is a measure of personality, expression, facial index, body language, confidence and attitude of the candidate. Herein candidates preparing for SSB are provided with top 10 lecturrete topics with solution, more you challenge yourself more clearly concepts and facts are developed in your mind.

The top 10 current emerging topics in the present scenario tops the most searched charts of the news platforms, competitive examinations, debate and seminars. Research and daily updates with the latest trending topics will help you to showcase the best intellectual skills at SSB.

The above listed topics for SSB lecturrete are very important for all the candidates who are going for SSB in upcoming weeks or months or years. Extract the most of it and explore various dimensions to excel. Good luck!

Most Important Lecturette Topics For SSB

Officers Like Qualities are of vital importance in the SSB Interview for a thorough evaluation of a candidate's personality traits. Since the aspiring candidate[...]

Candidates, Lecturette is a small talk Which Judges your capability to express yourself in front of the group. In this task GTO has a set of Lecturette cards[...]