What are GTO Tasks in SSB 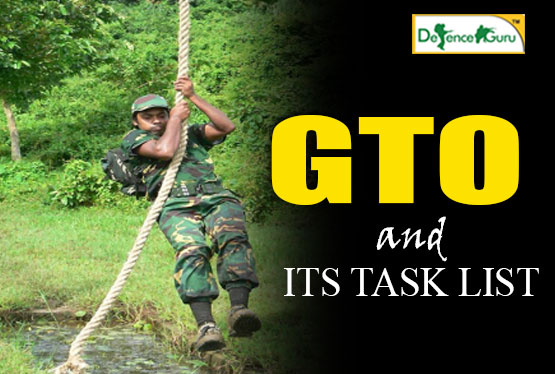 SSB in itself is an opus- a work of art!

Not art literally but yeah a creation that is commendable in so many ways. It’s a rich, comprehensive blend of tests that brings out the real you in manner even you could not comprehend.

Without indulging further in the applause of SSB let me come to the real issue of this article: GTO.

Already sweating, haha… time to relax buddy. This is just a guide to GTO and the various tasks involved in it.

The GTO tests are conducted after the completion of psychological series. GTO is a conglomeration of verbal, group as well as physical tests. Scheduled for the 3rd and 4th day of SSB, it is unique in its pattern and aims to probe in a variety of skills such as: social, narrative, physical strength, co- ordination, patience, intelligence and of course confidence!

First in GTO series is world famous and perhaps the most common session of most of the competitive exams: Group Discussion, that is, G.D. All candidates are divided into groups and they are provided with a topic for discussion. It could be social or current affair. The members have to present their views on the given topic very smoothly. It tests how calmly you tackle the discussion, you clear your narration goes and how well you co- operate with the group mates as well as your knowledge.

Second on list is Group Planning Exercise (GPE). For an intelligent reader the name itself is enough. GPE- Plan it with the group! This is, without doubt, a group task coupled with testing your individual skill. The GTO lays out a map which includes a problem in diagrammatic form. He explains the situation and every candidate has to note down his solution separately succeeding which all of them sit together and chalk out a common plan. Hence, the name ‘group- planning’. The candidates first get 10 minutes to pen down their idea and then the group, as a whole, gets 15- 20 minute to come to final solution and narrate it to the GTO.

Next in series is Progressive Group Task (PGT). This is a group as well as a physical task rather the first outdoor task in SSB. So what goes on here? Well each group is supposed to cross certain obstacles lying on the ground along with carrying a load as per a set of rules given. Not to panic, you are provided helping materials such as wood log, plank and rope. They aid you in crossing the hurdles. As the group goes further the difficulty level mounts up and hence the name ‘progressive’ tasks. PGT assesses not your stamina but your smart work and group co- ordination skill.

Snake Race succeeds the PGT. Revoking your childhood experience, snake race is fun and thrilling. Some stack is folded up in the form of snake and each group has to carry it to the finishing line. But, but, but… while crossing certain obstacles. There is a time frame as well certain rules attached to the task. Snake race tests your physical+ mental stamina along with co- operation skills and team spirit.

After Snake Race comes Group Lecturette. This is an individual task wherein each candidate is given a topic and he has to opine his views on it by giving a lecture for 3 minutes. Everyone sits in a circle and it tests your knowledge+ narration.

Carrying the league of physical tasks forward there is Half Group Task (HGT). This is a continuation of PGT except that the number of candidates in group reduces to half. The rules, obstacles, materials remain the same. HGT provides a fair chance to the GTO Officer to analyze his performance closely.

Individual obstacle is 3rd last test of GTO. Unlike others, this one is individual task so yes you are free to show your skills solely. What happens is that you are given certain obstacle and you have to cross them within a certain time limit. While boys get 10 obstacles, girls get 7. The time limit is 3 minutes and crossing each obstacle gives you separate mark.

Command Task (CT) is up next on the list. Wondering what’s behind the name ‘command’? Well candidates have to again cross certain obstacles but this time with 2 other volunteers/ references provided to them who are going to be commanded by the candidate. So the task is mainly to instruct and that becomes the judging criterion of this task.

The show stopper of all- Final Group Task (FGT) is one more opportunity to perform with a group outdoor. It’s a resemblance of PGT, you have to cross the given obstacles as a group. It is longer and more difficult than PGT and hence is given more time limit and demands better planning and execution. After all it’s the final round of GTO!

Although 9 in number, the various tasks of GTO scouts for the most deserving candidates and moulds them into the best. It is most definitely a highly intelligent combination of evaluation!

Word Association Test is a part of the psychology test conducted on the second day of a five day SSB process. WAT assesses the imaginative and logical thinking[...]